A Place to Heal 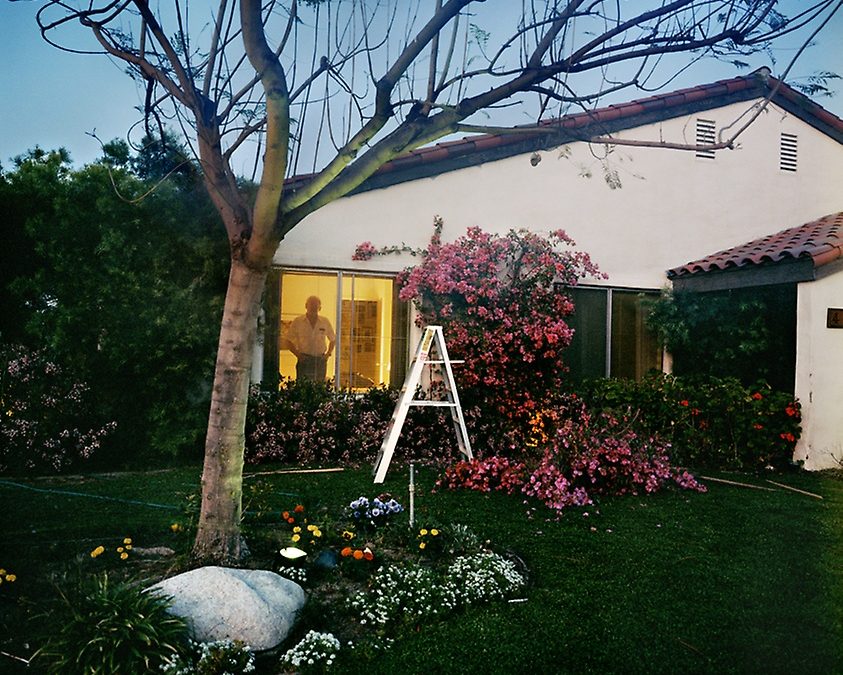 Justin Simpson is six years old and playing with a long plastic bat when two strangers pull up to the curb in front of his grandparents’ house. He scowls. Who are these guys? It’s the photographer and his assistant. They get out of the car, say hi, and start unloading. One hands the boy pink tulips, and he looks at them, surprised. Then he turns and dashes into the house, yelling to his grandmother, “Dita, here! These are for you! I don’t know who they’re from! Some people!”

Sydney Simpson is nine years old, and she’s painted her nails and put on a blue-and-red patchwork dress with a white underdress that peeks out below her hem––not the one Dita has laid out. “Are you going to wear that?” her grandmother asks. “Yes,” Sydney says. “Then at least let me iron it,” her grandmother says. Sydney refuses. “Don’t you think we should?” her grandmother asks. But Sydney is going to be stubborn. She doesn’t want to take off the dress, even to have it ironed. In fact, she seems close to tears. “I think Sydney looks great,” the photographer volunteers. Sydney shoots him a look: Who asked you?

As it turns out, the dress she is so attached to is the same one she wore to her mother’s funeral a year ago, the last time she saw her dad.

Here’s who Sydney and Justin live with now: Nicole’s parents, Juditha (Dita) and Louis Brown; Denise Brown and her nine-year-old son, Sean; Dominique Brown and her six-year-old son, Aaron; and Nicole’s dog Kato. They all live in an unpretentious upper-middle-class home, three blocks from the beach, in a gated Orange County community with friendly neighbors who thoughtfully turn over the tabloids in local stores when family members come in. The living and dining rooms of the Browns’ home are open and sunny, and everywhere you look there are pictures of Nicole. A huge charcoal and colored-chalk sketch of her, framed in gold, dominates one living room wall. There are photos of her on the bookshelves, beside a volume called Mysteries of the Unexplained. At the end of the dining room table is a shrine––red and pink and white roses, lighted candles, angels, Easter bunnies and children’s artwork, all surrounding a photograph of Nicole.

And yet the house belongs to young life. The floors are littered with toys: skates and boogies boards spill out of a trunk; invitations to Easter egg hunts are tacked up in the kitchen. The backyard is a cheerful mess. A boy who is crazy about sports and Power Rangers lives here; a girl who is crazy about jazz dancing lives here. They each have a cousin their own age under the same roof. They have their own rooms, but their beds are trundle beds, just in case they need company through the night.

At first their dad told them he was helping the police find whoever killed their mom. When Dita told Sydney the truth, that her dad was in jail, Sydney said, “I know.”

It’s the day before Easter, a good day to go to the cemetery. Easter and Christmas––Nicole’s two favorite holidays. Everybody’s dressed, neat, faces wiped. They’re all ready, and willing to be photographed. Sydney stakes out a position in the front seat of Dominique’s black Cherokee; the others drift to an identical one that had belonged to Nicole. Should they bring Kato? Dita confides that the dog doesn’t like the cemetery. She wonders: Do you think he senses …. ? But they decide to take him anyway.

The trip from the Browns’ home to the cemetery takes about 20 minutes. Tanya, Nicole’s youngest sister, is already there, sitting cross-legged and rocking back and forth by the simple grave. Justin runs up and gives her a hug and a sip of his orange soda; Dita leans down for her youngest daughter’s hug. Tanya points out the lip balm that someone has left near the stone, among all the flowers. Nic wanted always to have soft lips.

This is the first time since Christmas that they have gathered as a group here. Sydney can’t bring herself to approach the grave. Dominique has to coax her across the grass. When she gets to the grave, Sydney swats at the air with annoyance. She usually spends time with her mother alone.

The family wants to remember this day, but it hurts. While the photos are being shot, Louis takes Kato and heads off. The children, too, need some distance. Released, they race over to a sunny patch uncluttered by graves, where Sydney leads them in ring-around-the-rosy and London bridge, games from the ancient history of childhood.

And once the children have gone, the calm, controlled faces of the Brown women, Dita, Denise, Dominique and Tanya, collapse with emotion. “It is a never-ending task, shielding my pain from them,” Dominique admits later. Denise bites her lip and Tanya burrows against her shoulder. Dominique is crying; Dita reaches out for Tanya. Louis is so far away, walking the fence at the farthest tend of the cemetery, he can hardly be seen.

As it nears time to leave, the photographer suggests gathering the children for one last photo. This time, Sydney comes readily, but Justin doesn’t want to. He’s had to do so many hard things in his life. Instead, he climbs a tree, his nice striped shirt hanging out of his jeans, a first-grade boy with an assignment he just doesn’t feel like doing.

At twilight they are back in the safety and comfort of home. The phone rings. There’s a story that might interest them on a tabloid TV show, so while the kids play outside, Dita and Louis stand uneasily in front of the set and watch. Denise comes in; then Sean, her son, and Justin dash in to say they’re hungry. Justin holds back when he sees that the TV is on; he’s not supposed to watch unsupervised. But Sean notices that the TV is spewing trial news. Nicole was his favorite aunt, and he misses her terribly. “Mom, will you turn that off?” he says, although he is perfectly capable of turning it off himself. Quickly, she does.

On this night, there are two families within the larger family that lives here. There is a family that longs to be understood, to share the burden of its grief with the wider world, to make a connection that might bring meaning to the violence that has visited them; and there is a family that shies from the public, that doesn’t care for the media, that wants to be by itself. Tonight the private family––represented by Sydney and her godmother, Dominique, and her cousin Aaron––wants to go off and have sushi without anybody from a magazine tagging along.

But this is characteristic of the Brown family: Among themselves, they can accept and accommodate everybody’s moods, everybody’s wishes. They can’t change where Sydney and Justin have been; they can’t erase, for instance, the five scary hours the children spent in the police station, refusing candy, wondering why their mom or dad didn’t come for them. But they can make a place where it’s all right for the children to be themselves: hurt children. Sydney is sent off with her aunt and cousin with love and kisses––no problem––and Dita, feeling expansive, and Louis, relieved that the afternoon has gone well and is over, gather the others, including the photographer and his assistant, and lead them to a surf and turf restaurant. The little boys, Sean and Justin, are rambunctious, laughing, chattering, wiggling in and out of their chairs. The adults talk over their heads.

Sometimes at night their aunts or grandparents read aloud some of the notes and cards sent to Sydney and Justin, particularly the ones from children with poems or prayers in them. And the devoutly Catholic Dita always leads her grandchildren in one prayer before bed:

Angel of God, my guardian dear,

To whom God’s love commits me here,

Ever this night be at my side,

To light and guard, to rule and guide.

But this night is unusual. It’s late. The strangers haven’t gone home yet. Dita and the others are still sitting around the restaurant, talking, talking. It doesn’t sound like the grown-ups will ever stop long enough to put him to bed, so Justin closes his eyes, right there at the table, and in the big, wide, comfortable chair, he slumps down and falls asleep.