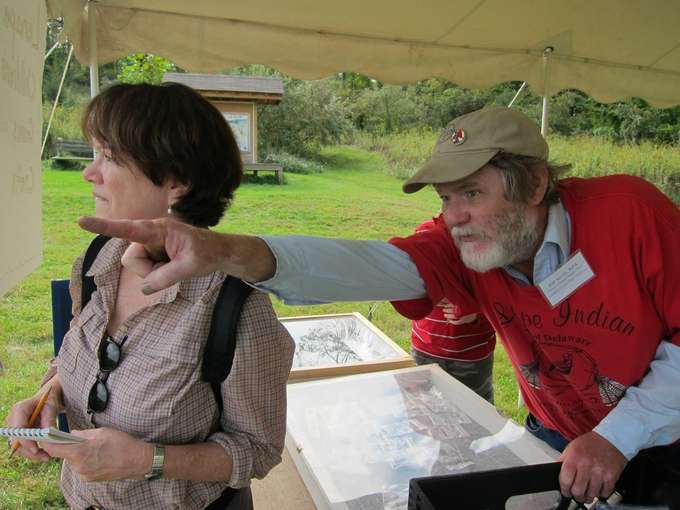 Most of the archaeologists in Marilyn Johnson’s Lives in Ruins: Archaeologists and the Seductive Lure of Human Rubble deal with old or even ancient objects: sunken ships from the Revolutionary War, pottery from the first century BC, or stone points from the Ice Age.The archaeologists in the excerpt below were teaming up with homicide police to learn to excavate crime scenes.—A.B.

I rode shotgun with a CSI team, cruising the back roads of New Jersey’s Pine Barrens with a bundle of red pin flags, looking for places where a drug-addled felon might have dumped the body of his waitress-girlfriend. Our driver was Amanda, a crime-scene analyst in gritty Camden, New Jersey (two tours of Iraq, two young children at home). Squeezed in the back, next to the children’s car seat, were Lorna, a Scottish Ph.D. candidate in toxicology (one layer of blond, asymmetrical hair over a darker layer, two bracelets with skulls), and Alex, master’s degree from Bradford University (West Yorkshire, England) in human osteology and paleopathology, meaning she knew a lot about bones, especially old diseased bones (dark asymmetrical hair, skull necklace). All three were in their twenties, sharp-eyed and competent. What is it about attractive young women and forensics? Did Temperance “Bones” Brennan, hero of the novels by Kathy Reichs and of the television series now in perpetual syndication, anticipate this trend, or inspire it?

Amanda had been late that morning to the Rutgers Pinelands Field Station, where our class in Forensic Archaeology to Maximize Evidence Recovery met, because her GPS had led her to a dirt road a mile or two away. So when we received the police report on the missing waitress, along with a map showing her house, the bar where she worked, and the dump where her boyfriend was employed, Amanda had pointed down at the unpaved fire road where her GPS had led her, a possible route between the waitress’s house and the dump, and said, “That would be a great place to bury a body.” We knew from our morning’s instruction that a killer who knows his victim is more likely to bury her close by; that if the body wasn’t in the backyard under newly poured concrete, it was likely to be somewhere along the route the killer traveled from home to work; and we knew to look for a spot off the road, possibly behind a screen or barrier and near some kind of landmark, so the killer could find the spot again and keep an eye on it. There were exceptions, as our instructor, Kimberlee Sue Moran, pointed out, but criminals behaved in mostly predictable ways.

We had a plan. We pulled out in Amanda’s car and drove onto the dirt road. We saw the other team–two more twenty-something women, a young male anthropologist, and a male homicide detective in his thirties–planting pin flags in the piney woods. “What do they see there?” Alex wondered. We spotted two places along the fire road where a car could pull over. One seemed particularly promising, by a trail with a big pile of natural brush to furnish a screen. In the wet, cold spring of 2014, much of the ground in these woods sprouted moss, but the area behind the brush pile did not; it was a darker color, as if it had come from a deeper layer, and it felt spongy underfoot. Alex pointed. “A piece of rope!” Amanda said triumphantly. Lorna planted several pin flags, then we continued cruising. We were a good team; we found another spot that also looked promising.

I was only a little freaked out by the morning’s instruction. Kimberlee Moran, cheerful, attractive, 35—this field was made for young, tough people—had emphasized that forensic archaeology was simply archaeology, conducted to a more exacting standard. You excavated and bagged artifacts systematically, but separately; you mapped and sketched and photographed at every turn; you guarded vigilantly against contamination; and you followed police procedure, logging every step in the chain of custody and making sure your methodology could stand up in court. No problem. Then: “Let’s share case studies!” Moran had said to start the class, and she and her two assistants had proceeded to tell us stories about the bodies they had encountered and the challenges they faced gathering evidence. I learned some things I can’t unlearn: human kneecaps look like rocks; bones when burnt, shrink and twist. The box of doughnuts in the middle of the table went untouched.

Fortunately, I was not at one of the five body farms in the United States (one memorably described by Mary Roach in Stiff), where those who donate their remains to science are buried, excavated, then studied by law enforcement people and archaeologists. Instead, I was in a corner of the vast and creepy Jersey Pine Barrens where, as John McPhee wrote, “From a gang-land point of view, it makes better sense to put a body in the Pine Barrens than in the Hudson River. A state trooper said to me: ‘Anybody who wanted to commit a murder–all he’d have to do is ride back there with a shovel. They’d never find that body. I always did figure there’s a lot of bodies in there.’” New Jersey does not permit burial and excavation of humans for the purpose of training professionals in forensic skills, so the victim we were looking for, the hapless waitress in our dummy police report, was actually a four-hundred-pound pig, buried by Moran and her team a year earlier. Depending on the temperature and other conditions, a body takes a year to three years to skeletonize–but “we checked it a few months ago,” Moran reported, “and it was still fleshed.”

Unfortunately, neither of our teams had pinpointed the pig’s burial site. Moran and her assistants, Hatza and Eric Young, took us behind one of the outbuildings at the field station and led us down a sandy trail through the woods. We hiked a mile or so to a spot closer to a busy paved road than the fire road. There, in a clearing near a big cistern, was an obviously disturbed piece of ground, roughly rectangular and sagging in the middle; at a certain point, a buried body begins to collapse and the stomach ruptures, leaving a telltale slump in the soil. Moran also pointed out straight edges where a shovel had sliced into the earth. “There are no straight lines in nature, people,” she told us. I maintain that our mistake was in overthinking our criminal’s desire to conceal the body. He was no mastermind, just a panicked criminal; maybe it hadn’t occurred to him that he could find better cover off the fire road than the highway. But what, I wonder, was buried in the sites we did find? We were there for only two days; we had no time to investigate the rest of the Pine Barrens, full as it might be of murder victims. The next day, we had to excavate the pig.

Excerpted from Lives in Ruins: Archaeologists and the Seductive Lure of Human Rubble, published by Harper and reprinted with the author’s permission; copyright 2014 by Marilyn Johnson.