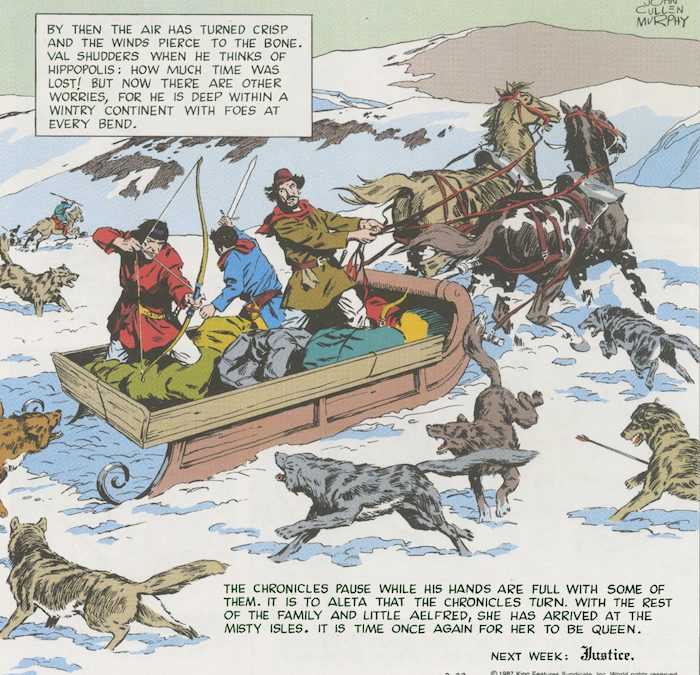 That was my after-school job—pressing down on the shutter release—from around the age of six until sometime in my teens. My father had bought a Polaroid camera in 1949, soon after the first one came on the market, the only instance in his life when he had been an early adopter (if you don’t count Barry Goldwater). Every afternoon he took pictures of himself—maybe four or five, maybe a dozen or two. The camera, a portable Model 95, manufactured by a once-fabled company, was encased in molded leather veneer. Open the front panel and an accordion-like black bellows slid out on a track, the lens at the snout embedded in a proud silvery grille that might have graced a Bentley.

Before I was old enough to hold it steady or to sight through the viewfinder, the camera would be positioned on the shelf of a ladder. Or it would be placed on a table, raised to an appropriate angle and height by a variable foundation of tattered art books—an old Harper & Brothers edition of Howard Pyle’s Book of Pirates; a scuffed, leather-bound Divine Comedy, illustrated by Gustave Doré; Arthur Rackham’s Aesop’s Fables; and George Bridgman’s Constructive Anatomyor his Book of a Hundred Hands. My father would take his place in front of the camera and assemble himself into a pose.

Then he would pull out the exposed film from the end of the camera; wait thirty seconds for the picture to develop inside its sealed chemical packet; peel the finished photograph away from the moist, aromatic backing with a satisfying pfffft; and preserve the image with a swipe of chemical fixative. On the first try, something was usually not quite right with the picture. The rictus of terror was not horrifying enough, the laughter too demure, the pang of grief far below the level of heartrending pathos my father was seeking. He had acquired his mental map of emotional display from watching silent movies as a boy. These movies, with dialogue presented on title cards, had also made him a very good speller, though they don’t explain why he had so many arcane words in his head, such as monopsony and eleemosynary. Visually, he always knew the effect he was looking for in the pictures I took, which was several degrees of enhancement beyond the truly authentic. Sometimes the critique of a photograph was technical or aesthetic. Too much light, or too little. Not sharp enough: I’d likely been wobbling with impatience on the ladder. The gun or the sword would look better in profile— didn’t I think?—rather than frontally foreshortened. A lock of a woman’s wig might have fallen into my father’s eyes, obscuring the desired gleam of ecstasy or grimace of torment. Or the dress he was wearing was all wrong: see, there’s nothing interesting about the way it drapes. Now, Bernini—he could do drapery! 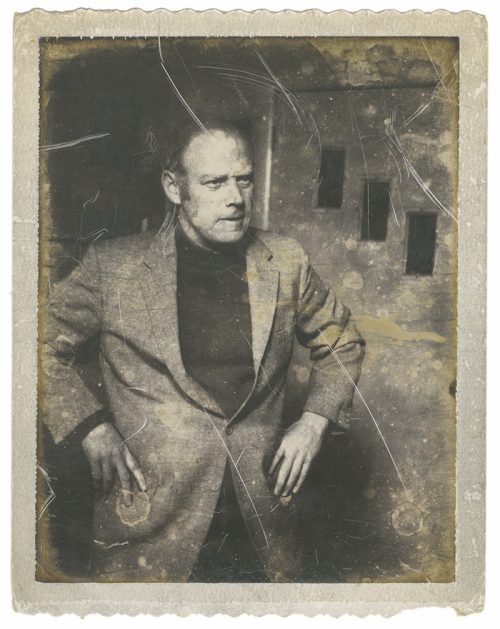 So we would set up the scene again, and perhaps once more after that, until we got it right, and could then move on to the next pose and the next shot. Nothing at the time struck me as unusual about this way of spending an afternoon. My father, John Cullen Murphy, was a cartoonist, and producing comic strips was the family business of many of the people we knew in our corner of Connecticut. He took pictures of himself to assist in the composition of panel after panel of the dramatic strips he drew—initially Big Ben Bolt, about an Ivy League–educated heavyweight prizefighter, and then Prince Valiant, about a dashing knight in the days of King Arthur, the strip to which he devoted most of his career. Other cartoonists and illustrators took pictures, too. I showed my father a photograph, years later, of Maxfield Parrish adopting a stylized pose for a camera, back around 1905, thinking the picture would bestow the benediction of precedent. He professed no surprise—this is what illustrators have always done, his look seemed to say; think of what Leonardo might have achieved if he’d come after Edwin Land!—and simply observed of Parrish, “But he’s not wearing any clothes.” Indeed, in the photograph he wasn’t. My father always wore clothes, selected from a jumbled wardrobe of raiment and accessories assembled over the years in the studio behind our house. The collection included holsters and scabbards, bowler hats and Viking helmets, trench coats and feather boas, kimonos and kilts and skirts, smoking jackets and ladies’ silk loungewear, a Japanese admiral’s fore-and-aft bicorne, an Eisenhower jacket, a pair of cowboy chaps, the robes of a Franciscan monk with a knotted white cincture, a bayonet from the Franco Prussian War, a bishop’s crosier, a toy rifle, two African spears, a maroon fez, and many varieties of shoes and boots. 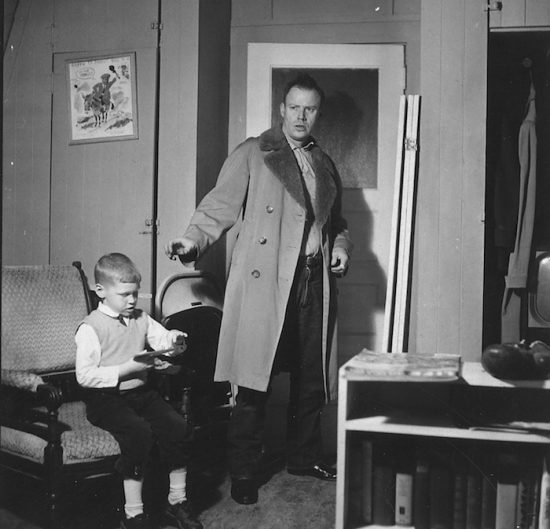 For some reason, my father saved all the Polaroid pictures of himself, even as my younger sisters and brothers took over the photography. The fading squares with their deckled edges were held together by rubber bands and bunched according to some impenetrable taxonomy of his own devising. They filled cardboard boxes that were stored carefully in cupboards and closets, as if one day it might actually make sense to go through them in search of “Jealous Lover at a Fateful Breakfast” or “Death Throes of a Boastful Hun” or “Drunken Friar Telling a Ribald Joke,” rather than just snapping another picture. Snapping another picture is what we always did. The Jealous Lover and Boastful Hun and Drunken Friar, the jousting knight and triumphant boxer and countless other characters, gradually grew older in the photographs at exactly the pace my father did. In other ways the studio seemed outside of time. A mingled smell of Winsor & Newton oil paint and Middleton’s Cherry Blend pipe tobacco was an atmospheric constant. Diffuse light came from a large picture window that faced to the north, as windows in studios typically do. The original camera lasted forty years, and was replaced only when film became impossible to obtain even on what I imagine must have become a lucrative black market sustained in the end by my father alone. Near his drawing table in the studio a grainy black-and-white television, its rabbit ears bent and taped and augmented with wire clothes hangers, would generally be turned on—to a baseball game in the summer and to a classic old movie in the winter. So you knew just from the sounds, the way a naturalist might, that the seasons had changed. 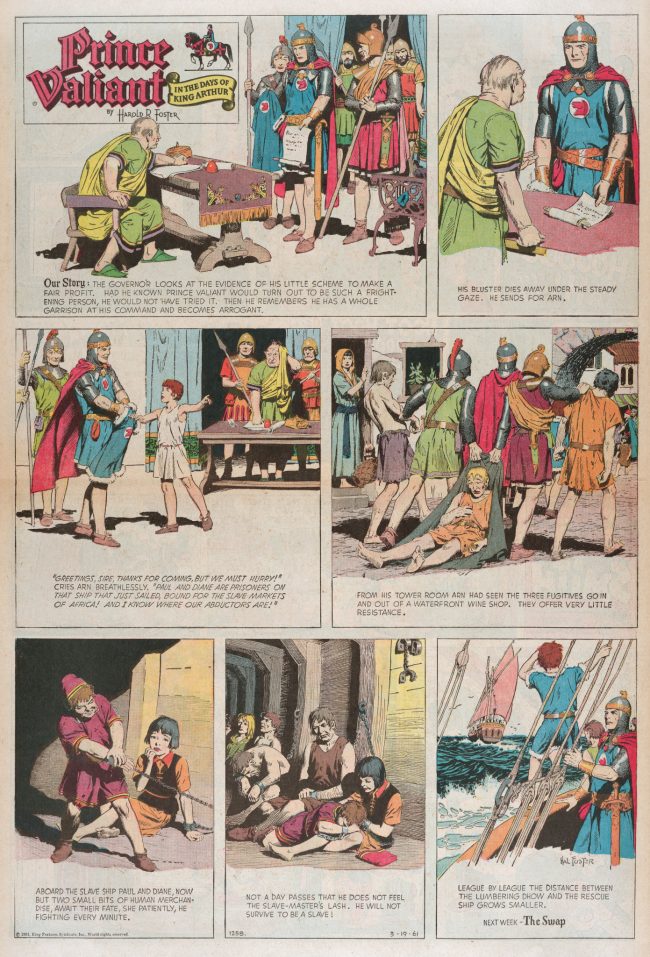 Reality broke in on occasion. A plumber or postman would knock, and in breastplate or cloche hat my father would write a check or sign for a package. A news bulletin would portentously interrupt Roman Holiday or Sands of Iwo Jima: Marilyn Monroe was dead! The Russians had put missiles in Cuba! My mother might arrive to announce a trip to the emergency room, a routine occurrence in a family with eight children. One afternoon, in October 1960, I was standing on the ladder taking pictures when Pittsburgh’s Bill Mazeroski hit his famous ninth-inning home run off Ralph Terry of the Yankees in Game 7 of the World Series, handing the championship to the Pirates. The ladder shook and my father lost his fez. We took the picture again.

On some days an assistant would arrive with sheets of the stiff white paperboard on which comic strips were drawn, the panels blocked out and the lettering penciled, ready to be inked. Other cartoonists would stop in—scores of them lived nearby. There would be talk of new strips starting up and old strips getting new artists. The conversation might turn to the merits and defects of various kinds of pen nibs. Or how to create shadow effects by means of masking tape and toothbrush spatter. Or when the art supply shop was expecting a new shipment of sable brushes. Or what The New Yorker and Esquire and The Saturday Evening Post were buying these days. Or who else had decided to move out from the city.

And then they would be gone and it was back to business: a couple more pictures left to take. I was drawn powerfully to this world of my father’s, yet remember knowing even then that its days were numbered and that before long it would disappear. I wished there was some way to hold on to it forever, not then understanding that in fact there was.