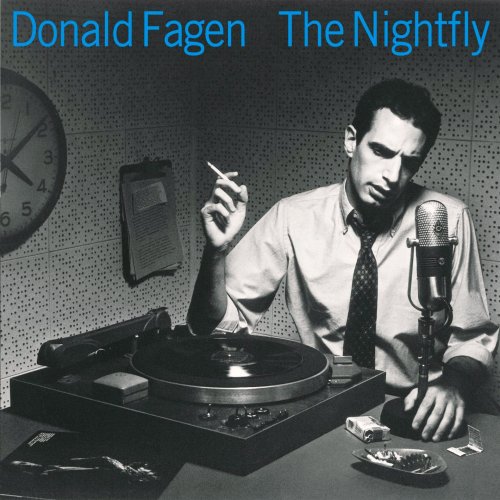 “Lack of irony,” says Donald Fagen with a wry grin, “is not exactly my speciality.” It’s an odd apology—more like a boast—from the man who shared status with his Steely Dan partner, Walter Becker, as a mandarin of pop irony.

But he’s simply trying to explain that when he wrote his current hit song, “I. G. Y.”, he was doing his best to squeeze the lyrics dry of any irony. In fact, his entire solo record, The Nightfly, is a tale told by a young innocent who tolerates his days in a suburban high school but lives for his late-night rendezvous with the jazz music and the fantasies of tropical or oriental romance that his favourite hipster DJ purveys.

The record sounds much like the intellectual swing-time tracks that made Steely Dan famous and profitable. So why is he a solo now? “After fourteen years, we both decided we needed a break. And about the same time, I was getting this idea to do an album that would be more personal than a lot of the stuff we were doing together.” Fagen doesn’t mention Becker’s recent personal torments—the death of girlfriend Karen Stanley and a subsequent lawsuit from her mother, settled out of court—but he’s careful to point out that neither partner held a patent on the Steely Dan sound.

“If and when Walter does something, I think it will still have that same sound, to some extent. He grew up in Forest Hills, me in New Jersey, but he had basically the same kind of childhood musical experience and sensibility, listening to jazz. So I imagine the general sound would be very similar. I just sort of started writing my record after we finished Gaucho and decided to call at least a temporary halt to the collaboration. Since it’s my first album, I thought it should be at least vaguely autobiographical. But I think a lot of the themes have precedents, like ‘Deacon Blues’, on Steely Dan albums.”

The fantasy landscape The Nightfly’s high-school hero inhabits is “a mythical blues country”, but the world he’s escaping from is quite like the one Fagen knew as a 1965 graduate of South Brunswick (NJ) High, “a really idealistic period of the ’60s, when the cold war was on, but technology (e.g., the International Geophysical Year, or I. G. Y.) and nuclear weapons were going to straighten everything out.”

“Steven Spielberg makes movies about the suburbs and seems comfortable with them, but I detested the suburbs I lived in. He has his fantasies, I had mine—I think Thelonious Monk was the alien in my bedroom, rather than a little guy from outer space.”

So it went in the I. G. Y., in the fallout shelter where denizens of the LP”s “New Frontier” hold a party to lust after Tuesday Weld lookalikes and listen to Dave Brubeck. This is the voice of the man-child who will soon learn irony and might end up with a Haitian divorce. But meanwhile, he could stay up late and listen to “the alternative—this hipster talking over the air in the middle of the night, sort of a cultural lifeline to Manhattan or to that blues country outside this rather arid atmosphere of the suburbs. Black music and culture was so much more compelling because it was completely outside my experience. I used to listen to Symphony Sid at the time and a lot of great jazz shows on WRVR. And I’d hear Gene Shepherd, this monologist who was a hipster type who’d talk for forty-five minutes every night. He had a vaguely subversive way of looking at America. And there were the movies that would conjure up the exotic potential for something different than the suburbs.”

Thus the Chinese “squeeze” of the “Green Flower Street”; the Mexican holiday with “Maxine”; “The Goodbye Look” one gets from the sunglassed colonel in some “Graham Greene-ish” banana republic; the “Walk Between Raindrops” on the Florida coast. Somehow these fantasies are engendered in our young man with his ear by the magical radio. “Steven Spielberg makes movies about the suburbs and seems comfortable with them, but I detested the suburbs I lived in. He has his fantasies, I had mine—I think Thelonious Monk was the alien in my bedroom, rather than a little guy from outer space.”

So for young Fagen it was Monk and Miles Davis. “I was a jazz snob, wore black turtlenecks—the only problem was you become sort of a social pariah. I didn’t have many friends.” A call to central Jersey reveals that things maybe weren’t all that bad. His high school yearbook blurb calls him a jazz “enthusiast”, an “individualist”, “the thinker”. Music teacher “Chub” Chatten remembers a shy young man who paced the gridiron with the marching band, solemnly tooting a baritone horn. His mother had been a singer with trad jazz bands, so the very young Fagen was steeped in Sinatra and Sylvia Syms. (“She quit due to stage fright,” says Fagen. “I have a bit of that myself.”) He had an early taste for Chuck Berry, too, but put that aside and ignored rock and blues until his arrival at Bard College. Walter Becker arrived at the small liberal arts school a year after Fagen, who one day heard the B.B. King disciple playing. “I heard this guy practicing guitar. There was actually a college music club and he was rehearsing. I was immediately attracted to his guitar style, which was similar to some of the black blues players. I went in and introduced myself, and that’s how we got together.”

The pair started composing together “very shortly after that. I don’t know if we really had a plan. We wanted to get a band together. Our main problem was finding singers, ’cause I had never sung before. Walter had done a few gigs, before he got to college, at the Night Owl in the Village, so I was sort of hoping he would sing, but neither of us wanted to do it.”

They wrote songs and gigged occasionally while studying theory, harmony and composition. After college, Fagen, a largely self-taught keyboard player, took a year at Boston’s Berklee School of Music. The duo ended up backing Jay & the Americans “in one of their later phases—playing community gardens in Queens, that kind of scene”. Fagen liked playing “behind a wall of backup singers. I wish we had a recording of some of those gigs. It was fun. We’d change chords to the songs, wonder if he was gonna make that long note on ‘Cara Mia’….”

Their friend Gary Katz was working in-house at ABC Records in Los Angeles, and played a demo to company head Jay Lasker. They moved out to LA as “staff writers” for a roster that included the Grass Roots, but “we were so bizarre we had a little trouble getting covers done of our material. The only people who actually ever recorded our tunes were John Kay, the old Steppenwolf guy, and Barbra Streisand.”

By now they’d hooked up with vocalist Dave Palmer and guitarist Denny Dias and with “Reelin” In The Years”, bizarre began to work just fine. The hits kept coming; in retrospect, says Fagen, it’s hard to say who wrote what. “We developed the sound together, it’s very hard to say who did what. Generally, I would develop the original structure and then Walter would fool around with it and then we’d collaborate on the lyrics. Walter was very good on the recording side, he had a definite idea of what he wanted sonically and I learned a lot from him.”

The Fagen singing style, which could be so plaintively effective on songs like “Doctor Wu”, is undimmed on The Nightfly. It partakes of his favorite singers—Marvin Gaye and Mose Allison among them—but has its own, elastic precision. “Dave Palmer was a good singer for us early on, but he didn’t really have the attitude to put the songs over. So I started doing it myself, much to my chagrin. It seems to have worked out.”

Indeed it has. Through a succession of stellar sidemen, Fagen’s voice was the distillation of the Steely Dan sound and attitude. As he sits talking in a Warner Bros conference room, old bandmates Michael McDonald and Jeff Baxter stare at him from a carelessly stashed Doobie Bros cardboard stand-up poster. When, he’s asked, was the last time Steely Dan were heard on stage? “It was 1974, Santa Monica Civic Auditorium. The flip side of ‘Hey Nineteen’ has a live version of ‘Bodhisattva’ if you want to hear what the band sounded like.”

Part of the problem in recording with an ad hoc studio band, says Fagen, is “getting the players to sound like a unit, with its own specific sound”. In making The Nightfly, Fagen used a Yamaha acoustic piano, Rhodes electric piano and Prophet and Oberheim synthesisers. “I play when I feel I can handle it. I have a nice style, but I tend to be a little shaky on the technical side.” Nonetheless Fagen’s LP is definitely space-age. “For ‘I. G. Y.’ we started out with a rhythm machine to get the feel, then used a sequenced synthesiser for the backbeats, then I put down a bass line for reference using the piano, then Greg Phillinganes came in to put the basic thing down using the Rhodes. At that point we had the basic track.”

While Fagen’s solo effort has a musical resemblance to Steely Dan, the words are not so wilfully arcane. “We’ve been charged with obscurism a lot. I think it’s probably true to some extent. Steely Dan’s songs treat subjects that ordinarily aren’t treated in that kind of format. If you listen to the albums, they become a little more lucid in being able to treat a sophisticated subject in a certain space.”

The Nightfly, Fagen says, is a definite throwback to some of his pre-Steelies influences. “The title cut uses a lot of images from blues. That hair formula gets its name from Charley Patton, the old Delta blues guitarist, and Mount Belzoni gets its name from another old Mississippi blues lyric—‘When the trial’s in Belzoni/No need to scream and cry’. It’s music I associate with a time of innocence, and in a way I can say goodbye to that now. That Leiber-Stoller song ‘Ruby Baby’ is a rearrangement of the old Drifters version. I liked the innocence of the lyrics. We needed party noises for it and, since our studio was right next to Studio 54, we surreptitiously suspended a mike from the ceiling of the club during one of Steve Rubell’s ‘business parties’. But it sounded more like a stadium crowd, so we threw a party in the studio. A lot of people got very drunk, and we got our party noises.”

It’s somehow not so far from partying in the fallout shelter. There are no more “hipster presidents” like JFK (Fagen calls his and Lee Harvey Oswald’s televised shootings “a hell of a weekend”) and innocence is hard to come by. Still, Fagen seems determined to spend part of his time lost in blues country; beyond plans to work on a movie soundtrack or two—Robbie Robertson’s asked him for a “jazzy ballad” to go on the soundtrack of Martin Scorsese”s King of Comedy—his program is loose. “I’d like to keep it open, without too much career planning—keep my amateur status, you know?”

[This article is featured in the fine anthology, Major Dudes: A Steely Dan Companion.]