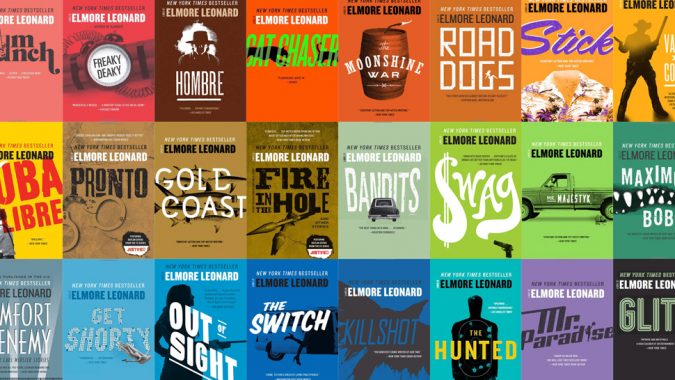 “Dave Flynn stretched his boots over the footrest and his body eased lower into the barber chair.”—The Bounty Hunters (1953)

“At times during the morning, he would think of the man named Kirby Frye.”—The Law At Randado (1954)

“Karla hesitated in the doorway of the adobe, then pushed open the screen door and came out into the sunlight as she heard again the faint, faraway sound of the wagon; and now she looked of toward the stand of willows that formed a windbreak along the north side of the yard, her eyes half closed in the sun glare and not moving from the motionless line of trees.”—Escape From Five Shadows (1956)

“Paul Cable sat hunched forward at the edge of the pine shade, his boots crossed and his elbows supported on his knees.”—Last Stand At Saber River (1959)

“They were watching Ryan beat up the Mexican crew leader on 16mm Commercial Ektachrome.”—The Big Bounce (1969)

“The war began the first Saturday in June 1931, when Mr. Baylor sent a boy up to Son Martin’s place to tell him they were coming to raid his still.”—The Moonshine War (1969)

“Picture the ground rising on the east side of the pasture with scrub trees thick on the slope and pines higher up.”—Valdez Is Coming (1970)

“The train was late and didn’t get into Yuma until after dark.”—Forty Lashes Less One (1972)

“This morning they were here for the melons: about sixty of them waiting patiently by the two stake trucks and the old blue-painted school bus.”—Mr. Majestyk (1974)

“There was a photograph of Frank in an ad that ran in the Detroit Free Press and showed all the friendly salesmen at Red Bowers Chevrolet.”—Swag (1976)

“This is the news story that appeared the next day, in the Sunday edition of the Detroit Free Press, page one: FOUR TOURISTS DIE IN ISRAELI HOTEL FIRE Tel Aviv, March 20 (AP) – A predawn fire gutted an eight story resort hotel Saturday, killing four tourists and injuring 46 others, including guests who leaped from upper-story windows to escape the flames.”—The Hunted (1977)

“The gentleman from Harper’s Weekly, who didn’t know mesquite beans from goat shit, looked up from his reference collection of back issues and said, ‘I’ve got it!’—Gunsights (1979)

“In the matter of Alvin B. Guy, Judge of Recorder’s Court, City of Detroit: The investigation of the Judicial Tenure Commission found the respondent guilty of misconduct in office and conduct clearly prejudicial to the administration of justice.”—City Primeval (1980)

“One day Karen DiCilia put a few observations together and realized her husband Frank was sleeping with a real estate woman in Boca.”—Gold Coast (1980)

“In the winter of 1981 a multimillionaire by the name of Robinson Daniels shot a Haitian refugee who had broken into his home in Palm Beach.”—Split Images (1981)

“Moran’s first impression of Nolen Tyler: He looked like a high risk, the kind of guy who falls asleep smoking in bed.”—Cat Chaser (1982)

“Every time they got a call from the leper hospital to pick up a body Jack Delaney would feel himself coming down with the flu or something.”—Bandits (1987)

“Chris Mankowski’s last day on the job, two in the afternoon, two hours to go, he got a call to dispose of a bomb.”—Freaky Deaky (1988)

“The Blackbird told himself he was drinking too much because he lived in this hotel and the Silver Dollar was close by, right downstairs.”—Killshot (1989)

“When Chili first came to Miami Beach twelve years ago they were having one of their off-and-on cold winters: thirty-four degrees the day he met Tommy Carlo for lunch at Vesuvio’s on South Collins and had his leather jacket ripped off.”—Get Shorty (1990)

“Dale Crowe Junior told Kathy Baker, his probation officer, he didn’t see where he had done anything wrong.”—Maximum Bob (1991)

“One evening, it was toward the end of October, Harry Arno said to the woman he’d been seeing on and off the past few years, ‘I’ve made a decision. I’m going to tell you something I’ve never told anyone before in my life.’”—Pronto (1993)

“Ocala Police picked up Dale Crowe Junior for weaving, two o’clock in the morning, crossing the center line and having a busted taillight.”—Riding the Rap (1995)

“Foley had never seen a prison where you could walk right up to the fence without getting shot.”—Out of Sight (1996)

“Tyler arrived with the horses, February eighteenth, three days after the battlship Maine blew up in Havana harbor.”—Cuba Libre (1998)

“They sat at one of the sidewalk tables at Swingers, on the side of the coffee shop along Beverly Boulevard: Chili Palmer with the Cobb salad and iced tea, Tommy Athens the grilled pesto chicken and a bottle of Evian.”—Be Cool (1999)

“The church had become a tomb where forty-seven bodies turned to leather and stains had been lying on the concrete floor the past five years, though not lying where they had been shot with Kalashnikovs or hacked to death with machetes.”—Pagan Babies (2000)

“Dennis Lenahan the high diver would tell people that if you put a fifty-cent piece on the floor and looked down at it, that’s what the tank looked like from the top of that eighty-foot steel ladder.”—Tishomingo Blues (2002)

“Here was Antwan, living the life of a young coyote up in the Hollywood Hills, loving it, but careful to keep out of the way of humans.”—A Coyote’s in the House (2004)

“Late afternoon Chloe and Kelly were having cocktails at the Rattlesnake Club, the two seated on the far side of the dining room by themselves: Chloe talking, Kelly listening, Chloe trying to get Kelly to help entertain Anthony Paradiso, an eighty-four-year-old guy who was paying her five thousand a week to be his girlfriend.”—Mr. Paradise (2004)

“Carlos Webster was fifteen the day he witnessed the robbery and killing at Deering’s drugstore.”—The Hot Kid (2005)

“Honey phoned her sister-in-law Muriel, still living in Harlan County, Kentucky, to tell her she’d left Walter Schoen, calling him Valter, and was on her way to being Honey Deal again.”—Up In Honey’s Room (2007)

“They put Foley and the Cuban together in the backseat of the van and took them from the Palm Beach County jail on Gun Club to Glades Correctional, the old redbrick prison at the south end of Lake Okeechobee.”—Road Dogs (2009)

“Xavier watched two Legionnaires stroll out form the terminal to wait for the flight: dude soldiers in round white kepis straight on their heads, red epaulets on their shoulders, a wide blue sash around their waist, looking like they from some old-time regiment except for the short pants and assault rifles.”—Djibouti (2010)

“Raylan Givens was holding a federal warrant to serve on a man in the marijuana trade known as Angel Arenas, forty-seven, born in the U.S. but 100 percent of him Hispanic.”—Raylan (2011)

“A time would come, within a few years, when Ruben Vega would go to the church in Benson, kneel in the confessional, and say to the priest, ‘Bless me, Father, for I have sinned. It has been thirty-seven years since my last confession….Since then I have fornicated with many women, maybe eight hundred. No, not that many, considering my work. Maybe six hundred only.’”—”The Tonto Woman,” a short story that appeared in Roundup: An Anthology of Great Stories By The Western Writers of America (1982)

(In this case I think you need all of the above to truly capture Leonard’s touch. By the way, “The Tonto Woman” was made into a tasty short film that was nominated for an Oscar.)

“Joe Sereno caught the Odyssey night clerk as he was going off: prissy guy, had his lunch box under his arm.”—Naked Came the Manatee, a novel written serially by Dutch and 13 other mostly Florida-based writers including Carl Hiaasen, Dave Barry, James W. Hall and Paul Levine. (1996)

“They had dug coal together as young men and then lost touch over the years.”—Fire in the Hole, a short story published as an e-book (2001)

“A German prisoner of war at the camp called Deep Fork had taken his own life, hanged himself two nights ago in the compound’s washroom.”—Comfort to the Enemy, a serial published in the New York Times (2005)