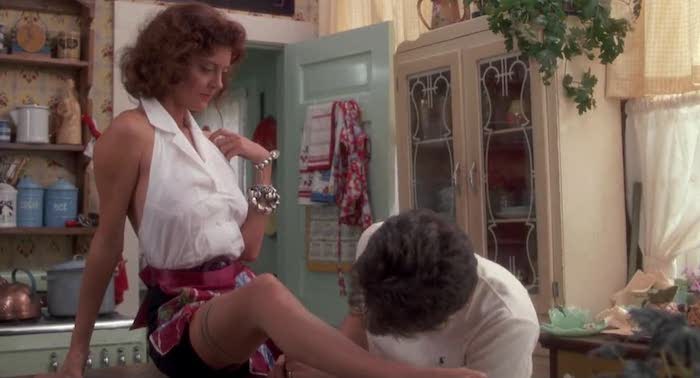 I met the first boy I ever had sex with at the roller rink. He was a speed skater and could rubber leg, which at the time made him more attractive than the nerdy science-fair boys who had to rent their skates and couldn’t even do the hokeypokey.

Our courtship lasted from the relay race to the couples’ skate, and when we finally consummated our yearnings at a friend’s apartment, I learned an important lesson: Athleticism doesn’t equal sexual adroitness. It was a lesson I would have to learn over and over again.

Just like Latins and rock musicians, jocks enjoy an unwarranted reputation for prowess in the sack. But boasting about getting laid and actually being any good are two very different things—if they weren’t, Wilt Chamberlain would have my home number. Still, women line up for jocks. Athletes do have the formidable advantage of being both taut as chicken wire and in uniform. Add the fact that, unlike Navy SEALs or other dressed-up, daring types, jocks perform their manly feats in public, and it’s no wonder cheerleaders and other prudes part their thighs for men of the brutish genus. Even the ever-constant Brooke Shields has let sweathog Andre Agassi slide between her and her Calvins.

And while the fey intellectual is enjoying a dubious rise in the sexual-commodities market, when push comes to push harder, Hugh Grant’s bewildered mumblings and catty one-liners can’t stand up to the mythic appeal of an evening spent with Charles Barkley. Or so goes the conventional wisdom.

Truth is, when you sleep with a jock, the odds of seeing stars and screaming Holy Jesus are about as good as those of a Charles-and-Di reunion. I know it’s tough to swallow, but Ted Koppel is probably a better lay than, say, Jose Canseco.

Take my night in the front seat of a Volkswagen with Joe, a quarterback for the University of Florida. Joe (his and other names have been changed) was blond, blue-eyed Baywatch material. He was also clumsy. There was some confusion as to what role the gearshift should play in our evening’s activities. He compared his and the exhaust pipe’s diameter—complete with revving noises—proving he possessed not only questionable manners but also, as I would shortly learn, a gift for hyperbole. Thankfully, he was quicker than a Montana summer, no doubt due to all those hours of sprint training.

I know it’s tough to swallow, but Ted Koppel is probably a better lay than, say, Jose Canseco.

When I related my experience to a girlfriend who shared a weakness for jocks, she said I was lucky he made the vroom noise only during foreplay. She’d once dated a baseball player who called himself the “Bed Buffalo” and delighted in draping his body with a towel, then snorting and rooting under the bedcovers. Which would have been okay, she said, except that’s all he did under the bedcovers.

Maybe jocks are just playful, I thought. But after Gearshift Joe, I received too many commiserating testimonials from other women to ignore the sad truth: The legend of the great sportsman stud is bunk—the result of a hugely successful propaganda campaign that rivals the Nixon-as-statesman rehab effort.

Still, I was skeptical. Surely not all athletes were lousy lovers. It took four years of college and numerous volunteers to make me a believer. And not just any college, but Indiana University, the Cream and Crimson, a school as synonymous with basketball as Sweden is with suicide. I lived in McNutt dormitory, the building closest to the training gym and Hoosier Stadium. Before the end of my first semester, I had met representatives of the Hoosier track, football and basketball teams. I started with Diego.

Diego was a soccer player. He was a sturdy boy, built like a fireplug and twice as smart. Diego enjoyed rock climbing—cramming his toes into crevices and hanging off 500-foot-high ledges by his fingertips until his whole body vibrated. Our courtship was long by college standards, replete with trembly phone calls and simultaneous laundering. One night, he showed me snapshots of a recent climbing expedition. Looking at photographs of him all roped up … well, let’s just say that by the time we finally made love on the floor of his dorm room, Sparky could have done the two-minute missionary thing and I would have been happy. He didn’t.

Instead, he critiqued. Apparently, Diego liked his love-making silent and individual, like rock climbing, only without the rope burns. “I hope this doesn’t happen every time,” he said, referring to my intrusive vocalizations. Don’t you worry, I thought, as I stood up and left as indignantly as anyone can with carpet lint in her hair.

After Diego came a series of unfortunate experiences with runners, weightlifters and soccer, baseball and tennis players, highlighted by one particularly pathetic night when Alec, a mountain-biker, kept holding his breath and trying to ram his skull back into the birth canal. At least, that’s what it felt like.

Steve meant well, which is probably the worst thing you can say about a man trying to flour your biscuit.

The solitary relief from this score-and-snore parade was Ernie, a golfer and a bit of a lush, which in college is still charming. On the fairway and in bed, Ernie was slow, precise and chubby, and actually seemed to enjoy himself. He knew just how deep to plant his tee and had solid follow-through to boot. Ernie was a very good golfer. I decided it was an omen and started hanging around the driving range. Before long, I met Steve, a former member of the Cornell golf team, and he sank my theory like a two-foot putt.

Steve meant well, which is probably the worst thing you can say about a man trying to flour your biscuit. He assumed he knew more anatomy than he did. I felt bad for Steve, but I stopped sleeping with him anyway.

It was about this time that I considered giving up jocks for good. l had asked around; still more women were enduring similar incidents. One friend, who had slept with much of the IU basketball team’s starting lineup (which in Indiana is the star-fucking equivalent of bagging the entire Baldwin brood), said that after a particularly vigorous session of love-making, our treasured celebrity forward had vomited all over her. The case against athletes was mounting.

Some nights, my dorm mates and l would sit around speculating on who would be the absolute worst lover in sporting history. It was like trying to pick the tackiest outfit at the Country Music Awards. I voted for one time Bears china doll Jim McMahon. Any man who sucked that much air and winced more than my grandmother at Thanksgiving dinner had to be lame. During these talks, some axioms emerged.

1. The more accomplished the jock, the worse the sex. Think of ego as coitus poison. Date an athlete, and you’re soaking in it. Date a pro, and you might as well call yourself Cleopatra and snuggle with the nearest asp.

2. Athletes who pursue highbrow or individual sports—polo players, climbers, marathoners—are no better at jiggling your gigi than the gung ho, bit-chomping team-sporters. They just grunt less.

3. Small things come in big packages. “Compensation” is an ugly word. It also happens to be the right one. (Basketball players are by and large excluded.)

4. Athletes are babies. Doyle, a well-rounded jock I loved dearly, once likened performing oral sex to retrieving olives from the bottom of a narrow jar using just your tongue. “It hurts my neck,” he whined, adding “I’d never ask you to do something that hurt.” Sad but true, I thought.

5. Athletes have misplaced priorities. Time spent humping is time not spent training, eating or sleeping. For them, sex is low on the list, somewhere between flossing and cleaning hair out of the shower drain. In fact, most athletes are warped enough to believe that improving their vertical is more important than boning up on their horizontal.

6. Athletes are distracted—by time, by training, by their reflection in your lava lamp. Many a night I’ve opened my eyes and observed my partner stealing glances at his rippled stomach, oblivious to any naked form but his own. Once I even made shadow puppets behind my lover’s back. Bobby the tennis pro didn’t notice until twenty minutes into the match. He was too busy perfecting his stroke.

7. Athletes are conservative. Let’s face it, jocks are conditioned creatures, beefy lab rats depressing the feed lever until they drown in kibble. They’re accustomed to simple, repetitive movements with a concrete goal in sight. I’ll tell you right now, that goal is not your screaming meemie. You can also throw away the nanny uniform and the rubber dress.

8. Every athlete thinks he’s the exception to axioms 1 through 7.

Turns out, slackers make great lovers, if for no other reason than that they’ve got nowhere else to be.

So I began experimenting with brooders. Men who wore greasy jeans and shirts of an indeterminate color. Men who smelled of fried cheese and clove cigarettes and carried a dog-eared copy of On the Road in their army-surplus backpack. Men your father would squint at suspiciously. Flaccid, feeble men who sat on sofas at parties, flicking ashes into their beer cans and making snide remarks under their breath. These were my new paramours. l was prepared for the worst.

Turns out, slackers make great lovers, if for no other reason than that they’ve got nowhere else to be. They aren’t rushing off to the gym or returning from the field, tired and depleted. One woman friend, a cycling-race director who finally broke her pattern of diddling mountain bikers, discovered that while a popcorn vendor may not look as hot in Lycra, he will ride the extra mile with energy to spare. Plus, he has snacks when you’re finished.

I also discovered that it’s possible to have intercourse without Monday Night Football in the background (although I did miss the cheers), that a xylophone stomach is a highly overrated feature, that being read to can be cute in small doses and that most effeminate heterosexual males have extremely nimble fingers.

As one girlfriend summed it up, “Athletes are so into themselves, they just don’t have time to be into someone else.” Yes, a confident bearing is appealing, but it’s camouflage. Jocks use it to make the kill, and they don’t have the time or need to refine technique. Believe me, a man’s battered ego, not a butt like a bowling ball, is a girl’s best friend. My friend Charlie, an arty, broad-minded, music-history type, doesn’t understand the jock mentality. He believes if you have a few hours to spare, better to spend them chasing girls than balls. Of course, Charlie gets laid only about as often as the Democrats are in the White House, while his sportsman buddies have to beat the babes off with a stick.

l would like to say that after college and graduate school and my first few professional jobs, I’d gained enough life experience to embrace the soft-shouldered set 100 percent and leave the jocks behind forever, but that would be a lie. Occasionally, I’ve fallen off the wagon and into the hay with a corn-fed country boy with more letters on his jacket than words in his vocabulary, only to be disappointed yet again. But, hey, you can’t fault a girl for trying. Besides, if hope can get Bill Clinton elected, it can certainly get me into bed.