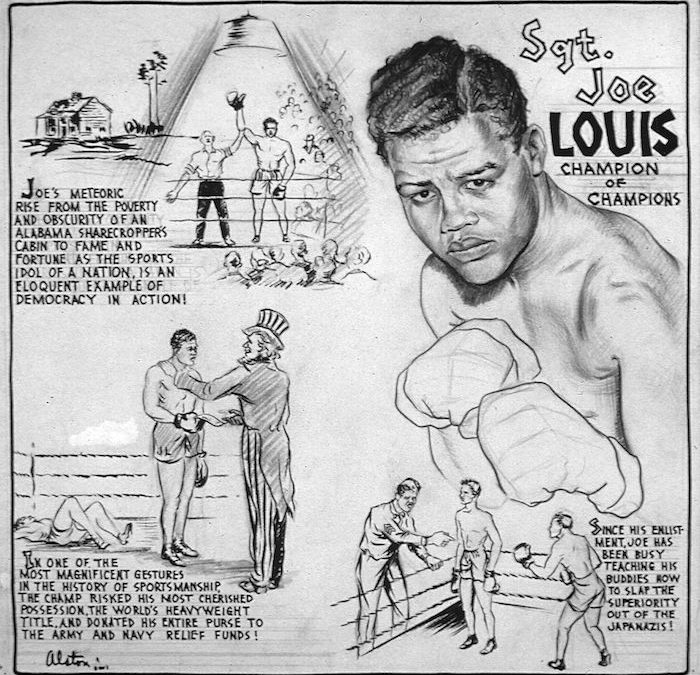 [This column is collected in American Pastimes: The Very Best of Red Smith]

Joe Louis lay on his stomach on a rubbing table with his right ear pillowed on a folded towel, his left hand in a bucket of ice on the floor. A handler massaged his left ear with ice. Joe still wore his old dressing-gown of blue and red—for the first time, one was aware of how the colors had faded—and a raincoat had been spread on top of that.

This was an hour before midnight of October 26, 1951. It was the evening of a day that dawned July 4, 1934, when Joe Louis became a professional fist fighter and knocked out Jack Kracken in Chicago for a fifty-dollar purse. The night was a long time on the way, but it had to come.

Ordinarily, small space is reserved here for sentimentality about professional fighters. For seventeen years, three months, and twenty-two days Louis fought for money. He collected millions. Now the punch that was launched seventeen years ago had landed. A young man, Rocky Marciano, had knocked the old man out. The story was ended. That was all except—

Well, except that this time he was lying down in his dressing-room in the catacombs of Madison Square Garden. Memory retains scores of pictures of Joe in his dressing room, always sitting up, relaxed, answering questions in his slow, thoughtful way. This time only, he was down.

His face was squashed against the padding of the rubbing table, mulling his words. Newspapermen had to kneel on the floor like supplicants in a tight little semicircle and bring their heads close to his lips to hear him. They heard him say that Marciano was a good puncher, that the best man had won, that he wouldn’t know until Monday whether this had been his last fight.

He said he never lost consciousness when Marciano knocked him through the ropes and Ruby Goldstein, the referee, stopped the fight. He said that if he’d fallen in mid-ring he might have got up inside ten seconds, but he doubted that he could have got back through the ropes in time.

They asked whether Marciano punched harder than Max Schmeling did fifteen years ago, on the only other night when Louis was stopped.

Joe’s eyes got sleepy. “Ugh,” he said, and bobbed his head.

“How did you feel?” Ray Arcel was asked. For years and years Arcel trained opponents for Joe and tried to help them whip him, and in a decade-and-a-half he dug tons of inert meat out of the resin.

The fight mob was filling the room. “How did you feel tonight?” Ezzard Charles was asked. Joe Louis was the hero of Charles’ boyhood. Ezzard never wanted to fight Joe, but finally he did and won. Then and thereafter Louis became just another opponent who sometimes disparaged Charles as a champion.

“No,” he said, with a kind of apologetic smile that explained this was just a prize fight in which one man knocked out an opponent.

“How did you feel?” Ray Arcel was asked. For years and years Arcel trained opponents for Joe and tried to help them whip him, and in a decade-and-a-half he dug tons of inert meat out of the resin.

It wasn’t necessary to ask how Marciano felt. He is young and strong and undefeated. He is rather clumsy and probably always will be, because he has had the finest of teachers, Charley Goldman, and Charley hasn’t been able to teach him skill. But he can punch. He can take a punch. It is difficult to see how he can be stopped this side of the heavyweight championship.

It is easy to say, and it will be said, that it wouldn’t have been like this with the Louis of ten years ago. It isn’t a surpassingly bright thing to say, though, because this isn’t ten years ago. The Joe Louis of October 26, 1951, couldn’t whip Rocky Marciano, and that’s the only Joe Louis there was in the Garden.

That one was going to lose on points in a dreary fight that would have left everything at loose ends. It would have been a clear victory for Marciano, but not conclusive. Joe might not have been convinced.

An old man’s dream ended. A young man’s vision of the future opened wide. Young men have visions, old men have dreams. But the place for old men to dream is beside the fire.