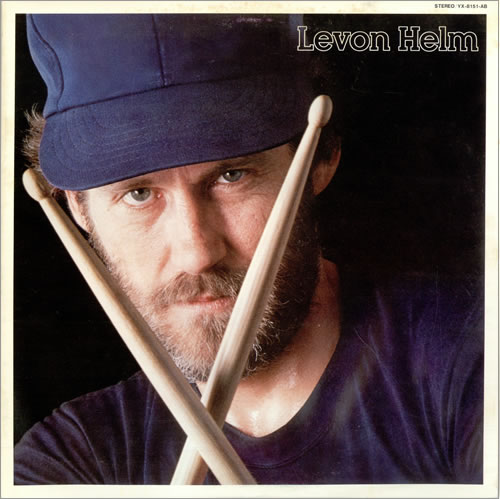 As soon as they heard Levon Helm was coming, the guys in the band began to imagine him sitting in with them, playing the drums, maybe even singing “The Weight.” It was one of the songs they did when they got together on Friday nights, finished with another week’s filming of a TV drama called Midnight Caller, just letting the music ease them out of the harness. There was music everywhere on that show, from the old MGM Studios in L.A., where we wrote it, to San Francisco, where we filmed it. You couldn’t go a day without someone turning you on to an album or talking up a concert. Or you’d walk into the executive producer’s office and find him practicing a new lick on his guitar, a pleasure that almost always seemed to come before business. But the executive producer knew he was a better singer than a guitarist—fitting, I suppose, since his name was Bob Singer. He sang lead for the band that came into being when four kindred spirits found each other on the sound stage, and the band bore his name, Bobby and the Bonemasters. All of which meant it was Singer who would have to ask Levon Helm if he was interested in hanging out with a bunch of rock and roll dreamers.

Of course Levon’s primary purpose on Midnight Caller had nothing to do with music or his history as the soul of the band known as the Band. He was guest starring as an ex-convict who wanted to go back to prison because it was the only place he knew how to exist. The script was my contribution to the proceedings. I had pictured Levon in the role from the day in 1990 that the idea hit me, not because he was a trained actor but because he was one of those naturals who seemed as real as calloused hands when he was on camera. He had been pluperfect as Loretta Lynn’s father in Coal Miner’s Daughter, and it was hard to forget his easy grace as he lit Robbie Robertson’s cigarette in The Last Waltz. What I didn’t find out until later was how much acting he’d had to do in that documentary about the Band’s final concert at full strength. He was brimming with anger because he thought Robertson was sacrificing everything they had accomplished for his own selfish purposes.

But acting ability ceased to matter as Singer tried to work up his courage to approach Levon on the Bonemasters’ behalf. It was Levon’s earthy, soulful voice that haunted Singer now—the juke-joint joy of “Rag Mama Rag,” the grief and defiance of “The Night They Drove Old Dixie Down.” Levon had plunged into the musical fires of the sixties with Dylan and emerged playing the most quintessentially American rock ever with the Band. But he was its only American, a cotton farmer’s son from Marvell, Arkansas, surrounded by four Canadians. He drummed, took an occasional turn on the mandolin, and like the Band’s other two singers—Rick Danko and Richard Manuel—made memories with his voice. He had been on stage at Woodstock and the Isle of Wight and on the cover of Time magazine, and now Singer was going to invite him to the Bonemasters’ lair in the lunchroom of the converted San Francisco printing plant where Midnight Caller had its sound stages. Somehow that didn’t compute.

Levon walked into the room as if he understood that a heavy step might destroy the equilibrium.

To calm himself, Singer concentrated on remembering how gracious Levon had been when they’d met in L.A., a true Southern gentleman with a bushy beard that made him look older than the fifty years he was then approaching. Singer figured that if he got shot down, it would at least be painless. So he took a deep breath, explained about the Bonemasters and offered his invitation.

That was, in its way, a historic moment. Other musicians had guest starred on the show, but only Levon said yes to the Bonemasters. When Billy Vera, a rhythm and blues stalwart from L.A., turned them down, it was with a contempt that suggested he would rather eat roadkill. Hoyt Axton, the country singer whose mother wrote “Heartbreak Hotel,” never got invited because he was too busy living the life that enabled him to open concerts by saying, “Hi, I’m what’s left of Hoyt Axton.” But Roger Daltrey would have been welcomed if the part he played hadn’t cranked up his anxiety level by requiring him to sing a non-Who song. Still, he gave the cast and crew something to remember by loosening his vocal chords with a kick-ass version of “Hey Joe.”

Some of the Bonemasters started thinking their night with Levon Helm would be solid gold when filming wrapped at eight that Friday, a good three hours earlier than usual. Singer, however, wasn’t one of them. He was worried that Levon would get a load of the lunchroom, with its linoleum floor and pea green walls, and decide it was too small-time for him. Or maybe he’d get chased off if Jim Behnke, Midnight Caller’s unit production manager, went on one of his guitar solos that got lost in space. Or maybe Singer himself would do the chasing if nerves cracked his tobacco-cured baritone.

Levon walked into the room as if he understood that a heavy step might destroy the equilibrium. The Bonemasters were already playing, so he grabbed a beer and one of Singer’s harps, then plugged into an amplifier and settled in a corner. Everything was fine until he started to play along with the band. “I’m not getting any sound,” he said. “The amp’s not working.”

Great, Singer thought. He’s been here ten minutes and we’ve already proven what rank amateurs we are. He’s going to take off.

But Levon didn’t so much as blink even when he discovered there wasn’t another amp. He just played the guitar Singer wasn’t using, and when it came time to blow harp, he did it into the microphone. It didn’t sound as good as it would have through an amp, but the important thing, the absolutely crucial thing, was that he stayed.

This was Levon’s life in microcosm, a life filled with nights like the one they were living with him, nights that go beyond getting rich, famous, high, or laid and exist for the undiluted joy of making music.

At first the Bonemasters looked to Levon for requests—they were up for anything—but he told them, “You go on and play what you want to play.” So they dove into a repertoire that included songs by the Beatles, the Stones, the Allman Brothers, and Lynyrd Skynyrd. As usual they were at their tightest when they did “Honky Tonk Woman.” “Boys,” Levon said, “I’d keep that one in the set.”

The next thing the Bonemasters knew, he was teaching them some country songs, the kind he’d been listening to since he was six years old and saw Bill Monroe and the Blue Grass Boys at a tent show in Marvell. And when they got back to rock and roll, Gary Cole—the Bonemasters’ drummer, the star of Midnight Caller, and the future Mr. Brady in the Brady Bunch movies—asked Levon if he would like to take a turn on the drums. Levon couldn’t resist. He sounded just the way he did on all those albums with the Band, the tasteful fills, the clever way he got behind the beat, everything so tight, so perfect. Cole and Singer stood off to the side and hoped they weren’t gawking.

They were seeing more than a great drummer at work, though. This was Levon’s life in microcosm, a life filled with nights like the one they were living with him, nights that go beyond getting rich, famous, high, or laid and exist for the undiluted joy of making music. You could trace them back beyond the Band and Dylan to Levon’s stops with Ronnie Hawkins’ Hawks and the Jungle Bush Beaters, all the way to those stolen hours as a kid listening to Jimmy Reed and Muddy Waters on the radio and imagining himself in their world. And if you follow his trail forward from his session with the Bonemasters, you will find more of the same, as a solo act, with the RCO All-Stars and the reconstituted Band, right up to the midnight rambles he hosted in Woodstock until throat cancer sent him off on his last ramble.

After a life so full musically, it is hard to imagine that Levon remembered sitting in with the Bonemasters, but there are pictures to prove he did. One of Midnight Caller’s prop masters came down to the lunchroom and snapped a bunch of them—Levon surrounded by Singer, Cole, Behnke, and Kenny Collins, the assistant director who played such solid bass. When the guys in the band checked out the pictures later, there was no denying that Levon looked like he was enjoying himself. But there shouldn’t have been any doubt as soon as he said his friend Clarence Clemons was in San Francisco and offered to invite him over to play some saxophone, the way he did for Bruce Springsteen. It didn’t happen, though, because one of the guys had kids at home and a babysitter going off duty at midnight, and that’s the way the real world goes around.

So the Bonemasters reveled in what they got with Levon, which was more than they ever expected and remains the first topic of conversation on those rare occasions when they run into each other more than twenty years later. In fact, the only thing Levon wouldn’t do that night was sing one of the Band’s songs, not that Behnke didn’t try to tempt him by playing the intro to “The Weight” at every opportunity. “The Weight” was a Bonemasters staple and it begged to be sung, but Singer, who usually did the honors, felt sheepish about it. After all, the man who put the song over the top for the Band was there with them. Finally, Levon said, “You sing it, Bob.”

There was no backing out—the load was right on Singer. He tucked into “The Weight” with no goal beyond getting to the end of it. It’s a surreal parable about a good deed that consumes its doer, and it’s filled with the kind of characters more often found in Flannery O’Connor’s novels than a rock and roll song. By the time he finished with Crazy Chester, Jack the Dog, and all the rest of them, Singer wasn’t sure if he should take a bow or run for the hills. Then he looked over and saw Levon grinning and flashing him a thumbs-up. A fellow could live a long time and not have a finer moment.