The Called Shot Heard Round the World 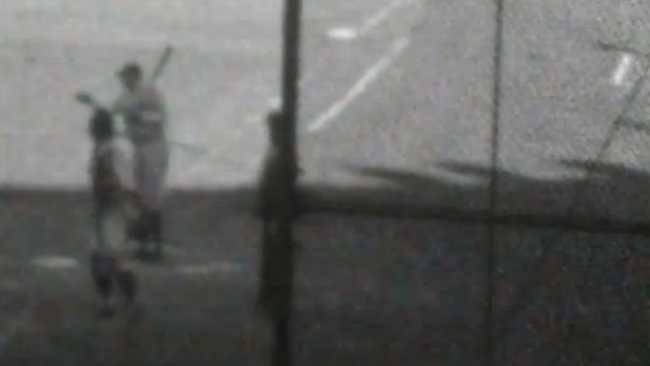 There, in the third ball game of the World Series, at the Cubs’ ball yard on the north side yesterday, the people who had the luck to be present saw the supreme performance of the greatest artist the profession of sport has ever produced. Babe Ruth hit two home runs.

Now, Lou Gehrig also hit two home runs, and Jimmy Foxx of the Athletics or any other master mechanic of the business might have hit three or four home runs and you would have gone away with the same impression that a factory tourist receives from an hour of watching a big machine lick labels and stick them on bottles of mouthwash or pop. The machine might awe you, but would you love it?

The people who saw Babe Ruth play that ball game and hit those two home runs against the Cubs came away from the baseball plant with a spiritual memento of the most gorgeous display of humor, athletic art and championship class any performer in any of the games has ever presented.

The Babe is 38 years old, and if you don’t know that he is unable to hike as far for fly balls or stoop as nimbly as he used to for rollers coming to him through the grass, that must be just your own fault, because he would not deceive you. As an outfielder he is pretty close to his past tense, which may mean that one more year from now he will be only a pinch-hitter. He has been breaking this news all year to himself and the customers.

Why, when Bill Jurges, the human clay pigeon, hit a short fly to him there in left field and he mauled it about, trying for a shoestring catch, he came up off the turf admitting all as Jurges pulled up at second.

The old Babe stood up, straightened his cap and gesticulated vigorously toward Earle Combs in center. “Hey!” the old Babe waved, “my dogs ain’t what they used to be. Don’t hit them out to me. Hit to the young guy out there.”

I am telling you that before the ball game began the Babe knew he was going to hit one or more home runs.

The customers behind him in the bleachers were booing him when the ball game began, but they would have voted him president when it was over, and he might not be a half-bad compromise, at that. Somebody in the crowd tossed out a lemon which hit him on the leg. Now there are sensitive ball players who might have been petulant at that and some stiff-necked ones who could only ignore it, boiling inwardly. But the Babe topped the jest. With graphic gestures, old Mr. Ruth called on them for fair play. If they must hit him with missiles, would they please not hit him on the legs? The legs weren’t too good anyway. Would they just as lief hit him on the head? The head was solid and could stand it.

I am telling you that before the ball game began the Babe knew he was going to hit one or more home runs. He had smacked half a dozen balls into the right-field bleachers during his hitting practice and he knew he had the feel of the trick for the day. When his hitting practice was over he waddled over toward the Cubs’ dugout, his large abdomen jiggling in spite of his rubber corsets, and yelled at the Cubs sulking down there in the den, “Hey, muggs! You muggs are not going to see the Yankee Stadium any more this year. This World Series is going to be over Sunday afternoon. Four straight.”

He turned, rippling with the fun of it and, addressing the Chicago customers behind third base, yelled, “Did you hear what I told them over there? I told them they ain’t going back to New York. We lick ‘em here, today and tomorrow.”

There never was such contempt shown by one antagonist for another as the Babe displayed for the Cubs, and ridicule was his medium.

The Babe had been humiliating the Cubs publicly throughout the series. They were a lot of Lord Jims to him. They had had a chance to be big fellows when they did the voting on the division of the World Series pool. But for a few dollars’ gain they had completely ignored Rogers Hornsby, their manager for most of the year, who is through with baseball now apparently without much to show for his long career, and had held Mark Koenig, their part-time shortstop, to a half share. The Yankees, on the contrary, had been generous, even to ex-Yankees who were traded away months ago, to their deformed bat boy who was run over and hurt by a car early in the season, and to his substitute.

There never was such contempt shown by one antagonist for another as the Babe displayed for the Cubs, and ridicule was his medium.

In the first inning, with Earle Combs and Joe Sewell on base, he sailed his first home run into the bleachers. He hit Charlie Root’s earnest pitching with the same easy, playful swing that he had been using a few minutes before against the soft, casual service of a guinea-pig pitcher. The ball would have fallen into the street beyond the bleachers under ordinary conditions, but dropped among the patrons in the temporary seats.

The old Babe came around third base and past the Cubs’ dugout yelling comments which were unintelligible to the patrons but plainly discourteous and, pursing his lips, blew them a salute known as the Bronx cheer.

He missed a second home run in the third inning when the ball came down a few feet short of the wire screen, but the masterpiece was only deferred. He hit it in the fifth, a ball that sailed incredibly to the extreme depth of center field and dropped like a perfect mashie shot behind the barrier, long enough to clear it, but with no waste of distance.

Guy Bush, the Cubs’ pitcher, was up on the top step of the dugout, jawing back at him as he took his turn at bat this time. Bush pushed back his big ears, funneled his hands to his mouth, and yelled raspingly at the great man to upset him. The Babe laughed derisively and gestured at him. “Wait, mugg, I’m going to hit one out of the yard.” Root threw a strike past him and he held up a finger to Bush, whose ears flapped excitedly as he renewed his insults. Another strike passed him and Bush crawled almost out of the hole to extend his remarks.

He licked the Chicago ball club, but he left the people laughing when he said goodbye, and it was a privilege to be present because it is not likely that the scene will ever be repeated in all its elements.

The Babe held up two fingers this time. Root wasted two balls and the Babe put up two fingers on his other hand. Then, with a warning gesture of his hand to Bush, he sent him the signal for the customers to see.

“Now,” it said, “this is the one. Look!” And that one went riding in the longest home run ever hit in the park.

He licked the Chicago ball club, but he left the people laughing when he said goodbye, and it was a privilege to be present because it is not likely that the scene will ever be repeated in all its elements. Many a hitter may make two home runs, or possibly three in World Series play in years to come, but not the way Babe Ruth made these two. Nor will you ever see an artist call his shot before hitting one of the longest drives ever made on the grounds, in a World Series game, laughing and mocking the enemy with two strikes gone.

Collected in From Black Sox to Three-Peats: A Century of Chicago’s Best Sportswriting.