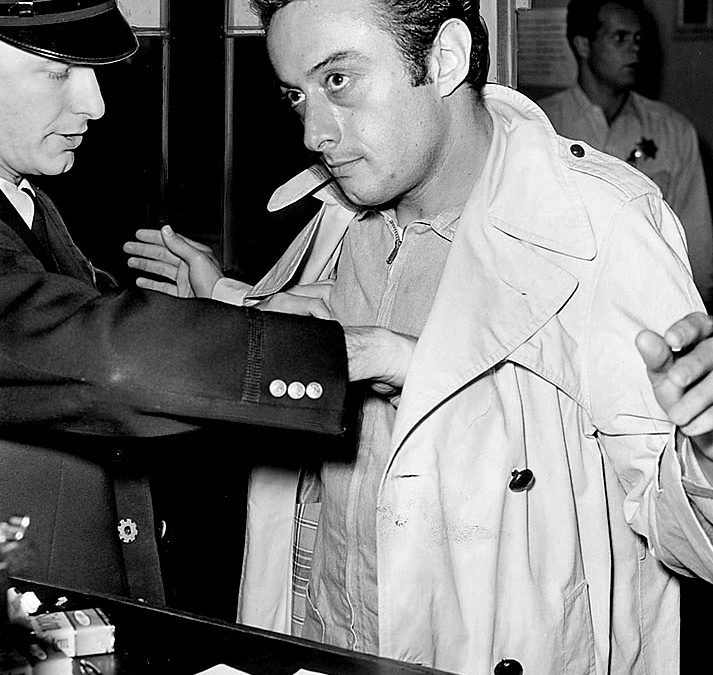 Lenny Bruce fell off a toilet seat with a needle in his arm and he crashed to a tiled floor and died. And the police came and harassed him in death as in life. Two at a time, they let photographers from newspapers, magazines and TV stations step up and take pictures of Lenny Bruce lying dead on the tiled floor. It was a terrible thing for the cops to do. Lenny hated to pose for pictures.

Lenny was a very sick comedian when he died. He had grown to more than 200 pounds, with an enormous belly, fattened by candy bars and Cokes, and his mind was fat, too, with visions of writs and reversals and certificates of reasonable doubt. But he wasn’t a junkie. He just wanted, on August 3, 1966, a taste of stuff. It was his last supper.

He was funny, frighteningly funny, with the kind of humor that could create instant laughter and instant thought, that could cut to the core of every hypocrisy. He was a wit and he was a philosopher.

C’mon, Lenny, said the television producer, be a man. Sell out.

The idea of a memorial service for Lenny Bruce would have, at best, appalled him. His friends knew this, but they held the memorial anyway.

He never sold out, not even to his friends: He thought that the petition circulated in his support, signed by Reinhold Niebuhr and Elizabeth Taylor and almost everyone in between—Lenny could have done something with that image—was ridiculous. He wanted nothing to do with it. He didn’t want to be a cause, a symbol of free speech. He had heard the clanging of too many false symbols. He simply believed he had the right to talk in night clubs the way corporation vice-presidents talk in their living rooms and their board rooms.

The idea of a memorial service for Lenny Bruce would have, at best, appalled him. His friends knew this, but they held the memorial anyway; it was held, as memorials are, for the benefit of the living. It was held for people who suspected they were alone until, maybe six, seven years ago, before Mississippi marches and draft-card barbecues, Lenny bound them all together.

Paul Krassner, who still wants to grow up to be Lenny Bruce, despite the implied life expectancy, conducted the memorial, and Lenny’s kind of people—kikes, spades, fags and other fortunates, perhaps 1000 strong—jammed New York’s Judson Memorial Church. One young man wore a blue sweat shirt with a single word emblazoned on it: Grass. There were babies in arms, and a girl on crutches, and even a few people who actually knew Lenny.

Allen Ginsberg and the poet’s companion, Peter Orlovsky, sang a Hindu funeral chant, a fitting hymn to a Jew in a Protestant church. And then a young man wearing bright-green pants and waving a tall American flag leaped to the stage, sort of a beat Billy Graham. None of the organizers of the memorial had arranged his appearance; Lenny must have sent him. His name was Nathan John Ross, a proper flag-waving name, and he had wild sideburns with eyes to match. “You will pay the dues,” intoned Nathan John Ross. “God will not be mocked.” Of course He will. God, obviously, has a sense of humor, sometimes even a slightly sick sense of humor.

Allan Garfield, an actor and poet, followed the flag act, and he told how he once sought to use Lenny’s act as an aphrodisiac. His strategy worked, partly. The only slip was that the date he brought to the night club left with Lenny.

“How come you don’t make it with anybody?”

“You can tell me. I like to hear other people’s problems.”

The Fugs came on. They are a rock-’n’-roll group named after Norman Mailer’s most famous typographical euphemism, and the words to their songs were, for the most part, unintelligible. Their patter, unhappily, was not. They made jokes about pocket pool and sniffing armpits, the kind of jokes Lenny always found obscenely obvious.

The final speaker, talked about three of Lenny Bruce’s most notable characteristics: “his destructiveness, his unbearable moralism and his unstinting pigheadedness.”

Ginsberg read one of his poems, urging his disciples to “be kind to the universe of self,” and Nathan John Ross tried to top him with an impromptu cry, “I will be done and was done,” which, offhand, sounded logical enough.

Then Krassner quoted a song by Lenny that ended something like, “The hole in the ground is the end,” which triggered Nathan John Ross once more. “If I thought the hole was the last stop,” said good old reliable Nathan, “I wouldn’t get up in the morning.”

“May your alarm clock never ring again,” suggested Tony Scott, the jazz clarinetist. Scott’s quartet played hot blues, setting off thunderous applause and a few “Bravos!” courtesy of the male dancers in the congregation. Krassner thanked the jazzmen, called them “The Holy Trinity,” then remembered himself and mumbled, “Nothing personal,” to Nathan John Ross.

The Reverend Howard Moody, minister of the Judson Memorial Church, the final speaker, talked about three of Lenny Bruce’s most notable characteristics: “his destructiveness, his unbearable moralism and his unstinting pigheadedness.”

Lenny Bruce, said the minister, “exorcised the demons that plagued the body of the sick society … He led a crusade in semantics … May God forgive all those who acquiesced in the deprivation of his livelihood.”

“To the Jew first, then the Greek, then the gentile,” yelled Nathan John Ross to the departing mourners. None of the gentiles in the congregation seemed offended by the low billing.

One last four-letter word for Lenny: