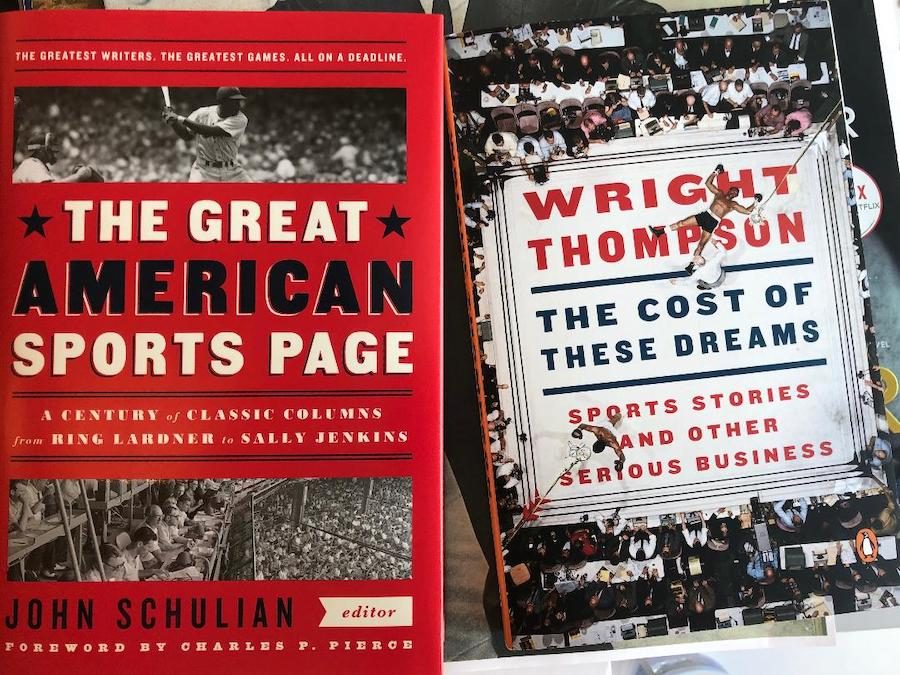 A couple of our pals have new stellar new book anthologies out and both are well worth your time. From the intrepid Wright Thompson, ESPN’s maestro of longform, comes his first anthology, The Cost Of These Dreams: Sports Stories and Other Serious Business, a worthy addition to any home library. From his introduction, here’s Wright:

I remember the first time I read Gary Smith’s letter from the Pine Ridge Reservation, a parable about the power and limits of sports to provide an escape; and when I discovered Frank Deford’s profile of Bobby Knight, which was true when it ran and got truer with the passing years; and what I understood about the importance of cutting through myths to find something real when I read Charles P. Pierce’s story on Tiger Woods. I learned about ambition, including my own, when I read Richard Ben Cramer’s masterpiece on Ted Williams, and in Gay Talese’s profile of Joe DiMaggio I found a reflection on the fleeting nature of fame and greatness—what relief it brings those who burned themselves chasing it, and what pain it can’t begin to touch. Those of us who write these kinds of sports stories, which feels like an ever-shrinking pool, are not after the symphony of a novel, or the jazz improv of a poem, but the hard, rough gut-punch of a blues riff.

If this book has an organizing principle, then it is this: The literary magazine sports story is a minor but vital form of uniquely American art. I get angry when people don’t learn the canon or hold the line on matters of ethics, ambition, and work. That’s what I owe those who came before and what I owe the version of myself who wanted so badly to be good at this. I never want to shortchange them, or me, or the form.

And in this corner, we have The Great American Sports Page: A Century of Classic Columns from Ring Lardner to Sally Jenkins, edited by our man John Schulian. Over at the Daily Beast, Schuliano talks about the third anthology he’s edited for the Library of America:

John Schulian: At most American newspapers for most of the 20th century, the sports columnist was the rock on which the sports page was built. You didn’t even have to read what he–until the ’80s it was always a he–wrote to understand his prominence. His byline was in larger type than anyone else’s, and no other sports writers had their pictures next to their bylines or their deathless prose set two columns wide and stripped down the side of the page. The sports columnist might even carry the title of sports editor, but that was almost always an honorific. If he had any sense, he didn’t want anything to do with making a million decisions a day, hiring or firing, doling out assignments, dealing with management or, worst of all, listening to writers bitch. Those were chores for the brave soul who was most often called the executive sports editor, and as far as the sports columnist was concerned, he was welcome to them.

The sports columnist had a better time by far, no matter what era he worked in. He got the choice assignments, always seemed to be traveling somewhere, wrote about what he wanted to, had a forum for spouting his opinions, set his own hours, didn’t always have to buy his own drinks, might even be a bit of a celebrity, and, if he really cared about the words that appeared under his byline, enjoyed the kind of stylistic freedom rarely given writers in any other department of the newspaper. Whether you were in New York or the most rabid college town on the planet (hello, Tuscaloosa), at large papers and small, he was the voice of the sports page whether you agreed with him or not. There was no sports talk radio, no ESPN, no blogs or podcasts, or any of the other things that now set the agenda for sports fans. If you wanted to chew on a trade or a firing or the home team’s chances in the big game Saturday, you turned to the sports columnist to see what he thought.

Be sure and check out James Parker’s smart write-up of The Great American Sports Page over at The Atlantic.