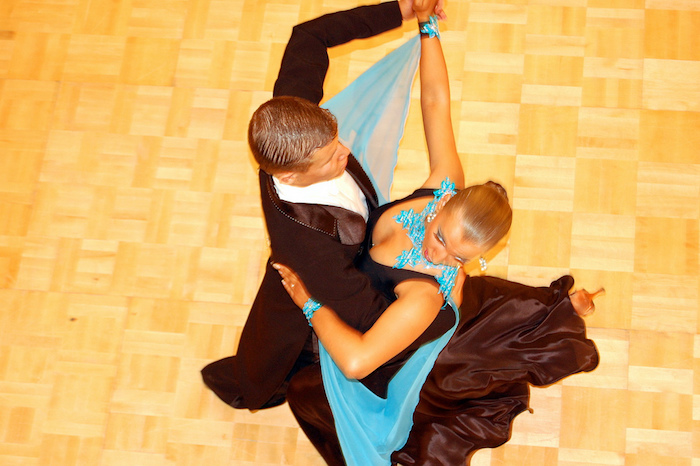 My only recommendation to a man who is even remotely thinking about ballroom dancing is to be careful. Unless you have a very large trust fund or a very strong character, don’t begin at Arthur Murray. Once they hook you, they have you for life.

I know. The only reason you’d take ballroom dancing at all would be as a joke. So that’s why I’m telling you: Don’t. Like a newborn duck, you’ll get imprinted on your teacher and your classmates, and then they’ll sign you up for lifetime lessons. Later, when you ask around, you’ll discover that you could get the same lessons for less from someone who used to teach at Arthur Murray and now gives lessons himself.

Once you feel what it’s like to dance with someone who knows how to dance, you’ll understand what I’m talking about. You may even come to realize, as I have, that dancing is better than sex. I mean that, I really do. It’s better because it’s a flirtation that can go on forever and ever without being consummated; because you can do it with strangers and not feel guilty or ashamed; because you can do it outside your marriage and not get in any trouble; and because you can do it in public, with people watching and applauding. And when you’re doing it right, you can’t think about anything else, such as what you forgot at work or that the ceiling needs painting.

Which is why women love to dance.

Once you feel what it’s like to dance with someone who knows how to dance, you’ll understand what I’m talking about. You may even come to realize, as I have, that dancing is better than sex.

There’s a problem, of course. All wonderful things in life come with some sort of problem. For women, it’s finding men to dance with. I’ve been taking ballroom dance lessons for more than a year now and, in my class, as in most classes, the women seriously outnumber the men. Not taking dance lessons is a common mistake among men. They fail to realize that dancing is one of the few things a man can learn when he’s young that will come in handy later. Men who know how to dance—even a few basic steps—will never end up sad and alone, with nobody to play with, because women will always be looking for that rare man who can dance. They’ll take him to night clubs and parties and on cruises, and they’ll go all mushy after a simple waltz.

Men should know this, but they don’t. They don’t appreciate the fact that what happens between a man and a woman on a dance floor is so romantic and pure, so steeped in tender tradition that few women can resist it.

There are other wonderful things about dancing. It’s a return to a more innocent time, back to the days of courtship when young couples danced the fox trot, the waltz and even the tango, and then fell in love with the way they felt in each other’s arms, moving to the music. After they fell in love, they got married. And then they stayed married.

On a dance floor, it’s OK for men to take the initiative and not worry about being viewed as Neanderthals. The man is supposed to ask the woman to dance.

Men who know how to dance—even a few basic steps—will never end up sad and alone, with nobody to play with, because women will always be looking for that rare man who can dance.

And once you begin to dance, the man leads. It doesn’t work well if you both lead, and it’s no better if you take turns. The man gets to show off his physical strength, lifting her up and twirling her around. It’s a scientific fact that once a woman feels a man’s strong arms around her, she feels a lot better about life in general and can’t complain much at all.

Women don’t complain about the fact that most of them dance better than men. If a man can’t cut it on the floor, the next time he asks, “Do you want to dance?” he may get a reply such as, “I think you need more practice. Why don’t we meet somewhere and try?” Women are perfectly willing to help someone learn. They’ll even become the dance partner of a man they might not otherwise entertain in any way other than as a grave doubt.

Any man who so much as wants to learn to dance is given much more slack by the women in ballroom dancing than the women are by the men, once the man has learned to dance and is totally impatient with the least imperfection. I know this marvelous dancer named Frank, who, the minute we start to tango (we take Tango Argentino class together, the dance of the truly driven), begins looking at me in the mirror and saying, “Can’t you do your ochos on your own balance?”

Frank, in fact, had a perfectly gorgeous partner named Irena, with long red hair down to her waist and a back like a Victorian virgin, her profile so pale and sweet against his dark, Latin good looks. But Frank was such a barrel of critiques that finally, one day, she just upped and quit, saying, “I can’t dance with you anymore. It’s no fun.”

As for me, one day I asked Frank, “Don’t you like dancing with me?”

So I left him alone from then on, even in a class where people were expected to dance with anyone handy. I ignored him for a long time. Now he asks me to dance, nicely, and things are a lot better.

Since I began doing ballroom dancing, I’ve discovered that there are two types of men to dance with. There’s the kind who, like me, learned everything they know from teachers and who wouldn’t veer off the beaten track if an earthquake struck in mid-step and with whom dancing is incredibly beautiful and brings moments of such happiness that they know they’ll remember them until the day they die. And then there are the men who were born to dance, who took a few lessons when they were young and have been dancing ever since. These men regard dance as a simple way to express themselves, leading their partners into things they never dreamed of doing in a million years, and making me, at least, feel as though I’ve just been to a motel—or a small hotel in Santa Barbara—for the best weekend of my life.

“My God,” I asked one partner, named Aldo, at the end of a slow Latin bolero. “What do you call that?”

No wonder he has been married five times. I would have married him, if only for a few infatuated months of ballrooms, moonlight and what he does to music.

Fred Astaire was like that, I suppose. He learned a few steps in his youth and just took off when he felt like it in later life. Oh, to be in Fred Astaire’s arms. Or even Ralph’s arms.

I had a first date with Ralph last Saturday. We were having dinner in one of those elegant old downtown-L.A. hotels that have a great restaurant, and after dinner, we walked past this hotel bar, where a combo was playing “But Not for Me.”

“I think so,” I said, wondering how a man who was only 34 and had been raised in Southern California would know.

“You want to try?” he said, smiling, and cherry bombs went off in my heart.

Maybe it’s the public formality of it all that makes the whole thing so private yet so intense. It took all my wits to keep from offering to be his slave for life.

The floor was almost empty, maybe two other couples, and we stood for a moment while he listened for the slow/quick-quick beat, which is all a fox trot is. And there we were, gliding away, my heart turning into cotton candy and my head in and out of the clouds. I stood up straight, my feet stayed on the floor and in that moment, I was prepared to forgive him for anything he would do for the next 40 years.

The dance came to an end and he said, “That was fun.”

I was seeing stars so badly I could hardly talk, but when he said “One more?” I managed a feeble “Oh, I’d love to.”

Maybe it’s the public formality of it all that makes the whole thing so private yet so intense. It took all my wits to keep from offering to be his slave for life.

“Ahhh,” he said, “you’re the queen of slow dances, aren’t you? You’re so easy to dance with, your body is the great escape.”

“Now, now,” I said, blushing like a love-struck kid. But I wasn’t a teenager in love, I was something worse—I was a tango dancer in love.

If a year ago someone had asked me to dance a dance in a place like that, he’d have been sorry. I was worse than a heavy lead, I led myself. But now my body was fully clothed while my mind, heart and soul were quite a different story.

Was he planning our future?

When I get infatuated this completely, I tend to think of headstones—what we’ll have written on them and if he’d like the side-by-side look or prefer nice mausoleum plaques. A year ago, I might have asked his view, but now, due to the rigorously enforced charm that I acquired in tangoland, I’m as good at keeping my mouth shut as I am at keeping my back straight for the entire dance. If Ralph wants headstones, I’m sure he’ll ask. I now leave it to the man to propose.

Of course, it’s only a dance.

But the great thing about ballroom dancing is where it can lead, if only a woman knows how to follow.