“Will You Be The Best There Ever Was?” Asked The Naked Woman With A Gun 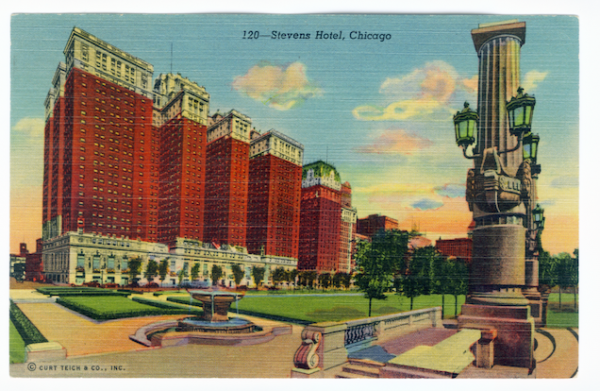 Roy trailed the anonymous crowd out of Northwest Station and clung to the shadowy part of the wall till he had the courage to call a cab.

“Do you go to the Stevens Hotel?” he asked, and the driver without a word shot off before he could rightly be seated, passed a red light and scuttled a cripple across the deserted street. They drove for miles in a shadow-infested, street-lamped jungle.

He had once seen some stereopticon pictures of Chicago and it was a boxed-up ant heap of stone and crumbling wood buildings in a many-miled spreading checkerboard of streets without much open space to speak of except the railroads, stockyards, and the shore of a windy lake. In the Loop, the offices went up high and the streets were jampacked with people, and he wondered how so many of them could live together in any one place. Suppose there was a fi re or something and they all ran out of their houses to see—how could they help but trample all over themselves? And Sam had warned him against strangers, because there were so many bums, sharpers, and gangsters around, people you were dirt to, who didn’t know you and didn’t want to, and for a dime they would slit your throat and leave you dying in the streets.

“Why did I come here?” he muttered and felt sick for home.

The cab swung into Michigan Avenue, which gave a view of the lake and a white-lit building spring into the sky, then before he knew it he was standing flatfooted (Christ, the size of it) in front of the hotel, an enormous four-sectioned fortress. He hadn’t the nerve to go through the whirling doors but had to because this bellhop grabbed his things—he wrested the bassoon case loose—and led him across the thick-carpeted lobby to a desk where he signed a card and had to count out five of the wallet’s pulpy dollars for a room he would give up as soon as he found a house to board in.

But his cubbyhole on the seventeenth floor was neat and private, so after he had stored everything in the closet he lost his nervousness. Unlatching the window brought in the lake breeze. He stared down at the lit sprawl of Chicago, standing higher than he ever had in his life except for a night or two on a mountain. Gazing down upon the city, he felt as if bolts in his knees, wrists, and neck had loosened and he had spread up in height. Here, so high in the world, with the earth laid out in small squares so far below, he knew he would go in tomorrow and wow them with his fast one, and they would know him for the splendid pitcher he was.

“Come down to my room,” she giggled, “and let me say welcome to the city.”

The telephone rang. He was at first scared to answer it. In a strange place, so far from everybody he knew, it couldn’t possibly be for him.

It rang again. He picked up the phone and listened.

“Hello, Roy? This is Harriet.”

He wasn’t sure he had got it right. “Excuse me?”

“Oh, Harriet.” He had completely forgotten her.

“Come down to my room,” she giggled, “and let me say welcome to the city.”

“Right away.” She gave him the room number.

“Sure.” He meant to ask her how she knew he was here but she had hung up.

Then he was elated. So that’s how they did it in the city. He combed his hair and got out his bassoon case. In the elevator a drunk tried to take it away from him but Roy was too strong for him.

He walked—it seemed ages because he was impatient—through a long corridor till he found her number and knocked.

Opening the door, he was astonished at the enormous room. Through the white-curtained window the sight of the endless dark lake sent a shiver down his spine.

Then he saw her standing shyly in the far corner of the room, naked under the gossamer thing she wore, held up on her risen nipples and the puffed wedge of hair beneath her white belly. A great weight went off his mind.

As he shut the door she reached into the hat box which lay open next to a vase of white roses on the table and fitted the black feathered hat on her head. A thick veil fell to her breasts. In her hand she held a squat, shining pistol.

He was greatly confused and thought she was kidding but a grating lump formed in his throat and his blood shed ice. He cried out in a gruff voice, “What’s wrong here?”

She said sweetly, “Roy, will you be the best there ever was in the game?”

She pulled the trigger (thrum of bull fiddle). The bullet cut a silver line across the water. He sought with his bare hands to catch it, but it eluded him and, to his horror, bounced into his gut. A twisted dagger of smoke drifted up from the gun barrel. Fallen on one knee he groped for the bullet, sickened as it moved, and fell over as the forest flew upward, and she, making muted noises of triumph and despair, danced on her toes around the stricken hero.