Just Another “Fight of the Century” 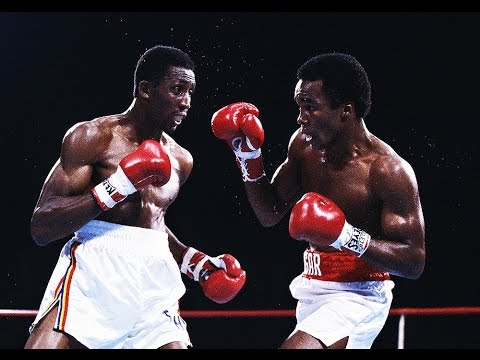 It seems the designation of “Fight of the Century” (this has been the third in the last two years) is a masked monicker to disguise the fact they are affairs of violence. Perhaps things will improve when we move on to “The Mayhem of the Millennium.”

Before Leonard and Hearns put on their magnificent brawl, one had to deal with endless financial forecasts of the fight, and sit in on concocted “media opportunities” where people spoke according to the Pentagon style book and with the sincerity of Phil Donahue discussing teenage pregnancy. There was a “Great Debate” between the trainers of both fighters. There was a story that Hearns’s man, Emanuel Steward, had taken elocution lessons before coming to this talkathon in the desert. But Angelo Dundee bested Steward when he made a sly reference to his beer commercial. Steward has yet to be tapped for a 30-second canonization.

No one was immune. Financial backers took bows and received ovations for supplying the arms that would make them millions. It could be said in favor of the munition makers that they stayed in the background.

The ante was upped when Leonard joined the lingo fray: “I try to perceive what’s distortion and what is meaningful,” he said. “I regard my opponent as too stiff and aggression orientated.” The latter gave rise to the notion that maybe the only mixing to be done would be with metaphors. Considering Ali’s and Duran’s recent performances, it was possible.

Hearns, who once upon a time uttered, nice, simple sentences like “I’m gonna lay some heavy hurt on his head,” also started to overextend himself. When the fighters weren’t mangling the mother tongue, their respective camps were carrying on about how their charges, despite the millions they have made, were still basic, sweet, simple kids. Huck Finns with portfolios.

The fight site wasn’t promising. Under the lights, the ring heat was over 100 degrees. And one couldn’t get any feel of community in the gerrymandered stadium built on Caesars’ tennis court.

But all this was inevitable considering the site of the fight. Vegas, one can guess, was created when Hollywood exiled its true vulgarians. Even the evenings offered no respite from the over-baked. Dinners were accompanied by strolling violin players in swallow tail coats, dewey-eyed, guitar-toting troubadours, or double-keyboard piano duets. Only Jose Iturbi and Esther Williams doing a water ballet with the cartoon Tom and Jerry were missing.

The most memorable sight was the 50-foot-tall white replica of the sculpture “David” that stands in a corridor of Caesars Palace dubbed the Appian Way. Just what Pope Julius would have commissioned if he had casino money.

One began to yearn for a good old fashioned bash on a barge. Not to be confused with Cleopatra’s Barge (a watering hole in Caesars). But at the ultimate moment of despair the fighters came to the rescue.

The fight site wasn’t promising. Under the lights, the ring heat was over 100 degrees. And one couldn’t get any feel of community in the gerrymandered stadium built on Caesars’ tennis court. Instead of the ethnic and racial slaver of a legitimate arena, the social breakdown was by finances and star status. It was significant of the social values that while movie stars and hustlers reigned at the $500 ringside the consummate Sugar Ray Robinson was relegate to the $50 bleachers. But when the bell tolled for the first round, the purification process began.

Hearns seemed the more confident of the two fighters. Using his reach advantage, he held Leonard at bay with his jab while occasionally landing his vaunted right. Leonard tried to implement his pre-fight plan of getting inside Hearns and going to the body, but Hearns’s jab negated the tactic. At the end of the second round, Hearns caught Leonard with a short right. Leonard’s left eye immediately began to water and puff. His face took on the resigned look of a man who knew he was in for a long evening.

At this juncture, Leonard had to do something to establish himself, or the tenor of the fight would irretrievably be Hearns’s. In the third, Leonard gambled, deciding to slug. He caught Hearns with a left-hand counter over Hearns’s low-slung right, a detrimental position that hand was held in throughout the fight. Hearns came back at Leonard, but his punches had a measured cadence—an honest two-step—while Leonard answered with flurries, a fevered fandango about Hearns’s head. A bizarre fact was established. With the exception of a possible one-shot big right hand from Hearns, the boxer Leonard could out-slug the puncher.

In the fourth and the fifth, the chastised Hearns went back to the unspectacular but effective basics of working the jab to the body and Leonard’s blossoming left eye. With the exception of the third round, the early terrain belonged to the dogmatic Hearns.

Hearns, obviously unwilling to believe he was being out-gunned by a dandy, came out in the seventh to slug again. This was nearly his undoing.

Then Hearns or his corner placed too much confidence in his limited achievements and forgot the lesson of the third round. Buoyed by Leonard’s inability to get inside and his worsening eye, Hearns decided to implement his right in the false impression that Leonard was his for the taking. But while he was throwing his right, he played to Leonard’s skills as a counter-puncher. For every right Hearns launched, Leonard answered with a fusillade of hooks and rights to the head, driving a battered Hearns into the ropes at the bell. At this point it was the most decisive round in the fight.

Hearns, obviously unwilling to believe he was being out-gunned by a dandy, came out in the seventh to slug again. This was nearly his undoing. Leonard battered him with several series of punches ranging in number from five to eight. Hearns, saved by the bell, wobbled to his corner on his spindly legs like a crane negotiating a frozen pond. Hearns was ready to be taken.

Then there was one of those rare swings that mark marvelous fights such as Ali and Frazier in Manilla. Hearns, in concert with his corner, decided his Armageddon strategy was faulty. Indeed, it was pathetic since nothing seems so sad as a big man being battered by a small man. The obscenity of the spectacle is that we are not tutored to expect it. Though the reverse is not any more appetizing, it is what we come to expect from life. Hearns had to feel he was entering the seventh circle of ridicule. To regain grace he became a bird of flight. From the eighth through the 12th, Hearns resorted to the boxing skills that had carried him to victory in more than 160 amateur fights. Until he turned pro, Hearns was never a puncher, having only a handful of knockouts in his career. In the pro ranks, he learned leverage which established his punching power. So Hearns stuck and ran, pausing occasionally to throw a limited combo and move out again.

The tactic seemed to handcuff the counter-punching Leonard. One can’t retaliate against air. In this span a rarity occurred. Five or six times the mercurial-fisted Leonard cocked a right only to abort it because his target was not there. Suddenly, pre-destined roles were totally reversed.

In the 10th, the fans began to boo the action. They hadn’t come to see the Detroit Hitman delve in fey tactics, no matter how successful. The other ominous note struck was that Hearns was not perspiring, while Leonard was sweating profusely. Hearns, who had difficulty making the 147-pound limit in his last few fights, weighed in at a surprising 145, one pound less than Leonard. A source close to Hearns said the fighter had resorted to the sauna and his dehydrated appearance gave credence to the whispers.

Though Leonard won the sixth and seventh by huge margins, Hearns seemed to have accumulated more winning rounds. He finished off the 12th with a solid right to Leonard’s now nearly closed eye. This aphrodisiac was too heady for Hearns or his corner. He started to exhort his fans to propel him on to annhililation. Little did he know it would be his own.

The battle was so intense, “close to death” as Ali called his fight with Frazier in Manilla, Leonard hardly looked like a winner either.

Hearns jettisoned the gossamer and decided to menace. The faster counter-punching Leonard, half-blind in his left eye and behind in the scoring, seized on the tactical mistake. For two rounds he battered Hearns unmercifully around the head and dropped him in the 13th. Another glaring flaw was exposed. Hearns didn’t know the rudiments of the clinch. A champion was ignorant of the elemental survival tactic of the ring. It was a mean memo on Hearns’s corner.

At 1:45 in the 14th, after Hearns had absorbed countless unanswered punches to the head, the fight was stopped. Exiting from the ring, he literally fell down the steps. The battle was so intense, “close to death” as Ali called his fight with Frazier in Manilla, Leonard hardly looked like a winner either. Exiting his dressing room for a post-fight interview in dark glasses, Leonard had to be supported by two aides as his wife, Juanita, wept.

Someone asked Leonard for his estimate of his valiant opponent and the undisputed champion replied: “Tommy Hearns is not only a fine athlete, he is a marketable commodity. You know what I mean. He could make commercials.” In the end, as it was in the beginning, the 20th Century was not to be denied.