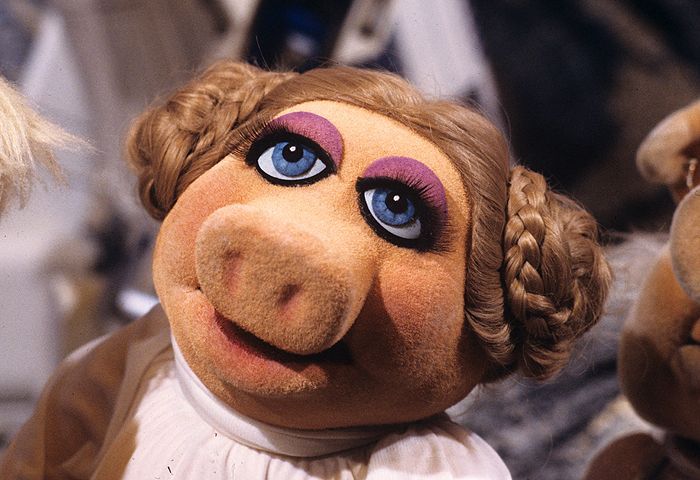 A sunburst blonde lolls on lavender satin sheets. Her mouth is large, scarlet, half-open. Her blank blue eyes smolder like sapphires in candlelight. “My beauty,” she murmurs breathily as her sensuous snout writhes with allure, “is my curse!” Swooning toward her, the camera reveals the luscious pink of her skin, the ripe contours (27-20-32) of her pigure. But to adoring millions it matters not that the lady is a hog. They worship Miss Piggy as the acme of porkritude, a pig of perfection, a new international sex goddess whose image has been stamped on pop culture in indelible oink.

Miss Piggy burst into celebrity as the star of The Muppet Show, a huge TV hit that is aired in 106 countries and seen every week by 260 million viewers—among them Sophia Loren and the prime minister of Britain. After only 11 weeks in release, Miss Piggy’s first feature film, The Muppet Movie, has grossed $50 million, and the Cincinnati-based CAMPO (Committee to Award Miss Piggy the Oscar) has amassed 20,000 fan letters demanding that she be named Best Actress of 1979.

She has wowed the critics too. Exulted one: “Miss Piggy combines the explosiveness of Anne Bancroft, the vulnerability of Judy Garland and the soul of Greta Garbo in a body that drives men mad. She is contradictory, mysterious, baffling. She is Woman.”

Contradictory indeed—but always the actress. One instant she is playing the Arrogant Superstar, snarling at her beefy litter bearers as she finishes her big Cleopatra scene: “Awright, meat! Let’s move it!” The next she is Daddy’s Little Darling, giggling and cooing: “I’ll only be an eeeeentsy-teentsy minute! Kissy, kissy!” Then without warning she drops a karate chop on a luckless reporter who has inquired about her weight problem. “When she looks in the mirror,” says the star’s dress designer, Calista Hendrickson, “Miss Piggy sees Twiggy—and you better not forget it.”

Moments later, pignacity phases into Blanche AvoirduBois as Miss Piggy enacts her idea of what it’s like to be a lady: Simpering and smirking, she parades her culture (“Are you speaking to moi?”), yet dresses up as Brünnhilde to sing—Puccini? When her agent calls, Miss Piggy transforms on the spot into a Capitalist Pig: “Okay, Marty, whaddya got? A commercial? How much? [Grunt.] Take it!” Yet she wilts like a broiled violet when the director cuts her solo. Then a glimpse of Rudolf Nureyev on the set brings out the beast in her. She pursues him into a steam bath, and when he staggers out his towel is at half-mast.

“Miss Piggy seems complex,” says Frank Oz, the enigmatic Svengali figure who has guided her career and acts as her spokesman, “because she is a seething mass of conflicts. She’s very vulnerable, and she’s been hurt a lot. It’s hard enough being a woman in our society. It’s even harder being a pig. On top of that,” he acknowledged to People correspondent Fred Hauptführer, “Miss Piggy doesn’t have the greatest body or the greatest voice. So there’s been rejection and pain. To protect her feelings, she’s built up layers of defenses. But underneath the glamor and the bravado she’s very serious and very courageous.”

Miss Piggy’s psychiatrist probes a little deeper. “She’s now at the point,” he confided indiscreetly, “where she could afford to ease up on her career and start a personal life. She wants to, but she’s afraid to. As a star she gets adoration without risk—it’s hard to give up. And then, too, like many women today, she’s had independence and she enjoys it. She also enjoys wealth and power. She’s had her consciousness raised,” he concludes, “but she still likes diamonds.”

There were no diamonds and not much consciousness in the Midwestern barnyard where Miss Piggy was born—only Miss Piggy knows when, and she isn’t telling. According to Oz, Miss Piggy’s father chased after other sows and her mother had so many piglets she never found time to develop her mind. “I’ll die before I live like that!” Miss Piggy screamed and ran away to the city.

Life was hard at first. People got all the jobs; pigs had to take what was left. To keep going, Miss Piggy walked a sandwich board for a barbecue stand. Desperate, she took a stage name, Laverne, and entered a beauty contest. She won and got her big break: a bacon commercial. This led to a season as mascot for a local TV sportscast called Pigskin Parade—and then on to The Muppet Show.

Laverne started in the back line of the chorus in 1976, but she didn’t stay there long. She had fallen head over trotters for Kermit, the frog who emcees the show, and during the performance, overwhelmed by desire for that puny pea-green body, she crushed the frog in a hog hug. Struck by her screen presence and sensing the drama in the situation, Oz persuaded Muppet producer Jim Henson to co-star Miss Piggy and the reluctant Rhett of her Scarlett daydreams. The rest is hogstory.

Miss Piggy’s passion for her “virile frog” rules her life. Easygoing, matter-of-fact, self-sufficient, Kermit is the calm green eye in the hurricane of Miss Piggy’s emotions. “There are two openings in life for a frog,” he says philosophically. “He can go into show business—or he can wind up on a plate. It isn’t easy being green.”

It’s Miss Piggy’s favorite color, and his indifference drives her wild. She hates exercise, but to get in better shape she has taken up pig-pong. She bats her enormous eyelashes till she blows the frog down and keeps asking him lewdly when he wants to open his birthday present. “Piggy mummy, Kermie daddy,” she twitters, imagining hogly matrimony. “Wouldn’t hims like a little pog?” Kermit shudders. All he can see is an endless succession of “bouncing baby figs.” But Miss Piggy refuses to admit rejection. “He wants me desperately,” she says with a self-satisfied sigh. “This little green thing crawling toward me, begging me to marry him. It’s a sad sight.”

Recently, to make Kermit jealous, Miss Piggy has launched some flamboyant affairs. “The Queen tried to fix me up with Prince Charles,” she told the British press. “The Royal Family wants nothing but the best for their boy.” But La Pig had other fish to fry. “I don’t want to name names,” she says, “because there are many big stars involved.” But Elliott Gould fessed up. “I turned down Miss Universe,” he says, “but I couldn’t turn down Miss Piggy.” And her co-star in The Muppet Movie, Charles Durning, asks with a sigh: “How can you say no to a lady with 16 breasts?”

Scandal breeds scandal. Noting her increasing girth, gossipists have speculated that Miss Piggy might be in a delicate condition. Noting a slight puffiness around her eyes, others wondered if she was battling the bottle. And certainly she has the equipment to be snorting something.

But by far the most insidious buzz-buzz is a recent report that Miss Piggy may not actually be a pig at all! Attributed to a disaffected pigolo who had been living high on the hog, the rumor has it that Miss Piggy is a puppet. In fact, according to this disturbing report, there have been 11 separate puppets. Made of soft foam rubber, allegedly of the same kind used in air-conditioning filters, the Miss Piggy puppets are said to wear out in six months. Early versions of the glamorous hambone were sculpted out of foam-rubber blocks; more recent versions have been formed of liquid latex poured into a mold. Her eyes are made of felt and plastic, and on each eye she wears two sets of false lashes.

Most of the 11 Miss Piggys, says the whispering campaign, haven’t even had gams. Instead, the story goes, a sleeve runs from the bottom of the skirt to the neck of the hollow skull—and the sleeve is tailored to fit the arm of the ubiquitous Mr. Oz. Proponents of the puppet theory believe that Oz speaks Miss Piggy’s lines and manipulates her lush body.

Oz (short for Oznowicz) is, in fact, producer Henson’s most brilliant puppeteer. Now 35, he grew up in Oakland, Calif. and got interested in puppets because they were his parents’ hobby. He admits he animates Fozzie and Animal on The Muppet Show and Bert and the Cookie Monster on Sesame Street. But he insists he is not Miss Piggy’s puppet master. “I just give her a hand,” he says. Miss Piggy emphatically agrees. “The whole story is grotesque,” she declared last week. “This man Oz is just somebody who follows me around, a hanger-on.”

Miss Piggy is mildly irritated by all these inswineuations—she sees them as attempts to strip her of her pignity. But she is truly outraged by reports that producer Henson, worried because she is stealing The Muppet Show from the other characters, may try to reduce her roles. “If Henson cuts his star,” she squeals, “he cuts his own throat. Without me, who will tune in just to watch a lot of stupid puppets?”