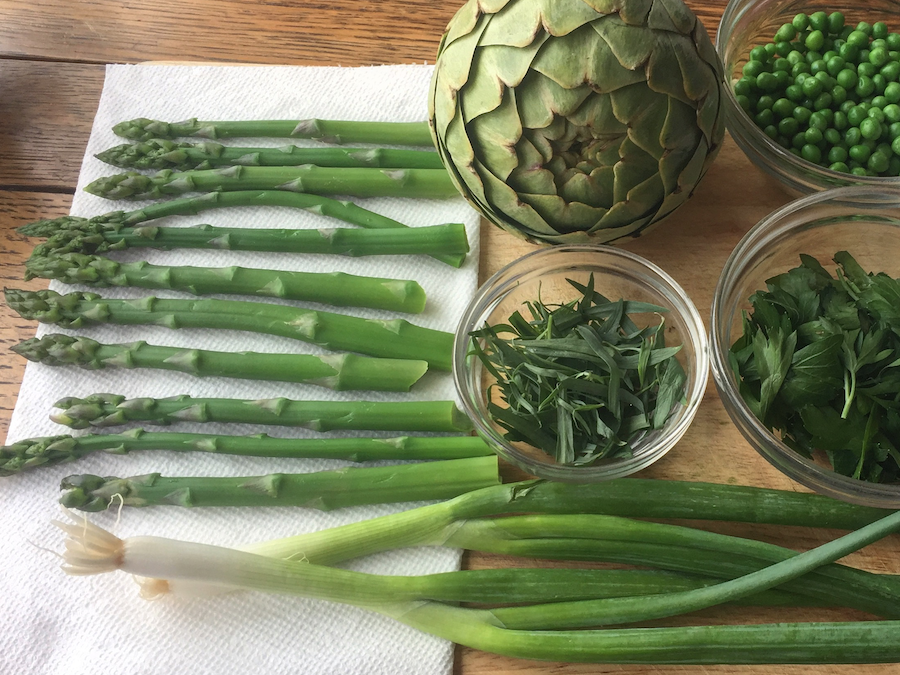 I am on the phone with Robert Kushner, a 23-year-old conceptual artist who makes clothes out of food, and we are having a discussion about what he will design for me.

“I’d love to make you something in asparagus,” he says. “I could get very excited about that—asparagus is in season now, and I’ve never worked with it before.”

A few days later, I go over to his place, on the Lower East Side of Manhattan, and Robert takes out of the refrigerator the halter he has made. “Cold, crisp, fresh, and beautiful,” he says, holding it up for me to admire. “Though you can’t really see the line till it’s on.”

The halter, mostly asparagus, has a radish inset and a scallion back, and Robert has made me a hard salami necklace to go with it. “I’ve only had two shows, so far,” Robert says as I try the halter on and he adjusts the asparagus. “For my first show, in California, I used only fruits and vegetables. I designed banana skirts, strawberry shirts, celery necklaces. Then I invited the audience to eat the food off the models, and we all had a lot of fun.

“My second show, in New York, marked a major development in my work because I moved from fruit and vegetables into cooked meats and cheese—I did Velveeta epaulets, my favorite work, in that show. Recently, I whipped up some stuff for an entertainment at Fairleigh Dickinson, but it wasn’t serious; they just wanted a few quick things the audience could have as appetizers before going in to dinner.”

Ten minutes later, Robert is chopping my halter into a large wooden bowl, adding mushrooms and feta cheese and onions and a red wine vinegar dressing, and we sit down to eat while he explains his art form.

Is this an expensive medium to work in?

“I couldn’t really say,” says Robert. “Like with this, a friend’s mother gave me the scallions and the salami, and I sort of borrowed the asparagus from this restaurant that I manage. But I’ll have to bring it back, because we’re having asparagus soup tomorrow.”

“Maybe we could have it for lunch ourselves?” I suggest, nibbling my necklace.

Ten minutes later, Robert is chopping my halter into a large wooden bowl, adding mushrooms and feta cheese and onions and a red wine vinegar dressing, and we sit down to eat while he explains his art form.

“Using food as subject matter creates a tension between food as food and food as ornamentation,” he says. “It’s kinetic sculpture, treating the body as sculptural form. There’s the public sexual confrontation of eating someone’s clothes. There’s the absurdity of it. And, of course, I always try to make the food taste good.

“You know,” he goes on, chewing a scallion, “you might really enjoy my next show. I’m going to have this costume made entirely from roast duck; duck mittens and duck slippers—only. Also a Jell-O dress. It will be part of a new concept where the models are wheeled out, and special assistants serve them. Maybe you’d like to model.”