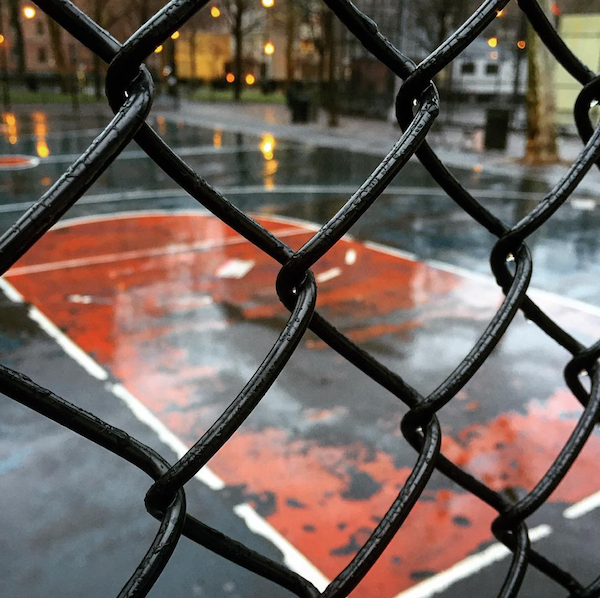 At 59, the novelist John Edgar Wideman has recently given up the game of playground basketball. His new memoir, Hoop Roots, originates in that loss, which is monumental, the terrifying and inevitable fate of every graybeard still trying to eke out another season on the asphalt, surrounded by fresh-legged youngsters who, with no intentional malice, call him “sir.” “I’m lost without the game,” cries Wideman of the sport he played for nearly 50 years, and his abandonment of it owing to age summons up nearly every other sorrow in his life — a failed marriage, a son and a brother in prison for murder, the injuries of racism.

At the book’s outset, he reveals his hope that the very act of writing Hoop Roots will make up for letting go of his passion, that it may even afford him the kind of fluidity and timelessness and unconscious grace provided by a good pickup game on a hot summer afternoon. Perhaps it will even allow him a mastery in the realm of writing comparable to Michael Jordan’s in his domain. “In my chosen field,” Wideman writes, “I can strive to accomplish what Michael Jordan has achieved in playing hoop — become a standard for others to measure themselves against.” And so he boldly freelances from one topic to another, an improvisatory method that results in a book of loosely gathered riffs and stories that range in style from soul-rending confessional to warm recollection to playful fiction to blistering polemic to tweedy, insufferable lecture.

Wideman movingly describes growing up in the Homewood section of Pittsburgh, fatherless and coddled by women. As a child, he sat for hours every day in his grandmother’s sickroom, keeping an anxious vigil. Wideman’s memories of that time form a sepia-tinted family scrapbook of heroic women, queens of nurture and household industry. The men are rarely home. They hang out in train yards drinking wine and shooting craps, and at the basketball courts. And it is there that young Wideman lights out for the territory, after being introduced to the sport by white workers on their lunch break who let the 8- or 9-year-old boy hoist a feeble shot at a raggedy hoop.

If you viewed Hoop Roots as a basketball game, its less felicitous moments would look like a contest played by graduate students in critical theory.

By themselves, these remembrances are often stirring. But Hoop Roots suffers from a herky-jerky movement between its various sections that dissipates its overall force. Wideman’s free-and-easy way with structure is reminiscent of a player who goes up into the air not knowing whether to shoot or pass. Sometimes he twists in a dazzling layup. Sometimes, having nowhere to go, he comes back down and travels.

In fact, if you viewed Hoop Roots as a basketball game, its less felicitous moments would look like a contest played by graduate students in critical theory. Shall we say that their game lacks flow? Though the players are erudite and enthusiastic, they’re clanging shots off the backboard and booting the ball out of bounds and bouncing off one another like competing interpretations of Middlemarch. When what you really want to witness is a point guard with a mean crossover dribble getting into the lane, what you get instead is an old guy sermonizing about the semiotics of ball — Derrida in baggy shorts. “If playground hoop is about the once and only go and flow of time,” Wideman writes, “writing foregrounds the alienating disconnect among competing selves.” As they say on the playground, take that weak stuff out of here!

Wideman can’t resist showing how much he’s learned as an English professor — he mentions Proust, Poe’s rules for the short story (with which Wideman interrupts an absorbing stretch of fiction), “the dominant language culture” and the Prix Goncourt. When he breaks up the narrative, he’s like a guy doing commentary on his own game as he plays alone in the backyard. Wideman fakes the short story, goes to his left to deconstruct, but fails to score — because there is no self to score!

Hoop Roots succeeds when it embodies (or, at least, addresses) how it feels to play the game, not what the game means. Wideman’s prose comes across as truest when he rhapsodizes and when he tells stories. “The game,” he writes, “like gospel music, propagates rhythm, a flow and go, a backbeat you can tune into so time’s lonely, featureless stretch feels as charged, as sensuous, as accessible a medium as wind or water.”

His eye for the particularities of the sport is so keen, so informed by his years of prowess (Wideman turned down the chance at a professional career to accept a Rhodes scholarship), that one often wishes he would just report what he sees. At a downtown New York court that appears to be the legendary West Fourth Street hardtop, Wideman carefully observes a young, bare-chested, bandanna-wearing player he calls “the do-rag man.” Wideman’s simultaneous admiration for and discomfort with the fellow’s exhibitionistic flash constitute the same ambivalent attitude that pervades the American view of black basketball players. “His drive to the hoop part serious business, part mesmerizing razzle-dazzle like the flying rags of shoeshine boys, the airborne hand jive of three-card monte hustlers over their little handkerchief-covered, folding tables on the tracks of Harlem and Times Square. Now you see it, now you don’t.” In its jitterbugging eloquence, this passage is a vastly superior expression of Professor Wideman’s following declaration: “Playing hoop, African-American men act out a symbolic version of who they are, who they want to be.”

Another section of Hoop Roots also calls to mind the theatrical swagger of street ball. It is an imaginary account of the Harlem Globetrotters barnstorming into the nearly lily-white town of Hinckley, Ill., in 1927. This pulpy cartoon of a narrative surges forward with a burlesque rapacity that mingles history and fiction in a fashion reminiscent of Jean-Luc Godard’s political movies of the ’60s.

In such moments, Wideman’s memoir becomes the place where Michael Jordan meets the do-rag man, where strut and swoop is the inevitable byproduct of intense focus and desire. If only every page resonated with such stylish play. And yet, even with all of its academic mumbling, the book manifests considerable power as an act of furious compensation. Rather than just another “old head” peering querulously at a new generation of players through the chain-link fence of a court he once ruled, the Wideman of Hoop Roots is a tortured solitary desperately looking backward, trying to collect enough of the past to give him strength in a darkening future.