Comedy is Not Pretty 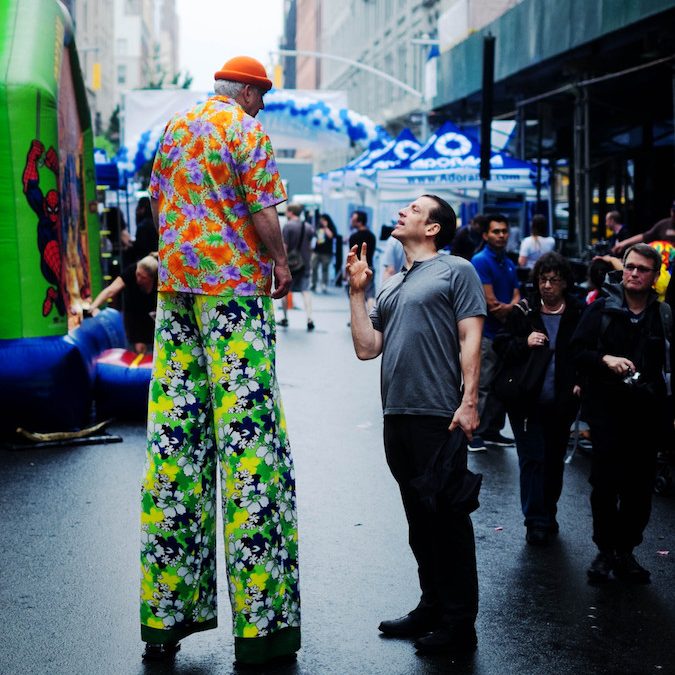 Charlie Barnett was pivotal in getting started as a full-time journalist. I spent close to six months—a late fall, entire winter, and early spring—watching him and getting to know his story—not only his crack addiction, but everything I could glean leading up to it. The story was very successful, but did not have a good impact on Charlie. He disappeared for a good two weeks, maybe longer, until I saw him again, doing a show in Washington Square Park to a huge Saturday crowd. Toward the end, he spotted me, asked if people had read the story, then introduced me—I actually got a round of applause. During it, he raised his voice just above the crowd noise (his ability to work a room was astonishing, and he was always best in a wide open space: “I started out to become the country’s most famous comedian. Instead, I became the most famous crackhead.”

We’d meet off and on over the next months, giving me a chance to make amends with a spare $20 if I had it. We got together formally only once. He’d been invited to an art opening in Soho, and wanted me there to make an impression on Russell Simmons, who’d recently started an HBO stand-up series. It was no use: Russell knew Charlie’s talent, but also the havoc his addiction brought. He cut me off quickly with something to the effect: “No one would be more happy to help this man, but it’s Charlie that’s got to help himself first.” I had to agree with Simmons. A few weeks earlier, an early call I’d gotten about film rights had finally crystallized into a hard offer: The backer wanted the producer/director to introduce him first, however. We set up a time at some restaurant in the Village, shook hands, ordered coffee, and began to wait for Charlie, who never made it. My agent, who’d taken Charlie on for the project, said he’d been in a day earlier, hoping to get cash from her, $20 or so, against the future earnings. The contract, all told, was for some $250,000.

Six months later, I got a call from Charlie, who was in hospital. His speaking voice, which one never heard in performance, was heavily accented, part Southern (much of his childhood was spent in the Carolinas), part street. He could be hard to understand at times, and when I asked why he was in hospital and he told me, with a sound of a metal tray clicking in the background, that he had AIDS, I thought he’d just told me he was being served eggs for lunch. He wanted to see me, and I promised to come soon. I don’t remember why, but I never made it—he died very quickly, but I think I also put it off too long. If I remember correctly, I was broke, and worried about the $20. It’s the great unpaid debt of my life.

My guilt over Andrew Dice Clay was quite different—as professional as the feelings for Charlie are personal. I never met him, for one thing: in fact, I hadn’t even heard of him the morning I got the assignment to cover his concert that night at the Meadowlands. Unprepared for the Nuremberg spectacle of his shows, I reacted very quickly: I think it’s my only piece written in typical newspaper fashion: go home, sit in front of a machine and type till the word count’s hit. I had nothing good to say about the man, and a few follow-up interviews the next day confirmed my take: He was an asshole, and his crowd was scum. As far as I was concerned, it was just a night out of my life. Check, please.

Then the calls started coming: Ted Koppel, Barbara Walters, the tabloids, etc. Even with the sold-out Meadowlands crowd as witness, I had no idea he was so much IT in that particular wrinkle of time. I had nothing more to add—I’d barely made the word-count—and I didn’t return the calls.

I still don’t know why I took such a hostile tone: the show was dumb, and the audience really offensive to me—embodiments of the lowest moment of the Reagan years—but I’d learned how the business worked by then.

A week or so later, I started getting more calls: friends, colleagues, etc., telling me about his appearance on, I believe, The Arsenio Hall Show. The host had brought up the article, which had run on the cover of The Voice, and had read parts of it aloud. I was told that Dice Clay, after taking the expected umbrage in his Dice Clay persona, had suddenly reverted to his Andrew Silverstein reality, and began choking up about the evisceration handed him—how, out of 20,000 people in the crowd, I was the only one heard. A few people calling felt I should be extending an apology to him: I didn’t disagree so much as feel it was unnecessary. As above, it was just a night of my life, an assignment I’d stumbled into and hoped to forget.

Flash forward 20 years, and I’m watching Entourage with my kids, the season in which Dice Clay has an extended cameo as a washed-up celeb, desperately needing work. I realized that what I’d really bitch-slapped, as one of the comedy industry professionals I interviewed had advised, was just an act—a schtick—a comedian who’d had marginal success had come up with. Granted, it was an offensive schtick, but that should’ve endeared me. Comedy that doesn’t offend—unless it’s Robin Williams—is something I’m probably not going to laugh at. I still don’t know why I took such a hostile tone: the show was dumb, and the audience really offensive to me—embodiments of the lowest moment of the Reagan years—but I’d learned how the business worked by then.

It did give me a first-hand taste of the power of the press. Rather than feel self-loathing—as I say, it was just a night of my life—I extend the sentiment to the countless media types I see abusing the privilege, almost every day. Some are even people whose work I respect: It’s simply a lesson they haven’t learned yet.