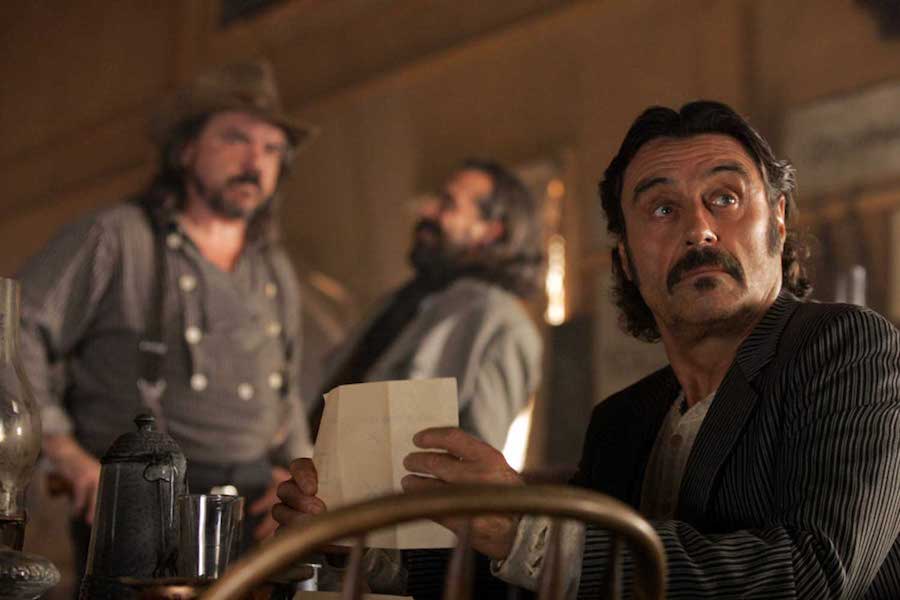 “The boardwalk squeaks and out come the freaks,” declares Ian McShane, plainly including himself in the assortment of street preachers, panhandlers, and body builders gathered at Venice Beach on this foggy spring morning. Black hair greased back from a creased brow and unshaven face framed by long sideburns, the actor – who’s decked out in a blue Hugo Boss car coat, blue T-shirt, and blue nylon sweat pants – could be a color-coordinated flasher. Yet as McShane makes his way north along the promenade, nearly everyone recognizes him. Exclaims a skateboarder: “It’s the guy from Deadwood!”

As Al Swearengen, the preternaturally profane bar and bordello proprietor in HBO’s hit series Deadwood, McShane has become in the course of just a season and a half the most captivating character on television. Like James Gandolfini’s Tony Soprano and, to a lesser extent, Dennis Franz’s Andy Sipowicz, Swearengen is violent, saturnine, and pragmatic. Week in, week out, he wages a conflict between appetite and order that will seemingly never be resolved. In Swearengen, the nation’s id and its superego face off.

For McShane, who at 62 has been a working actor for more than 40 years, the attention (Deadwood’s March premiere attracted the largest audience of any series on cable this year) is gratifying, although as he strolls along the boardwalk, a Lucky Strike in one hand and a cup of coffee in the other, he is almost too exhausted to enjoy it. The previous night he had been on the show’s set near Magic Mountain until all hours, and he’ll be back there later today. “We’re working on the season’s final episode, and I’m tired,” he says in his rasping, English accent. “Back in the 1970s, Billy Wilder told me that at this stage of any creative endeavor, it’s like fucking after you’ve come.”

At this, McShane flashes a devilish grin that acknowledges his observation as the sort of truthful but obscene comment typical of Swearengen. Indeed, when The New York Times primly dismissed Deadwood as a “foul-mouthed frontier drama,” it was his character to which the paper was referring. “Too much has been made of the cursing,” McShane grumbles. “Get over it.” Yet he concedes that upon meeting him, strangers behave as if they’ve been given a license to talk dirty, frequently spouting the three-syllable word that begins with c and ends with r that has become his on-air signature. “A girl walked up to me the other day and said, ‘My mother wants me to tell you that you say cocksucker like nobody else in the world.’”

Though McShane’s turn in Deadwood smacks of overnight success, he has never gone begging for parts. As early as 1969, he starred as the energetic tour director in the Hollywood feature If It’s Tuesday, this Must Be Belgium. More recently, he has played Prince Rainier in NBC’s The Grace Kelly Story and the urbane antiques dealer and title character in the long-running BBC series Lovejoy. Still, it wasn’t until he took on the role of unregenerate hood Teddy Bass in the 2000 crime film Sexy Beast  that he caught the attention of Deadwood creator David Milch. Soon thereafter, the pilot script for Deadwood arrived in London; within months, the actor purchased a penthouse condominium above Venice Beach. “I just had a feeling about this show,” he says.

“Al, despite his machinations and primitive instincts, looks to the future. He knows things are changing in Deadwood. He knows they have to change or he’ll be destroyed. Capitalism will eat itself – it sounds like America today.”

Like so many Brits, McShane craves salt air and sunshine as antidotes to the rain and gloom of home. (The son of a star left winger for the Manchester United soccer club, the actor grew up in England’s grimiest industrial city.) At the same time, however, he loathes the “private enclaves” of Santa Monica and Malibu – which makes Venice Beach perfect for him.

Days when McShane doesn’t have an early call always begin with a walk up the boardwalk. His first stop is Jodi Maroni’s sausage stand, where he prefers the Cajun andouille, an order that prompts dark jokes about the frequency with which dead bodies are deposited in the hog slop on Deadwood.  He then ducks into the Small World Book Shop. A devoted bibliophile (during the course of an hour he quotes Samuel Johnson, mystery novelist James Crumley, Shakespeare, and Lenny Bruce), he is looking forward to diving into Robert Hughes’ new biography of Goya as soon as production winds down.

Married for twenty-five years and, after decades of, as he suggestively puts it, “active social life,” sober for seventeen, McShane likes nothing more than talking about his children, his grandchildren and the joys of domesticity, but Swearengen is never far from his mind. To get in the mood for another day of cursing and killing, he cranks up Led Zeppelin on his car CD player during the long drive to the set. By the time he walks into costuming, he’s ready. “I put on that suit – the black frock coat with pinstripes – and the union suit underneath, and I’m in character. I don’t let them wash the union suit very often. It stands there, waiting for me.”

McShane believes that he’s just begun to explore Swearengen’s character. “Al, despite his machinations and primitive instincts, looks to the future. He knows things are changing in Deadwood. He knows they have to change or he’ll be destroyed. Capitalism will eat itself – it sounds like America today.”

As McShane explores Venice Beach, he finds inspiration for his character everywhere. The Tarot card readers, the elderly, and the infirm – any of them could be citizens of Deadwood. But it’s a gaggle of extremely buff young joggers that prompts his most Swearengen-like aside. Observing the churning legs and glistening torsos of these oppressively healthy specimens, the actor takes a long drag on his cigarette and snarls, “Youth can always be overcome by wisdom and treachery.” Change the line to “Fucking youth,” and it could air next year.