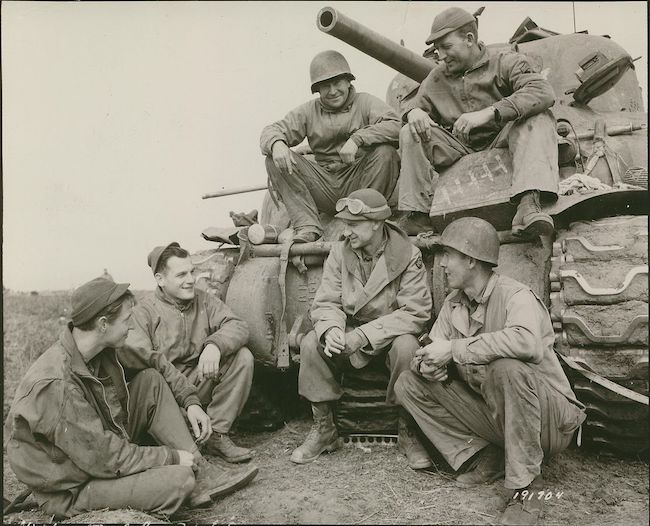 IN NORMANDY—(by wireless)—Lieut. Orion Shockley came over with a map and explained to us just what his company was going to do.

There was a German strong point of pillboxes and machine-gun nests about half a mile down the street ahead of us.

Our troops had made wedges into the city on both sides of us, but nobody had yet been up this street where we were going. The street, they thought, was almost certainly under rifle fire.

“This is how we’ll do it,” the lieutenant said. “A rifle platoon goes first. Right behind them will go part of a heavy-weapons platoon, with machine guns to cover the first platoon.

“We don’t know what we’ll run into, and I don’t want to stick you right out in front, so why don’t you come along with me? We’ll go in the middle of the company.”

I said, “Okay.” By this time I wasn’t scared. You seldom are once you’re into something. Anticipation is the worst. Fortunately this little foray came up so suddenly there wasn’t time for much anticipation.

The rain kept on coming down, and you could sense that it had set in for the afternoon. None of us had raincoats, and by evening there wasn’t a dry thread on any of us. I could go back to a tent for the night, but the soldiers would have to sleep the way they were.

We were just ready to start when all of a sudden bullets came whipping savagely right above our heads.

“It’s those damn 20-millimeters again,” the lieutenant said. “Better hold it up a minute.”

The soldiers all crouched lower behind the wall. The vicious little shells whanged into a grassy hillside just beyond us. A French suburban farmer was hitching up his horses in a barnyard on the hillside. He ran into the house. Shells struck all around it.

Two dead Germans and a dead American still lay in his driveway. We could see them when we moved up a few feet.

The shells stopped, and finally the order to start was given. As we left the protection of the high wall we had to cross a little culvert right out in the open and then make a turn in the road.

Some of the men carried grenades already fixed in the ends of their rifles. All of them had hand grenades. Some had big Browning automatic rifles. One carried a bazooka…The men didn’t talk any. They just went.

The men went forward one at a time. They crouched and ran, apelike, across this dangerous space. Then, beyond the culvert, they filtered to either side of the road, stopping and squatting down every now and then to wait a few moments.

The lieutenant kept yelling at them as they started:

“Spread it out now. Do you want to draw fire on yourselves? Don’t bunch up like that. Keep five yards apart. Spread it out, dammit.”

There is an almost irresistible pull to get close to somebody when you are in danger. In spite of themselves, the men would run up close to the fellow ahead for company.

The other lieutenant now called out:

And a first sergeant said to a passing soldier:

“Get that grenade out of its case. It won’t do you no good in the case. Throw the case away. That’s right.”

Some of the men carried grenades already fixed in the ends of their rifles. All of them had hand grenades. Some had big Browning automatic rifles. One carried a bazooka. Interspersed in the thin line of men every now and then was a medic, with his bags of bandages and a Red Cross arm band on the left arm. The men didn’t talk any. They just went.

They weren’t heroic figures as they moved forward one at a time, a few seconds apart. You think of attackers as being savage and bold. These men were hesitant and cautious. They were really the hunters, but they looked like the hunted. There was a confused excitement and a grim anxiety in their faces.

They seemed terribly pathetic to me. They weren’t warriors. They were American boys who by mere chance of fate had wound up with guns in their hands sneaking up a death-laden street in a strange and shattered city in a faraway country in a driving rain. They were afraid, but it was beyond their power to quit. They had no choice.

And even though they aren’t warriors born to the kill, they win their battles. That’s the point.

This piece is collected in Reporting World War II: Part Two: American Journalism 1944‒1946, published by The Library of America.