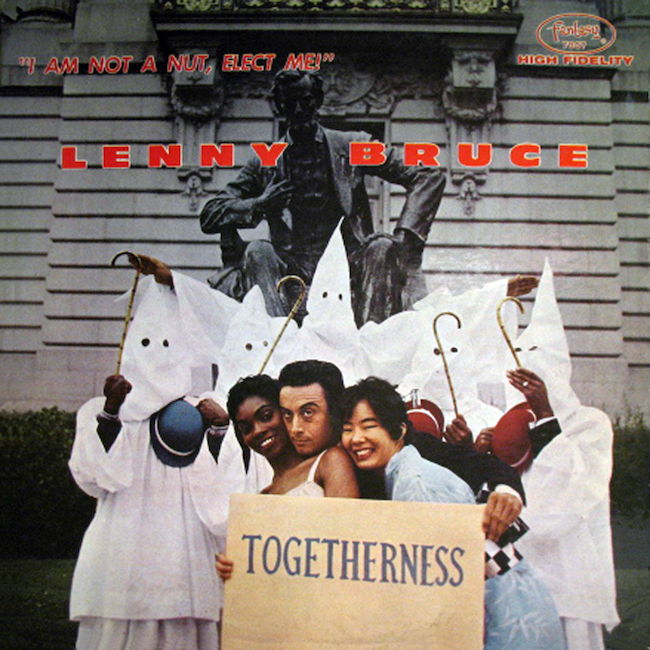 We come, with mixed feelings, to the Case of Lenny Bruce. You probably have an opinion—who doesn’t?—but sit still long enough to hear ours. First, so that no matter how finky you finally think our stand is, let it be triple-clear that we don’t think Lenny should go to jail for any reason except to play a benefit. As you know, he is facing possible prison terms for both “obscenity” (in Chicago—where else?) and the possession of narcotics (on the Coast). The obscenity rap is questionable in every sense, bringing into play as it does unsettled ideas of taste, propriety, freedom of expression, just how far an artist or performer is entitled to go. To us the only limit is the imagination. But for the majority of people these questions are up in the air all over the country and to make Lenny the martyr for all the dirty mouths around is vindictive and unjust, even if at times he seems to desire a niche in history as a Copacabana Jesus.

As far as the narcotics charge goes, everyone knowledgeable in this area knows that our laws stink. A small army of psychiatrists, lawyers, general MDs and reporters will tell you how indisputably barbaric it is to call addiction a crime in 1963. A user has all the free choice of a terrified passenger in a careening New York taxi; it’s out of his control to be punished for that is just about stupid as society can get. As in the question of so-called obscenity, enlightened public opinion can only stand by Lenny (whether he is a user or not isn’t the real point) and agitate even harder for some progressive legislation in this crummy back alley of American life.

But the phenomenon of Lenny, as you know, goes much deeper than his contest with the law. His admirers—and they include two of our most outspoken jazz critics, Ralph J. Gleason and Nat Hentoff, as well as some of the most perceptive newspapermen and social critics strung across the country—see Lenny as a fearless black knight who is lancing the pustules of our age. They use the word “genius” in speaking of him and there is no self-consciousness when they do so. This is especially true of nightclub and entertainment writers, men who cover this beat and can truly appreciate how radically Lenny has changed the entire criterion of afterdark entertainment in the last six years—changed it from forced frivolity, gags, one-liners, to the most ferocious kind of humor that claws into blisters of sex, race, religion, hypocrisy, etc. In their eyes Lenny could no longer be thought of as the conventional comic dear to burlesque, radio, TX, not even as an extension of the acidly clever Mort Sahl. He became (we are told) a kingsize social prophet trying to awaken a sick, numbed populace from its moral coma.

O.K. We dug the sloth out of our ears and listened closely to every word in Lenny’s five taped-on-the-spot albums. We caught him at the Vanguard in Manhattan and got our friends to send us long reports on his appearances in courts and clubs all over the country. Revolutionary individuals are the lifeblood of the arts, and ultimately of society, and Nugget is acutely sensitive to their presence because—frankly—we want to learn from them and incorporate their messages into our pages.

It’s as if someone with nightclub pallor tried to pretend that sunshine was either square or didn’t exist—a cunning distortion of reality.

And Lenny comes out to about 50-50, no more and no less, on our scorecard.

Here’s why. Although an original satirist and a brilliant mimic—a man who grew up on movies that way other people read books and can zip through a dozen convincing roles in an 8-minute bit—we found a monotonous sameness to his material. The world, yours and ours, isn’t made up only of junkies, Hollywood, other comics, minority groups, sexual aberrations, four-letter words and so on. As good paidup hipsters, we nevertheless found ourselves getting restless by the tight horizons that enclose Lenny’s world and getting angry when he tried to act as if this was everyone’s view from the bridge. It just ain’t and it’s surprisingly provincial of Lenny to think it is. It’s as if someone with nightclub pallor tried to pretend that sunshine was either square or didn’t exist—a cunning distortion of reality.

We admired Lenny’s deft roasting of obnoxious types (once again his expert and loving mimicry is invaluable) but found his neo-Christian morals naive and pretentious, redeemed only by his obvious sincerity. But can actual ignorance be excused by conviction? When Lenny came out with the cheaply sentimental line that “Jimmy Hoff is more of a Christian than Christ because he hires ex-convicts” we thought he was kidding—this shallow half-truth is profundity? But he wasn’t kidding. Lenny the Jazz Circuit Hegel truly believes this thought and is flattered in his pontifical minor blasphemies by better-educated critics who swallow the sheerest adolescent crap from him with “Go, man!” enthusiasm.

Lenny is that new, mod phenomenon who can preach God’s message to belching Scotch-guzzlers while he gets rewarded with more yearly loot for his “courage” than most of us will ever see in a lifetime.

But all of this is only the most superficial part of our gripe. The most objectionable aspect of Lenny to us is something much more serious. We refer you to the standard refrain that he’s been muttering lately, which gets quoted in the papers this way: “It’s just like Kafka.” What Lenny means in his avantgardey, status (“Kafka? Certainly I dig Kafka, baby, you think I’m Bob Hope or something?”), inaccurately chic way is that the society he has willfully baited now pesters him with legal subpoenas, denies him entrance to England, in short makes his life a small hell of redcap and harassment.

And it’s just in this area that our sympathy grows tough.

Mature artists and rebels through the well-known ages have assumed, early on, that they were in opposition their times and that they would be suffering from picture postcards in the brain to expect kindness from the social order they ridiculed. From Swift to Celine, they whined not, neither did they knock down $2,000 per week for their hatred of phoniness and injustice. But Lenny is that new, mod phenomenon who can preach God’s message to belching Scotch-guzzlers while he gets rewarded with more yearly loot for his “courage” than most of us will ever see in a lifetime. There is something spookily unreal, incongruous, outrageously theatrical about this kind of new nightclub holiness. It flashily erases all the sacrifices men and women throughout history have always mad etc cling to their unpopular vision. Lenny, the Boy Martyr, would have his stake and cop headlines in Variety too: a crucifixion on TV as the climax, maybe, with $200,000 plus residuals to go to his mother and ex-girlfriends (because don’t forget, he has a practical Jewish head as well as a saintly universal one).

We’ve suggested some of our reservations about Lenny’s Crusade but surprisingly enough we hope time will prove us wrong. We hope the cheapness and semiliteracy and pretension and ignorance that we hear in Lenny is our our stiffness or deafness or (who knows?) envy and that he will emerge in the eyes of the immediate future as the sacred, shamanlike figure he is touted as being. Because if this doesn’t happen what a stew of adolescent half-truth and wisely self-deception he will have handed out to an already confused and reeling audience: us.

The originality of Bruce’s art developed in a much weirder and unexpected way after this was written and I became an addict like the rest of us; but I’ve let this stand because he had read it and asked me to edit a fast-buck collection of his miscellany on the basis of dealing straight with him. He faded away, literally, while we were setting it up.