Once There was Elation 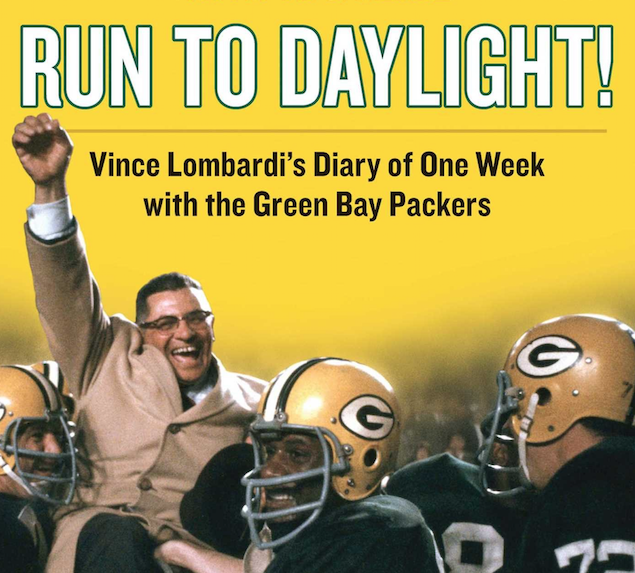 I have been asleep for three hours and, suddenly, I am awake. I am wide awake, and that’s the trouble with this game. Just twelve hours ago I walked off that field, and we had beaten the Bears 49–0. Now I should be sleeping the satisfied sleep of the contented but I am lying here awake, wide awake, seeing myself walking across that field, seeing myself searching in the crowd for George Halas but really hoping that I would not find him.

All week long there builds up inside of you a competitive animosity toward that other man, that counterpart across the field. All week long he is the symbol, the epitome, of what you must defeat and then, when it is over, when you have looked up to that man for as long as I have looked up to George Halas, you cannot help but be disturbed by a score like this. You know he brought a team in here hurt by key injuries and that this was just one of those days, but you can’t apologize. You can’t apologize for a score. It is up there on that board and nothing can change it now. I can just hope, lying here awake in the middle of the night, that after all those years he has had in this league—and he has had forty-two of them—these things no longer affect him as they still affect me. I can just hope that I am making more of this than he is, and now I see myself, unable to find him in the crowd and walking up that ramp and into our dressing room, now searching instead for something that will bring my own team back to earth.

“All right!” I said. “Let me have your attention. That was a good effort, a fine effort. That’s the way to play this game, but remember this. You beat the Bears, but you know as well as I do that they weren’t ready. They had key personnel hurt and they weren’t up for this game. Those people who are coming in here next week will be up. They won again today, so they’re just as undefeated as we are. They’ll be coming in here to knock your teeth down your throats, so remember that. Have your fun tonight and tomorrow, but remember that.”

“Right, coach!” someone behind me, maybe Fuzzy Thurston or Jerry Kramer or Ray Nitschke, shouted. “Way to talk, coach!”

Am I right and is that the way to talk, or has this become a game for madmen and am I one of them? Any day that you score seven touchdowns in this league and turn in a shutout should be a day of celebration. Even when the Bears are without Bill George, who is the key to their defense, and Willie Galimore, who is their speed, this is a major accomplishment. But where is the elation?

What success does to you. It is like a habit-forming drug that, in victory, saps your elation and, in defeat, deepens your despair.

Once there was elation. In 1959, in the first game I ever coached here, that I ever head-coached anywhere in pro ball, we beat these Bears 9–6 and I can remember it clearly. I can remember them leading us into the last period and then Jimmy Taylor going in from the 5 on our 28-Weak, and Paul Hornung kicking the point, and then Henry Jordan breaking through on the blitz and nailing Ed Brown in the end zone for the safety. The year before, this team had won only one game and tied one out of twelve, so now they were carrying me off the field because a single league victory was once cause enough for celebration.

What success does to you. It is like a habit-forming drug that, in victory, saps your elation and, in defeat, deepens your despair. Once you have sampled it you are hooked, and now I lie in bed, not sleeping the sleep of the victor but wide awake, seeing the Detroit Lions who are coming in next Sunday with the best defensive line in the league; with Joe Schmidt, that great middle linebacker; with Dick “Night Train” Lane, that left defensive halfback who is as quick and agile as a cat; and with Milt Plum at quarterback who, although he is not as daring as Johnny Unitas or Y. A. Tittle or Bobby Layne, can kill you with his consistency.

I don’t see them as I do from the sideline, but as I have seen them over and over in the films. I see them beating us 17–13 in our opener in Milwaukee in 1961. I see them beating us 23–10 in Detroit the year before, and that’s what I mean about success. My mind does not dwell on the two games we beat them in 1959 or the single games we took from them in 1960 and again in 1961. For the most part you remember only your losses, and it reminds me again of Earl Blaik and West Point after Navy beat our undefeated Army team 14–2 in 1950.

“All right,” the Colonel would say whenever there was a lull. “Let’s get out that Navy film.”

You could see the other coaches sneak looks at one another, and although you couldn’t hear the groans you could feel them in the room. Then we’d all file out and into the projection room once more.

“Look at that,” the Colonel would say. “The fullback missed the block on that end.”

Lying there like this, in the stillness of my house and conscious of any sound and every sensation, I am aware now of the soreness of my gums.

How many times we had seen that fullback miss that block on that end I do not know. I do know that every time we saw that film Navy beat Army again, 14-2, and that was one of the ways Earl Blaik, the greatest coach I have ever known, paid for what he was.

So what I see now is that opener in ’61, the last time they beat us. I see them stopping us twice inside their 5-yard line. I see us running their quarterback, Earl Morrall, out of his pocket, the rhythm of that pass-play broken, and both their split end, Gail Cogdill, and Jesse Whittenton relax. I see Cogdill start up and Whittenton slip and Cogdill catch it and run it to the 1, and on the next play Nick Pietrosante takes it in. Then I see them on our 13-yard line and Pietrosante misses his block and falls. As he gets up, Morrall, in desperation, flips the ball to him and he walks the 13 yards for the score.

Lying there like this, in the stillness of my house and conscious of any sound and every sensation, I am aware now of the soreness of my gums. It is this way every Monday, because for those two hours on the sideline every Sunday I have been grinding my teeth, and when I get up at eight o’clock and put in my bridge I’ll be aware of it again. That, come to think of it, is only fitting and proper, because that bridge had its beginnings in the St. Mary’s game my junior year at Fordham. Early in that game I must have caught an elbow or forearm or fist, because I remember sitting in that Polo Grounds dressing room during halftime and it felt like every tooth in my head was loose.

“So I judge you won’t be home for dinner,” Marie says, while I am having my second cup of coffee.

“No,” I say, and that is another part of the price that you and your family must pay. Maybe I’m wrong, but the only way I know how to coach this game is all the way, and what it costs, Marie once explained.

“From Monday until Wednesday night,” she said, “we don’t talk to him. On Wednesday he has to go out there and convince himself and five other coaches and thirty-six football players.”

I drive down our street to the corner, and I have to wait there because at this hour the traffic is heavy going into town. It is heavy with men who must convince other men that they need more insurance or new storm windows or a new car or who must solve a heat-conduction problem or an efficiency lag, and there is not much difference between us. Some of us will do our jobs well and some will not, but we will all be judged by only one thing—the result.

From Run to Daylight. Read David Maraniss’ introduction to the 2014 edition.