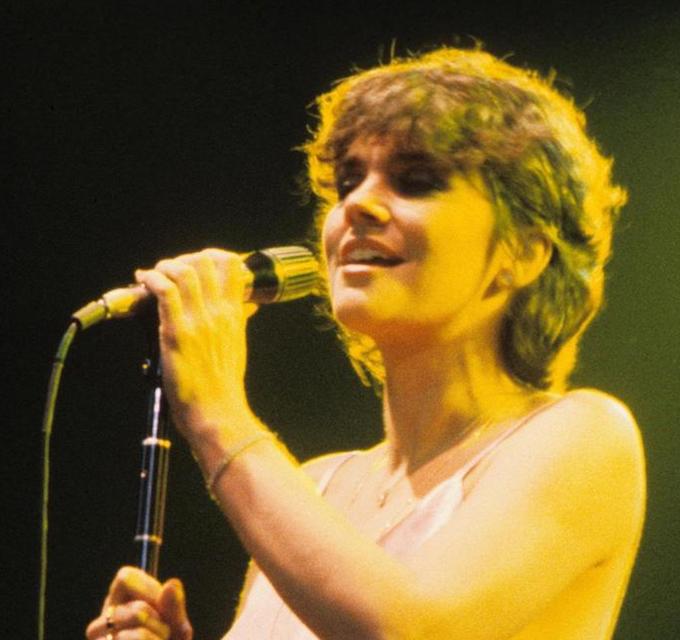 [From Eve’s front of the book column titled “Love & Science”]

I have been thinking that Linda Ronstadt is more politically effective than Jane Fonda. Linda has made the world safe for Mexican music. I mean, all Jane’s done is to go from being a movie star’s daughter to not quite apologizing for Vietnam with that Tom Hayden, the reason, I’ve heard, the women’s movement was instigated in the first place. The worst that Linda’s ever done is to think Jerry Brown was maybe a little cuter than he actually was, and who can blame a girl for that? At least she didn’t marry him.

Watching Linda sing that great mariachi song at the Grammys was what gave me the idea—because it was really the first time I’d heard her sing anything where she wasn’t getting a knife in her heart over some man (unless that was what was happening in Spanish and I didn’t notice). Her voice and everything about her was so opulent with happiness and excellence that it seemed to me she could take this entire country for a grand ride that would last at least eight years, if not more, if we elected her to something she deserves, like president.

She could date all the other heads of state and we’d hear a lot of great songs and meet a lot of new musicians, and there’d be a lot of great parties and the bon temps would definitely rouler. Naturally, it would be a musicological term of office, since there’s really nothing that Linda does better than sing—the notes floating out of her throat into the sky like pale-pink and yellow and lavender clouds one day and hot chili-pepper reds and anaranjados and negros the next, when she’s in a less pastel and more caliente mode.

The great thing about Linda is that none of her adorable moments has involved Republicans even for an instant, proving that no matter how cute a guy is, there’s a point beyond which she will not go.

I mean, talk about making a silk purse out of a sow’s ear—Linda has gone from what in most of us would lead to heart disease, obesity, and gas (i.e., Mexican-restaurant ambience) and she’s turned it into this great Songs of My Father album and gets to wear the dangling earrings, a rose in her hair, and those cute little boots. It’s really adorable—another adorable episode in a life already strewn with adorable moments. And the great thing about Linda is that none of her adorable moments has involved Republicans even for an instant, proving that no matter how cute a guy is, there’s a point beyond which she will not go.

I remember the first time I ever saw Linda Ronstadt in person. It was in the Troubadour, and she was on her way into the club part, talking a mile a minute to two gray-haired business types, complaining about not being able to get a band together. This was in the late sixties, after she’d broken up with the Stone Poneys—and all these men in the music business were dreaming of producing a hit album with her, something that would show off her incredible voice. And yet, despite her incredible voice, for a long time, well, she would do albums that weren’t hits, and so another producer would be a thing of the past.

Meanwhile, men like Hugh Hefner would be propositioning her with “Let’s just shoot you with no clothes on, why don’t we?” and casting directors were trying to interest her in movies.

“That’s not what I am, Eve,” she said, laughing and laughing. “Me with no clothes, imagine!”

When she wasn’t lying around reading or finding herself embroiled in some romance and isolated beyond phone calls, she was running around the Hollywood reservoir, taking aerobics at some gym, or otherwise endlessly battling her constant impulse to make chocolate cakes, brownies, or thick stews.

“But what about movies?” I said.

That was one thing about Linda: movies were absolutely too boring for her—if she wasn’t singing and on the stage, she preferred lying around reading The Wall Street Journal and adding to the piles of books stacked up in her living room.

She was sure that one day she’d get around to buying bookcases, but it wasn’t until I saw her house in Brentwood with built-in bookcases that I ever saw one of her living rooms not perilous with volumes you had to step over or around. When she wasn’t lying around reading or finding herself embroiled in some romance and isolated beyond phone calls, she was running around the Hollywood reservoir, taking aerobics at some gym, or otherwise endlessly battling her constant impulse to make chocolate cakes, brownies, or thick stews. Or going to Lucy’s El Adobe for the wrong kind of Mexican food or eating stuff like the papaya chicken at Nuclear Nuance.

Her favorite books in those days were political histories and F. Scott Fitzgerald’s Pat Hobby Stories. I kid you not. I mean, Linda is just your normal good-time overeater type of person, whereas Jane Fonda, as she mentions in her book, was a bulimic—one of those sneaky people who eat and eat and then throw up. And bulimia is not what I want in a politician at all. I want things to stay down. And I want Linda to sing a slow, sexy double-entendre version of “You’re Just Too Marvelous” to Gorbachev.

Anyway, we’ve missed Linda, stuck up there wherever she is with George Lucas, making brownies, and it was great to see her on the Grammys, looking so Rosarita-y and confident.

She certainly has my vote.