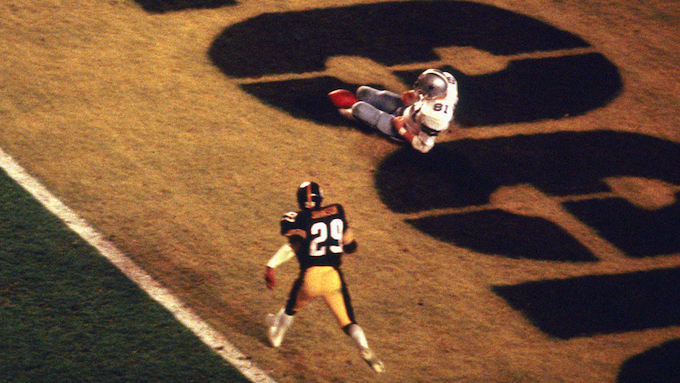 Darrell Smith sat there and listened quietly. What he heard hurt him, but he didn’t speak. He looked down at the floor. He fidgeted and fumbled with a small Instamatic camera he had brought to the game.

Six feet away, his dad, just out of the shower, stood nude.

And the sportswriters, dozens of them, swooped in immediately and stripped him even further.

“Will this play stand out in your mind 10 years from now?”

“Is this the biggest disappointment of your career?”

“What’s going through your head?”

“Do you think you cost Dallas the game?”

“Tell us about it again, will you?”

“Will you watch the play on films?”

For 45 minutes, Jackie Smith, the veteran tight end of the Dallas Cowboys, stood in front of his Orange Bowl dressing room stall and took it. It hurt him. It hurt his 14-year-old son.

The biggest heartbreak of the game for Dallas had come with 2:30 left in the third quarter.

The Cowboys, trailing 21-14, had a third-down-and-three-yards-to-go situation on the Pittsburgh 10-yard line. Using a run offense (double tight ends), Dallas completely fooled Pittsburgh’s defense. Smith slipped into the end zone and stood there all alone as Cowboy quarterback Roger Staubach floated a pass a bit low to him. It looked like a sure touchdown. But Smith slipped just as he was about to make the catch, and the ball bounced off his hip pad and fell harmlessly onto the painted grass of the end zone.

An incredulous gasp arose from the Dallas fans. Their Pittsburgh counterparts went berserk. And Jackie Smith sat there in the end zone, stunned.

The field goal unit came in and Smith walked off.

Super Bowl XIII was to be the ultimate reward for Smith.

A month shy of 39, he was the oldest man on the field yesterday. He had toiled so long and so well over the years for the St. Louis Cardinals that Cowboys owner Tex Schramm had guaranteed Smith was “surefire Hall of Fame” material.

No tight end in the history of pro football has caught more passes (483) or gained more yards on receptions (7,956) than Jackie Smith. But in his 15 seasons with the Cards, he never made it to the pinnacle of his profession.

So after last season, he retired. A Cardinal doctor had warned him that he would risk paralysis if he kept playing with the nagging neck injury he had had for two seasons. When the St. Louis pre-season camp opened this year, Smith wasn’t there. He was with his son in the mountains of New Mexico.

“My Boy Scout troop went on a 100-mile hike in the mountains and my dad went along,” Darrell said yesterday. “When he was playing with the Cards, he never got any time with us. While we were up there, I asked him if he wished he was back with the Cards and he said, ‘No,’ but I’m sure he missed it.

“But when we got back, he still took his physical. They said he flunked it.”

So Smith busied himself in civilian life. He sells real estate. He has a restaurant and bar in St. Louis called “Jackie’s Place.” And he planned to move his family into the country, where Darrell said they are going to raise horses on 20 acres.

Two clubs called Smith to see if he’d be interested in playing with them. He didn’t even return their calls. If he was going to come back to football this year, it was either going to be with the Cards or a club he felt was a sure contender.

“Then, one night, dad called me from the restaurant,” Darrell said. “He was excited. He said he had just gotten a call from coach Landry. I thought he was kidding. I laughed, but the next day he was on the plane to Dallas.”

The Cowboys needed a replacement for Jay Saldi, who had broken his arm. They felt Smith was the best of the crop of free agents available. After all, a year ago, Smith caught the touchdown pass that enabled the Cardinals to beat the Cowboys. Smith passed the physical and joined the club in early October before the first Washington game.

“I was worried when I first came to the Cowboys,” Smith said. “I didn’t know if I could get in shape. I didn’t know how I’d be accepted. I was thinking I might have overloaded myself.”

Smith caught no passes during the regular season, but he was often used when the Cowboys went to a two-tight-end formation. His blocking was still effective, so much so that after the Philadelphia game, he was presented the game ball. In the playoffs, he made three receptions including a touchdown catch in the Cowboys’ 27-20 victory over Atlanta.

After the Cowboys’ 28-0 NFC championship victory over Los Angeles, Smith said, “I looked around and I wasn’t with all those people, Irv Goode, Charley Johnson, Larry Wilson, I’d cranked up with all those years (in St. Louis). Those guys had worked just as hard as I had and they never had it happen. All those years, we’d come into camp saying this will be the year and all we got was frustrated. I had gotten so I almost hated this game (Super Bowl) because we worked so hard. Now it didn’t seem fair that I was the lucky one.”

The game was an hour past and still the sportswriters and sportscasters pushed in around Smith. They pushed past his son, bumping him, not knowing who he was.

Two writers would leave and four would fight to squeeze into the vacant spot. They stuck their notepads and microphones in Smith’s face. They stepped on his towel. They’d ask the same questions over and over.

One sportswriter, pushed from behind, began to slip. He tried to brace his fall with his hand. As he did, he brushed his felt tip pen across Smith’s back, leaving a black streak of ink on a shoulder blade.

And Jackie Smith stood and took it.

“I was wide open and I just missed,” he said. “It was a little behind me, but not enough that I should have missed the ball. Hell, the coverage had left. I tried to get down. I was trying to be overcautious. On a play like that, you want to get it in your hands and pull it close to your body. My left foot got stuck and my hip went out from under me.”

“Did you take your eye off?” a reporter asked.

He sat down. He didn’t focus on his interrogators. The crow’s feet around his eyes made his face look tired. He pulled on his brown pants and his fancy tooled cowboy boots.

Across the dressing room, Staubach spoke of the same play.

And Jackie Smith stood and took it.

“I saw him open and I took something off it. I didn’t want to drill it through his hands,” he said. “The ball was low. It could have been better. Chalk that one up to both of us.”

Before yesterday’s game, Smith was not quite sure whether he’d play again next season or not.

Last night, he had decided.

“I’ve decided that I don’t want to try it again,” he said. “I was looking to get away from it last year. It takes a while, but I thought I had done it and then everything got regenerated again. I hate for it to end like this. It’s part of what you do when you play the game. It’s from the intensity. You have a lot of good times and a lot of bad times. I hope it won’t haunt me, but it probably will.” His voice trailed off a bit. “I’ve still got what I’ve done, who I’ve met, but I hate going out like this. All these years, all the wait, and this is what they’ll remember.”

He was fully dressed now and had withstood the barrage.

“I’ve had about all I can take now,” he said quietly to a friend.

He picked up his belongings and excused himself from the new wave of reporters who were still probing away. He walked over to his son, tapped him on the head and said, “Let’s go.”

The two got to the locker room door, but before Smith got out, a sportscaster with a little tape recorder shoved a microphone up into his face and blurted, “I hate to bring this up, Jackie, you’ve probably answered it already, but why did you drop that pass?”