The Challenger and the Muslims 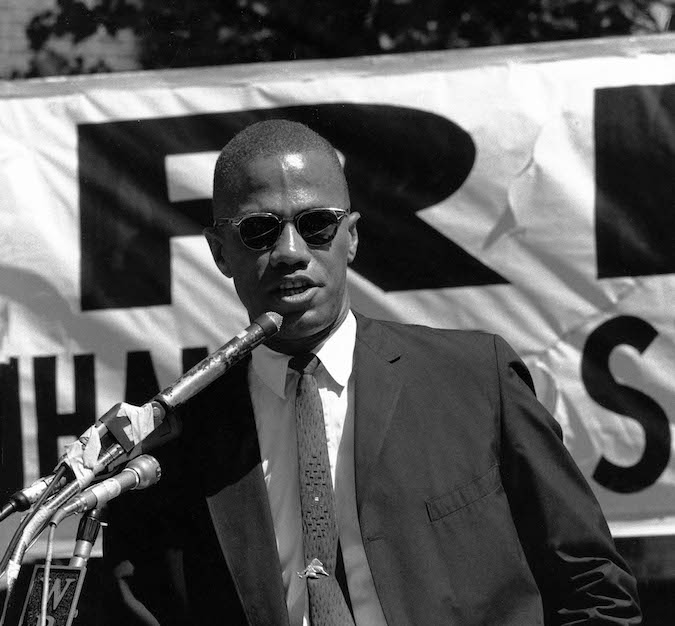 When he was 18 years old, just an amateur fighter with almost no reputation outside his native Louisville, Cassius Marcellus Clay came to New York and, on the corner of 125th St. and Seventh Ave, by the Hotel Theresa, watched a man get up on a soap box and tell everybody that white people were no good.

Clay came back to Harlem this week. He slipped away from his training camp in Miami, where he is getting ready to fight heavyweight champion Sonny Liston, and he flew to New York. He didn’t bother telling his trainer, Angelo Dundee, where he was going. He came to New York with a companion and with a reason.

His companion was a man named Malcolm X. His reason was to address a Black Muslim rally.

And on Tuesday night, in the Rockland Palace Ballroom on 155th St. near Eighth Ave, in the shadow of the Polo Grounds and the Macombs Dam Bridge, Cassius Clay got up and made a speech to the Muslims, the fiercely nationalist religious sect which advocates a separate Negro state.

Only Muslims were invited to the meeting, and Muslims, understandably, do not like to reveal who is present or what is said at their sessions. But Robert Joseph, who identified himself as the manager of the Rockland Palace, confirmed Clay’s presence—and the nature of the meeting.

“Muhammad Mosque No. 18,” Mr. Joseph said, when he picked up the phone at the Rockland.

The brash young boxer, who celebrated his 22d birthday last week, may not be a card-carrying Muslim. But, unquestionably, he sympathizes with Muslim aims and, by his presence at their meetings, lends them prestige.

Only sketchy reports of the meeting leaked out. According to one source, Clay was serious, even dignified. He talked about Sonny Liston and about himself, and in a poem, he pointed out that while he was training among Negroes in Miami, Liston was training among whites in Las Vegas.

“I’m convinced,” said one man who attended the meeting, “that Clay is definitely a member of the Black Muslim group.”

The brash young boxer, who celebrated his 22d birthday last week, may not be a card-carrying Muslim. But, unquestionably, he sympathizes with Muslim aims and, by his presence at their meetings, lends them prestige. He is the first nationally famous Negro to take an active part in the Muslim movement. Yet he still has not formally announced support for the Muslims.

He will not discuss the subject publicly. He will talk about his punches and his speed and his good looks, but he will not talk about the movement.

He earns his keep now partly by shielding Clay and Clay’s Muslim activities from reporters. It seems strange that the Muslims want to keep Clay’s association with them a secret. But one theory is that Clay intends to turn part of his purse from the Liston championship fight over to the Muslims, and he prefers not to reveal his connection until after the fight.

“I heard ’bout Clay and the Muslims a month ago,” Sonny Liston says. “Don’t make no difference to me. I don’t mess with his personal affairs, he shouldn’t mess with mine. But tell him I got it in the contract that the fight can’t be shown in no theaters where they don’t let Negroes in to see it.”

Clay’s association with the Muslims is no secret among the people close to him. One friend who visited the Clay training camp in Miami says that the quarters reflect Muslim morality—both profanity and drinking are barred.

William Faversham, Jr., the chairman of the Louisville syndicate which backs Clay, knows that his fighter had as a visitor this past week Malcolm X, the top Muslim in New York. Malcolm X, his friends say, went to Miami with his wife for his first vacation in nine years. Supposedly, Clay paid for Malcolm X’s five days in Miami, but the fighter neither confirms nor denies this.

Since his particularly ill considered remark about President Kennedy’s assassination, Malcolm X has been forbidden—by Elijah Muhammad, the national Muslim leader—to make any public statements. “Malcolm won’t say anything publicly,”’ says an acquaintance, “and the one subject he won’t talk about even privately is Cassius Clay.”

“Cassius goes to a lot of meetings,” says Bill Faversham. “He has a natural curiosity. But he’s a fine young man. He does some wonderful charity work with children. I don’t know that he’s a Muslim. I do know that he has gone to their meetings. Every man has a right to his own political faith and his own religion.”

Clay’s first brush with the Muslim movement was on that street corner in Harlem three-and-a-half years ago. His interest in the organization revived two years ago when he started attending Muslim meetings in Miami.

The first time he went with two St. Louis Cardinal baseball players, Bill White and Curt Flood. All three went out of curiosity, but White and Flood walked out after a few minutes. It was too extremist for their tastes. But Clay, who is as impressionable as he is talkative, lingered on. “I dig them cats,” he once said.

Clay is best known now for his poetry and for his bragging—he has won all of his nineteen fights, fifteen of them by knockouts, often predicting the exact round in verse—but he can be, when he is not sounding off, a personable, warm young man. He likes to have people around him, and it is conceivable that the Muslims attracted him because they provided lively meetings and lively conversation.

If Clay shares the anti-white sentiments of the Black Muslims, he has always disguised his feelings well. The only hate he ever exhibits outwardly is for his opponents, and that, despite Clay’s boastful lyrics, always shows through as false hate.

Clay’s romance with the Muslims may be a fleeting thing, and it is unlikely to have any damaging effect on his career. It might even be beneficial for the gate of his Feb. 25 fight with Liston. Some spectators may be attracted by the hope of seeing Clay defeated, and Sonny Liston, of all people, will be cast in the strange role of hero.