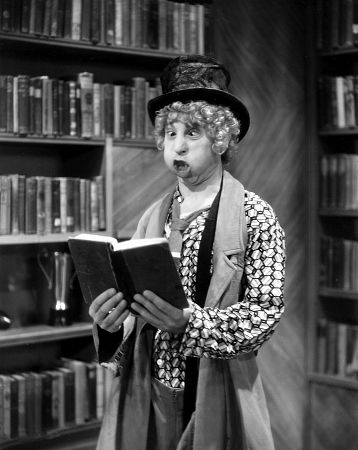 The origins of “The Gookie,” from one of the great showbiz memoirs, Harpo Speaks!

The man who first inspired me to become an actor was a guy called Gookie. Gookie had nothing to do with the theatre. He rolled cigars in the window of a cigar store on Lexington Avenue.

This was the store with card games and bookmaking in the back room, the nearest thing to a social club in our neighborhood. It was Frenchie’s home away from home and, along with the poolroom, Chico’s too. Since gambling was never the obsession with me that it was with Chico, I didn’t spend much time in the back room. Where I had the most fun was on the street, in front of the store.

Gookie worked at a low table, facing the Avenue through the window. He was a lumpy little man with a complexion like the leaves he used for cigar wrappers, as if he’d turned that color from overexposure to tobacco. He always wore a dirty, striped shirt without a collar, and leather cuffs and elastic armbands. Whether he was at his table in the window or running errands for the cardplayers, Gookie was forever grunting and muttering to himself. He never smiled.

Gookie was funny enough to look at when he wasn’t working, but when he got up to full speed rolling cigars he was something to see. It was a marvel how fast his stubby fingers could move. And when he got going good he was completely lost in his work, so absorbed that he had no idea what a comic face he was making. His tongue lolled out in a fat roll, his cheeks puffed out, and his eyes popped out and crossed themselves.

I used to stand there and practice imitating Gookie’s look for fifteen, twenty minutes at a time, using the window glass as a mirror. He was too hypnotized by his own work to notice me. Then one day I decided I had him down perfect–tongue, cheeks, eyes, the whole bit.

I rapped on the window. When he looked up I yelled, “Gookie! Gookie!” and made the face. It must have been pretty good because he got sore as hell and began shaking his fist and cursing at me. I threw him the face again. I stuck my thumbs in my ears and waggled my fingers, and this really got him. Gookie barreled out of the store and chased me down the Avenue. It wasn’t hard to outrun such a pudgy little guy. But I’ll give Gookie credit. He never gave up on trying to catch me whenever I did the face through the window.

It got to be a regular show. Sometimes the guy behind the cigar store counter would tip off the cardplayers that I was giving Gookie the works out front. When they watched the performance from the back-room door and he heard them laughing, Gookie would get madder than ever.

For the first time, at the age of twelve, I had a reputation. Even Chico began to respect me. Chico liked to show me off when somebody new turned up in the poolroom. He would tell the stranger, “Shake hands with my brother here. He’s the smartest kid in the neighborhood.” When the guy put out his hand I’d throw him a Gookie. It always broke up the poolroom.

I didn’t know it, but I was becoming an actor. A character was being born in front of the cigar-store window, the character who was eventually to take me a long ways from the streets of the East side.

Over the years, in every comedy act or movie I ever worked in, I’ve “thrown a Gookie” at least once. It wasn’t always planned, especially in our early vaudeville days. If we felt the audience slipping away, fidgeting and scraping their feet through our jokes, Groucho or Chico would whisper in panic, “Ssssssssssst! Throw me a Gookie!” The fact that it seldom failed to get a laugh is quite a tribute to the original possessor of the face.

The little cigar roller was possibly the best straight man I ever had. He was certainly the straightest straight man. If Gookie had broken up or even smiled just once, my first act would have been a flop and the rest of my life might not have been much to write a book about.