The Summer in the City Game 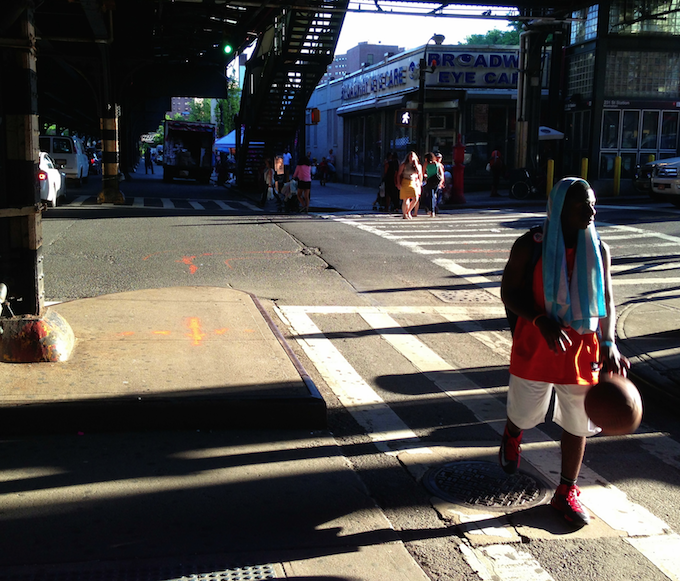 With all due respect to the national pastime, summer is also time for hoops, especially of the pick-up variety. Of course, in the realm of basketball literature there is a whole rich subsection of writing devoted to the street game. We’ve got a couple few gems for you, starting with “Gravity’s Outlaw”, Peter Goldman’s sterling 1978 Sport magazine profile of New York schoolyard legend, Earl “The Goat” Manigualt:

He was the Outlaw of Gravity—a dazzling schoolyard skywalker who seemed innocent of the knowledge that what goes up must come down. Or maybe he was just scared to obey. It was only on the ground that The Goat ever got in trouble, paying his dues to Isaac Newton, and last summer the ground got him again—caged him up in the Bronx House of Detention on weapons and drug charges that he denied but despaired of beating. He turned 32 there a while ago, suited up as usual all day in cutoffs and sneaks for the meager hour’s basketball time they allow you up on the roof. Otherwise, Gravity’s Outlaw lay earthbound on Tier Four-West, smiling his I’m-sorry smile, showing around his thumb-worn chapter in Pete Axthelm’s book The City Game, living like a Romanov prince-in-exile on his faded glories.

Manigault was nearly unknown to established basketball when Axthelm first bore his legend downtown from Harlem in 1970, and when the ABA’s Utah Stars finally gave him a shot at the pros, he was too wasted by time and heroin to cash in. But the legend endures in the streets even now. Earl himself offers mildly that to produce his clone, you would need cells from Earl Monroe and Julius Erving—“the Pearl’s ground game,” he says, “and the Doctor in the air.” This view is widely shared among eyewitnesses, who still count Manigault as the most creative basketball player of his day. “He played like a book illustration,” says a Harlem contemporary, Buck Blakley. “You don’t teach his sort of moves, but if you did teach ’em, you’d have to get Earl to do it.”

His game was moves and impossible to quantify, even if statistics had been kept on playgrounds; it was all written on the wind, like riffs in jazz, and it sometimes gets magnified in the retelling. It is said, for example, that The Goat in his prime could snatch a quarter off the top of a backboard and make change coming down. He couldn’t, as he cheerfully admits; the best he could manage was plucking a crumpled paper cup out of the highest hole in a tin schoolyard board—six inches below the top. That he may thus have been a hand’s-breadth away short of his folk reputation troubles Harlem not at all. It is remembered there that Earl, at 6 feet 2, jumped center against giants and always got the tap; that the twisting slamjammer known now as the “360” was then called “the goat” in his honor; that on those rare occasions when Kareem Abdul-Jabbar’s protective high-school coaches let him out on the asphalt, he liked to play on Earl’s side. 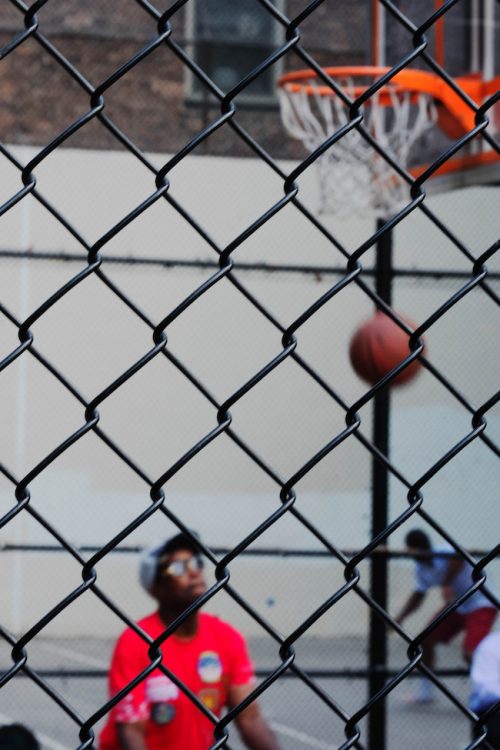 And from Ivan Solotaroff—who spent many hours on the city courts as a youth in the mean old days of the ’60s and ’70s—comes this 1992 profile on Lloyd Daniels and his coach, Jerry Tarkanian— “Swee’ pea and the Shark”:

Tarkanian should have known Daniels was trouble from the moment he laid eyes on him, back at a high school all-star summer tournament in Vegas in 1984. Even though Daniels, the youngest player in the game, was wasted (he thought he had to smoke a joint before each game to “keep the level up”), he commanded the court. As they watched the ninth grader dominate, Bernie Fine, an assistant coach at Syracuse, filled Tarkanian in on the Swee’pea legend—already in full bloom, though Daniels had played only seven games of freshman ball.

He was, essentially, an orphan. His mother died of cancer when he was three, and his father turned to drinking, abandoning his son to various relatives. At the age of seven, he taught himself the game, sneaking down to an unlighted park around the corner in East New York to shoot baskets at midnight—from so far out he couldn’t see the rim. He learned to shoot it off the backboard. By 1980, age twelve, his turnaround jump shot was automatic from fifteen feet, without looking, but he didn’t shoot it much. From the moment he was big enough to play with older kids, Daniels—who’d picked up the Swee’pea nickname because of his resemblance to the character in Popeye—had a gift for the pass. Others saw the court as a place to humiliate. Daniels saw it as a place to connect, probably for the only time in his life: Dish it off at exactly the right moment—“soft and pure,” as Tark says—and learn immediately who can be trusted with the offering and who has no game. Some people call it court vision. Bird had it. Magic had it. And many coaches regard Daniels as their equal in anticipating the next move of every player on the court. Daniels has a jazzman’s feel for the game’s improvisational nature as well. “When it builds,” he says, referring to the ebb and flow, “you nag it some till it gives. Then you drop it down. I always loved that. I couldn’t much explain why, though.”

And just cause, if you’ve never read Mark Jacobson’s killer 1985 profile of Dr. J—just g’head and treat yourself:

Everyone, every serious hoop fan certainly, remembers the first time he saw Julius Erving play basketball. Perhaps my grandfather, a great New York Giants baseball fan, got the same feeling the first time he ever saw Willie Mays go back on a fly ball. I hope so. It was as if a Berlitz beam had zapped, wholesale, an alternative mode of expression into the brain. There was Julius, mad-haired and scowl-faced, doing what everyone else did, rebounding, scoring, passing, but doing it with the accents shifted from the accepted but now totally humdrum position to a new, infinitely more thrilling somewhere else. Who was this man with two Jewish names who came from parts unknown with powers far greater than the mortal Trailblazer’s? Flat out, there was nothing like him. No one had ever taken off from the foul line as if on a dare, cradled the ball above his head, and not come down until he crashed it through the hoop. Not like that, anyway. Julius acknowledges a debt to Elgin Baylor, whom he calls “the biggest gazelle, the first of the gliders,” but, to the stunned observer, the Doctor seemed to arrive from outside the boundaries of the game itself. His body, streamlined like none before him, festooned by arms longer and hands bigger, soared with an athletic ferocity matched only by the mystical, unprecedented catapult of Bob Beamon down the Mexico City runway, or by the screaming flight of Bruce Lee.

…Has any other individual in team sports radically altered the idea of how his particular game should be played to the degree Julius has? Jackie Robinson? Babe Ruth? Jim Brown? A better comparison would be someone like Joe DiMaggio. DiMaggio was impeccable, the nonpareil. He was simply better. Yet there is something hermetic about Joe DiMaggio, about being simply better; it is to be admired, but it doesn’t offer a whole program of reform. Perhaps Julius cannot be credited with inventing the slam dunk, or the finger roll, or the hanging rebound—the entire airborne game in general. But he certainly popularized it.

…Befitting the matter-of-factness of a legend discussing his craft, Julius is not falsely modest about his contributions to the game. In the clinical fashion he employs when delineating the x’s and o’s of his profession, he says, “I’d say I’ve had an effect in three main areas. First, I have taken a smaller man’s game, ball handling, passing, and the like, and brought it to the front court. Second, I’ve taken the big man’s game, rebounding, shot blocking, and been able to execute that even though I’m only six foot six. What I’ve tried to do is merge those two types of games, which were considered to be separate—for instance, Bill Russell does the rebounding, Cousy handles the ball—and combine them into the same player. This has more or less changed the definition of what’s called the small forward position, and it creates a lot more flexibility for the individual player, and, of course, creates a lot more opportunities for the whole team. The third thing I’ve tried to do, and this is the most important thing, is to make this kind of basketball a winning kind of basketball, taking into account a degree of showmanship that gets people excited. My overall goal is to give people the feeling they are being entertained by an artist—and to win.”

Then Julius laughs and says, “You know, the playground game … refined.” 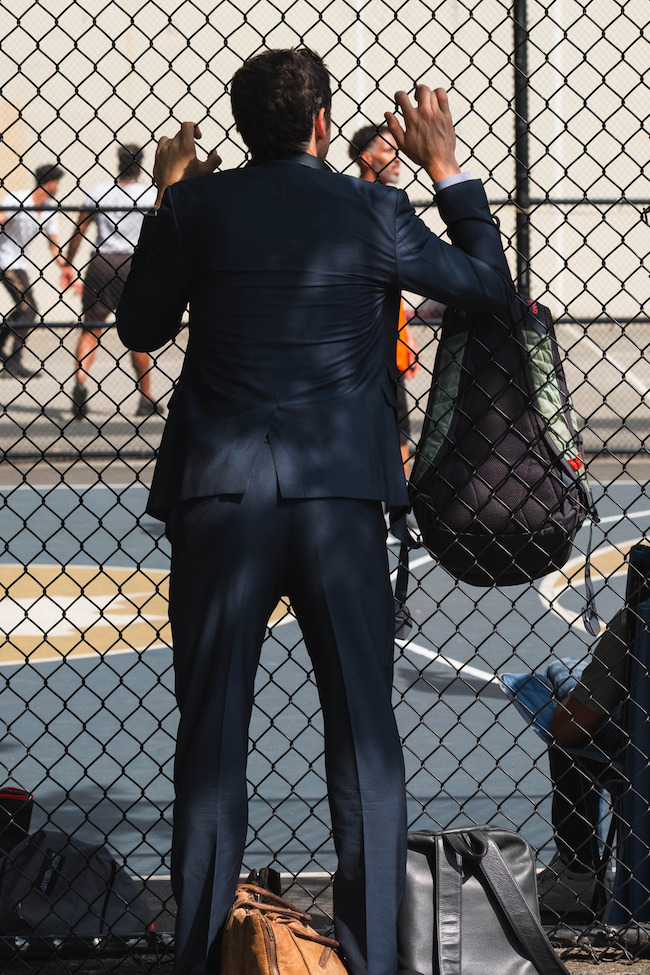