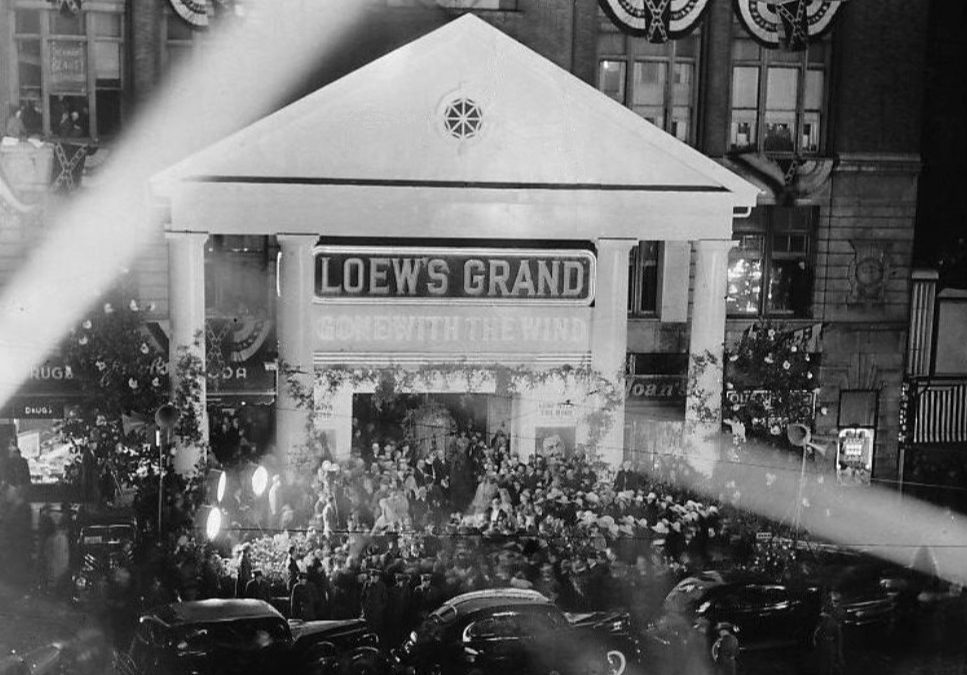 The most telling news to come out of Atlanta during the days leading up to the opening ceremonies of the centennial Olympic Games had nothing to do with the erection of a 165-foot-tall statue of a Coca-Cola bottle—in a city of fizzy promotional excess, a predictable event. Rather, it was the near destruction, evidently by arson, of a nondescript apartment house at 17 Crescent Avenue in the midtown section. It was at this address 70 years ago that a former Atlanta Journal Magazine writer—wearing an old-fashioned green eyeshade and toiling at a Remington typewriter—began pounding out the novel that for so long determined how people around the world perceived Atlanta. The writer, of course, was Margaret Mitchell, and the novel was Gone With the Wind.

Now, on architectural merits alone, the house on Crescent Avenue was never much. Shortly after moving in, Mitchell christened her apartment the Dump, and over time, things only got worse. By the early nineties, some 40 years after Mitchell’s death, the place had become a decaying hulk. Still, the fact that the big book was written here generated a certain aura, and following a fund-raising drive, the Mercedes-Benz people—hoping to score public-relations gold—agreed to spend a hefty sum for restoration just in time for the Olympics. This is where cabbies were to have dropped tourists seeking Tara, pilgrims for whom the well-packaged brand of southern hospitality served up by everybody else in town wouldn’t be enough.

In short, it was at a gussied-up 17 Crescent Avenue that the Olympic city was going to make a formal bow to the Old South. And if there never was a Tara, if, in fact, Mitchell meant Gone With the Wind to function as a blueprint for modern Atlanta—a point she explicitly brought home when Scarlett O’Hara rejects the genteel Ashley Wilkes for that outrageous scalawag Rhett Butler—well, as Scarlett said, fiddle-dee-dee. Here’s where visitors weary of the high-tech gizmos displayed around Centennial Park—the shrine to marketing residing at the Olympics’ core—could have conjured visions of lads in Confederate gray, girls in hoop skirts, and, yes, Big Sam and Mammy. But it wasn’t to be. The building is a charred ruin. Not that anyone in town except Gone With the Wind fans shed tears.

The truth is, today’s Atlanta—despite the fact that it was the spiritual capital of Dixie—has little use for its past, especially those parts of it depicted in Gone With the Wind. If New Orleans is the city that time forgot, Atlanta is the city that forgot time. To Atlanta’s integrated elite, the Dump, despite its drawing power, is the site from which a politically incorrect myth arose, a myth, in a phrase, that is not just history but the wrong history. The only history folks around here can now agree on began in recent memory, and while this attitude has set the city free, it has also un-tethered it from its foundation.

Thus sojourners at Atlanta’s 1996 games find themselves in a place whose leaders behave as if it weren’t founded until say, 1967, when John Portman’s Hyatt Regency Atlanta (the one with the atrium) opened, or finished until a few days ago, when workers put the last paint on the venues. During that nearly 30-year span—roughly a generation—the modern metropolis that prides itself on its financial acumen and racial comity was born. Its principal article of faith, preached both in corporate boardrooms and from black pulpits, is that what’s good for business is good for the ‘hood. “Enlightened self-interest,” the city’s brave new oligarchy calls it, and while that might sound like a contradiction, the results appear to speak for themselves.

The downtown Atlanta skyline is what Atlantans point to most often when showing off evidence of the town’s prosperity, and with the de rigueur towers by Johnson-Burgee and Skidmore, Owings & Merrill, it is indeed almost impressive, especially after dark. But in the light of day, there’s clearly something missing—a stock of venerable buildings that might create not just urban context but a link to a now-lost city. Not long ago, there were plenty of such structures. Terminal Station, a Moroccan fantasy that was historically and stylistically significant, was bulldozed in the seventies. Also razed that decade was the Loew’s Grand Theater, where in 1939 the movie version of Gone With the Wind premiered. In the eighties, then-mayor Andrew Young, one of the men who lured the games to Atlanta, crystallized the city’s attitude toward preservation when he referred to the Castle, a magnificent old house facing the wrecking ball, as a “hunk of junk.” The Castle, as it turned out, was saved, but Young’s sentiment prevails.

The eternal flame that burns at the tomb of Martin Luther King, Jr. is Atlanta’s universally accepted landmark. It commemorates the great fallen martyr and bespeaks the city’s victory over segregation. Here again, though, much as locals like to brag on King and congratulate themselves for overcoming, there’s another side to the story. In 1903, Atlanta instituted sweeping Jim Crow laws, and in 1906, it was the site of one of the worst race riots in American history—a clash every bit as bloody as the one that took place in Los Angeles in 1992. Furthermore, the only Atlanta native to be elected governor of Georgia in recent history—and if you hear his name breathed during the Olympics, call security—is Lester Maddox.

That contemporary Atlanta has tried to put such distance between itself and its past—and as a result a lot of people attending the Olympics or watching on TV may come away from the city feeling that for all its gleaming surfaces, it lacks depth – stems from a singular fact and a couple of related responses to it.

The fact is that Atlanta is the only major American city ever destroyed by war. When General William Sherman’s troops torched the town in 1864, they left very little. And what they did leave—save for a nexus of railroad lines—was quickly abandoned by the wily people who remained.

Atlanta’s obsession is with its image, and a lot of very real problems—corruption in the police department, crime, a declining tax base—get short shrift.

Modern Atlanta arose out of the ashes in 1886 when Henry W. Grady, managing editor of The Atlanta Constitution, went to New York and delivered a speech entitled “The New South” to the New England Society. In the address, Grady spoke of a “brave and beautiful city” that welcomed Yankees, boasted low interest rates, and forgave Sherman, even if he was “a kind of careless man about fire.” It was a shameless and persuasive act, and ever since, Atlantans have been heading north—or anywhere else on the compass where folks could be separated from their wallets—to give a version of the talk. Indeed, when Billy Payne, president of the Atlanta Olympic Games, sold organizers on the idea that the mean temperature in July in this notoriously hot and humid city is a pleasant 79 degrees, he was channeling Grady.

The saving grace of Atlanta boosterism is that along the way, it was put to progressive ends. “The city too busy to hate,” Mayor William Hartsfield famously decreed back in the fifties. Part hope, part hokum, the slogan provided cover for the coalition of white financiers and black activists who steered Atlanta through the volatile sixties, keeping it from becoming, as the local saying goes, another Birmingham. A great achievement, this, but if not Birmingham, what then did Atlanta become?

The temptation is to declare that by dint of hosting the Olympics – an extravaganza that is in many ways the world’s greatest convention—Atlanta has earned the right to call itself the world’s greatest convention town, a collection of hotels and arenas designed to dazzle many and offend no one. This is where, in a sense, it has long been headed. It’s why, several years back, Cain Street—a downtown thoroughfare commemorating a founding father—was blandly renamed International Boulevard. It’s why, around the same time, Forrest Avenue, a byway honoring Nathan Bedford Forrest, founder of the original Ku Klux Klan, was renamed for Ralph McGill, the Constitution’s courageous, Pulitzer Prize-winning editor during the civil rights movement.

Atlanta’s obsession in other words, is with its image, and as a consequence, a lot of very real problems—corruption in the police department, crime, a declining tax base—get short shrift. Nobody wants to tarnish the pretty picture.

In his extraordinary The Souls of Black Folk, written in Atlanta in 1900, W.E.B. DuBois proclaimed:

“South of the North, yet North of the South, lies the City of a Hundred Hills, peering out from the shadows of the past into the promise of the future … Atlanta, Queen of the cotton kingdom; Atlanta, Gateway to the Land of the sun … And the Nation talked of her striving.”

Nearly a century later, the striving continues, but to what end? Can a city too busy to hate be too busy to be great? Conceived by fire from without, and now validated by the flame of the Olympic torch, Atlanta must ultimately illuminate itself from within. The only source for such light is its past, the uncomfortable ambiguities notwithstanding.

Meanwhile, it turns out the restoration project at 17 Crescent Avenue was insured. The Dump will be rebuilt.