Elvis Costello is Angry and Convincing 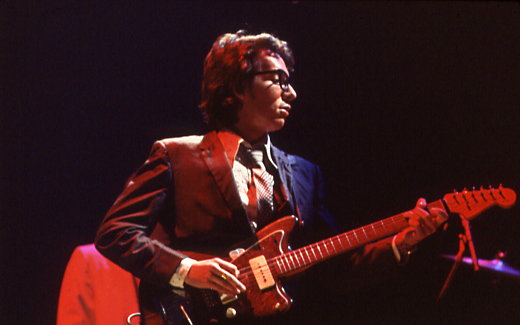 It’s 1:30 am in the Bootlegger Lounge in Syracuse, N.Y. Elvis Costello, the one with the owlish stare and the spitting mad vocals, the man whose songs may be the worst thing that’s happened to feminism since Jack the Ripper, is leaning solicitously towards an elegant brunette in a low cut black dress.

Around the corner is the Landmark Theatre, a rococo movie palace where Elvis had berated and rocked a full house into a frenzy two hours before. He had run through some of the nastier cuts from his second Columbia album, This Year’s Model, ending with a bellowing encore version of “I’m Not Angry” from last years debut, My Aim Is True. “There’d better be some movin’ around,” Costello had threatened, and he was getting some. He was making the crowd—“Citizens of Syracuse,” he’d called them—shout out the last word of the song’s refrain. Five, six, ten, twelve, thirteen, fourteen, more times, till nobody was counting as Elvis shook his fist.

Straightjacketed in a gabardine sportscoat and black shirt, running through the manual of arms with his guitar as he leaned over it to throttle the mike, dropping to his knees on “You Belong To Me,” Elvis was earning his money. Not that he had to—his first record sold over 300,000 copies, and This Year’s Model is well on its way to eclipsing it. But his present U.S. tour, which has just finished up on the West Coast after a clockwise sweep through the country, is vindication for Elvis and his producer—fellow-performer Nick Lowe. And they are making sure to stuff their brand of rock ’n’ roll deep into the U.S. craw.

“It’s kind of fun,” says Lowe of their new visibility, “Because just a few months ago people wouldn’t have pissed on us if we were on fire; they thought we were losers, you know, but we just stuck at it.”

Backstage before Elvis’ set, there was none of the wrath and bashing that one has heard about; Lowe and British rocker Dave Edmunds are leaning back after a hard-driving set, and Elvis is a still centre of concentration, writing a song list on a napkin, as his band (The Attractions) jive and uncap beers. Though he peers about amiably enough, half-grinning as his manager Jake Riviera impersonates a TV news personality they call “Horrendo,” Elvis opens his mouth only once in 20 minutes. Organist Steve Nieve (a classically-trained 19-year-old whose Vox Continental organ sound stokes the band) has bought a fancy shirt, and is taking abuse for it. “Must be overpaid,” says Elvis, effectively deadpan.

Elvis’ reclusive nature has kept biographical details scant. Said to have been born in London as Declan Patrick MacManus, raised in Liverpool as a Catholic, Costello is 23, and has a son, 3, from a marriage at the age of 19. Shortly before his discovery and subsequent induction into the star-making machinery of Columbia Records, Costello was still working as a computer operator at a division of Elizabeth Arden Cosmetics. For a spell, as D.P. Costello, Elvis fronted a country-rocking band called Flip City (His father, as the story goes, was a band-leader.) In a boozy interview with a British writer, Costello made a statement that has caused more than a ripple of interest in his way-overgrown cult: “The only two things that matter to me, the only motivation points for writing these songs, are revenge and guilt.”

This Year’s Model reflects that, and the onstage Elvis puts the lyrics across even more heatedly than the recorded one. In Syracuse, he delivered a series of indignant stabs at womankind. “This Year’s Girl,” for example, feels like a ride on a carousel that’s slipped its drive chain as Elvis excoriates Farrah Fawcett-Majors types: “See her picture in a thousand places/Cause she’s this year’s girl … You see yourself rollin’ on the carpet with this year’s girl … ”

Elvis does his countrified quickie-single, “Stranger In The House,” and manages to leave tear stains all over the stage on which he has just belted “(I Don’t Want To Go To Chelsea.”

“Sometimes I think that love is just a tumor,” sings Elvis on “Lipstick Vogue,” as he spreads his fingers across his chest, “You’ve got to cut it out.” He flings his hand sideways, a gesture as abrupt as one he makes later—flipping the bird to a cheering audience.

For all the adoration that pours over him, Elvis still seems to work off the nasty half of a love-hate relationship with crowds. Playing the Whiskey in L.A., Elvis got perturbed by a heckler who was part of a milling pack just below the stage. He poured a glass of coke on the offender’s head, and, getting a splash of beer in return, smashed the glass on his mikestand and wiggled it before him. Not exactly your “It’s-really-great-to-be-here” routine.

“But the fact is,” says Columbia A&R Director Gregg Geller, “He’s a very young, unassuming, talented person who’s still learning how to handle all this attention. We certainly succeeded in creating a kind of mystique about him, and since he responds to audience response at his best shows, he tends to taunt them. He can be kind of pleasantly antagonistic.”

Nick Lowe, whose own Pure Pop for Now People is a fascinating exercise in alluring production styles, recalls the time when Elvis was searching—without much luck—for a label. “He’s very bitter and twisted about it. He had to go around making a prop of himself in people’s offices. I mean, going around playing his songs to people who know nothing about music, people who took one look and thought, ‘This guy, I can’t sell this bloke.’ ”

Nick met Elvis when the latter was a fan of the Brinsley Schwarz band, in which Lowe played bass. “He even roadied for us for a while,” says Lowe. It was Nick who steered Elvis to Jake Riviera at the newly-formed Stiff Records (the three now work from a new Riviera-centred outfit called Radar Records) and who helped break him. Two essentials—clever production and clever management—insured that Elvis would get the audience he deserves. A brash move—playing live and loud in front of the London hotel where CBS International held a convention—resulted in Elvis’ US distribution deal with Columbia. Raw talent, hard touring, and expert promotion did the rest.

Elvis Costello, then, is definitely this year’s model for a rock star. Tougher than punk, more touching than MOR, a better beat than disco—and all with integrity. The kind of integrity that approaches rage, and makes for crashing, cathartic rock ’n’ roll concerts. Sitting in the dark bar in Syracuse, Elvis is apparently talked out. He launches out of his chair like a banty rooster trying to fly, gives one of his electric, swivelling gazes around the bar, and heads out—hand in hand with his future.