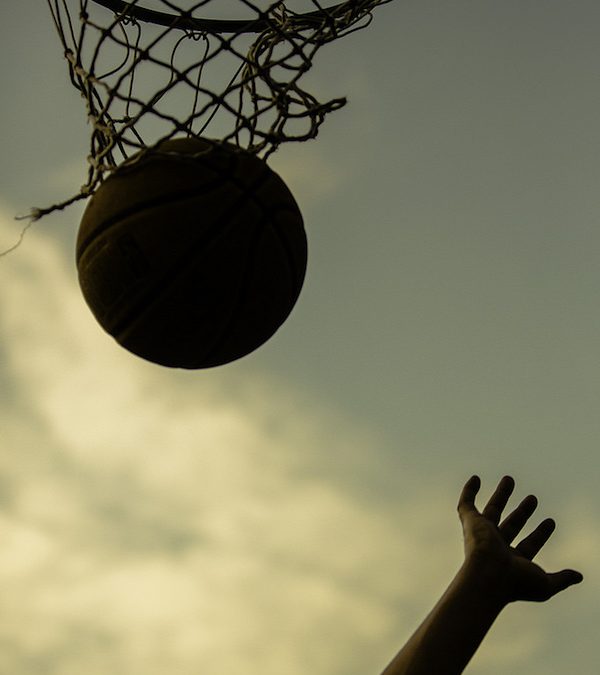 Little Looie has his recruiting budget for the year spread out in front of him in little piles—100 subway tokens, 50 bus transfers, and two $5 gift certificates from Orange Julius.

He’s on the phone, talking to his co-captains for next season: Solly “Rat” Pizzaroni, a half-Jewish, half-Italian point guard with boils on his neck, whose idea of a good time is drinking a six-pack of beer and then eating the bottles. Tough kid. And So-Sweet Cecil Robinson, a 6-foot-4, 150-pound forward who plays with a toothpick behind each ear and moves up and down the court like he’s being chased by a street gang.

They’re making plans to meet and Little Looie is giving directions. “You take the CC train to Utopia Parkway. Wait for the D bus, and take it to Union Turnpike. Then walk over to the deli on Avenue J. I’ll be in the back booth eating a turkey and pastrami on club.”

And right away you know we’re not talking about Montana.

St. John’s University (St. John’s, N.Y., on your top-20 AP and UPI weekly polls) plays its home basketball games at Alumni Hall, which is something less than a palace but nothing to be ashamed of. It holds about 6,000 people, and at any given time 4,500 of them have sons or cousins or good friends who play or played for the team. It’s a family place. Like McDonald’s, only the food’s worse. Little Looie Carnesecca, who coaches St. John’s and would probably sweep out the gym if they asked him to, thinks of Alumni Hall as his home.

“You take the CC train to Utopia Parkway. Wait for the D bus, and take it to Union Turnpike. Then walk over to the deli on Avenue J. I’ll be in the back booth eating a turkey and pastrami on club.”

“My blood is down there on that floor,” he says.

And if they’d wax it, they’d probably find his coat and his tie, too. Looie doesn’t so much coach a game as he orchestrates it. He scurries up and down the sidelines like a field mouse, barking instructions at his players and bellowing cross-examinations at the officials. Looie never sits in a chair, not since the time a few years ago when he sat down where he thought his chair was and ended up on his butt because his chair was in the stands, where he booted it 10 traveling violations earlier. You can lose weight just watching Looie coach. The only way to keep him reasonably close to his bench is to tie an elastic cord on his belt and jerk him back there on times-out.

“Before every game,” he says, “I tell my assistants to hold me down. Keep an eye on me. But I just get so involved in the flow of the game….”

Looie’s style is controlled chaos, and who can argue with his results? In seven years as head coach—he did split shifts taking off three years to coach and general manage the New York Nets—St. John’s has won 145 games and gone to seven postseason tournaments, three NCAAs and four NITs. Granted, St. John’s could go to every NIT from now to Doomsday because the Redmen sell more tickets than say, Lemoyne-Owen (Tenn.). Guaranteed that one of these years St. John’s will go to the NCAAs, and the NIT will list the Redmen as a tournament team anyway, figuring people will buy tickets because they won’t believe that there can be an NIT without St. John’s.

But seriously folks, let’s look at the numbers. In the past 69 years St. John’s has won 1,070 games, fourth best in in the nation. In the past 56 years the Redmen have had only two losing seasons, and since postseason tourneys began m 1938, St. John’s has been to more of them—seven NCAAs and 23 NITs—than any other school. Say what you want about the NIT (but don’t let the New York Post hear you); some pretty good teams have won that tournament. And four of them have been St. John’s.

“We’ve got a basketball tradition,” Looie says. “It’s embedded in the bricks here. You know how they breed the bulls for the ring? It’s the same thing here.”

“I beat him down the court once against Fordham,” Looie says. “He had a breakaway lay-up, but I was really moving.”

Not only great coaches and players, but such exotic names, too. St. John’s never gets your run of-the-mill Bill Smith. This year they’ve got one, and he comes with the nickname, Beaver. They get a common, ordinary Glen Williams, and he comes up from the Virgin Islands. Frankie “Flea” Alagia and Hernel Robertson are more like it. Carmine Calzonetti with the drive—yes, and it counts.

But let’s not paint too romantic a picture. St. John’s won’t be competing for a national championship in the near future. Even though the Redmen have New York City to draw from, they rarely get the superior blue-chipper they need to escape the NIT. The plain fact is that most city kids would rather leave the city as soon as it’s humanly possible. Cunningham, Hawkins. Archibald. Alcindor. Meminger. Grunfeld. King. The list goes on forever.

And since St. John’s doesn’t have any dorms to offer, Looie has to go after what’s left behind after the cream has whipped itself off to cleaner air. He’s a 50-cent subway token away from any playground in the city (except Staten Island—nobody plays any ball in Staten Island), and when he gets there, the pitch is always the overhand fastball. No sense in being subtle.

“If you’re a great player and you wanna be a pro,” Looie says, “this city is your stage. You’re gonna get to play in the Garden, the mecca. You’re gonna get the TV, the newspapers, the coverage. You go to a small town and 10,000 people will see you. You play here and 13 million people will know about you. Why do Jabbar and Erving and McGinnis want to play here? Because it’s the only place to play. And maybe one day in New York is more of an education than one month in any other city.”

St. John’s doesn’t have to prove anything to anybody. And anyway, who’s kidding who. You can’t sell the Brooklyn Bridge to a kid who grew up selling it to you. City kids grow up with enough street sense to smell a rat before it bites them.

Sometimes you eat the bear, and sometimes the bear eats you. Looie gets his share, but Wooden and Knight and Driesell and Smith and both McGuires get more. Looie’s teams have to win with hustle and guile. They have to scrounge like rats and dive for loose balls like winos dive for spare change on the Bowery. And even if they make it, sometimes nobody’s watching.

You got Nassau Coliseum to the east, and the Garden to the west. The Nets, the Knicks, the Islanders, the Rangers, the Metropolitan Opera, Broadway shows, first-run movies, the U.N., the Giants, the Jets, and more hookers than Idaho has potatoes. Fear city demands the best.

“You’ve gotta give it to them,” Looie says. “They expect it. We get newspaper men who cover the Knicks one night and St. John’s the next. You don’t con them. You play like dogs and they write about you like Gravy Train…. But the toughest place to make it is in your backyard; the biggest critics are your friends. You make it here, and you can make it anywhere. It’s a challenge.”

It’s a city day-hop school. The rest of the world thinks St. John’s is on Forty-second Street, but it’s really in Jamaica Estates, as pretty a place as there is in New York. You drive there, you bus there, you subway there, and you go home at night and your mama cooks you a good dinner. Nobody cons nobody. St. John’s doesn’t have to prove anything to anybody. And anyway, who’s kidding who. You can’t sell the Brooklyn Bridge to a kid who grew up selling it to you. City kids grow up with enough street sense to smell a rat before it bites them.

Little Looie knows all the angles. He’s up there every season with the giants, and all he can throw at them is the shrimps. Not bad for a guy from the East Side who could have been slicing salami at his old man’s deli.

And he sits in his office, surrounded by the split-pea green walls, talking about how much St. John’s means to him. It’s a 15-minute walk from his house, and every step of the way is like a stroll through his backyard. And as he talks about the future, he admits that there is one thing he’d like to do when all this basketball is over.

This story was first reprinted at the Daily Beast.