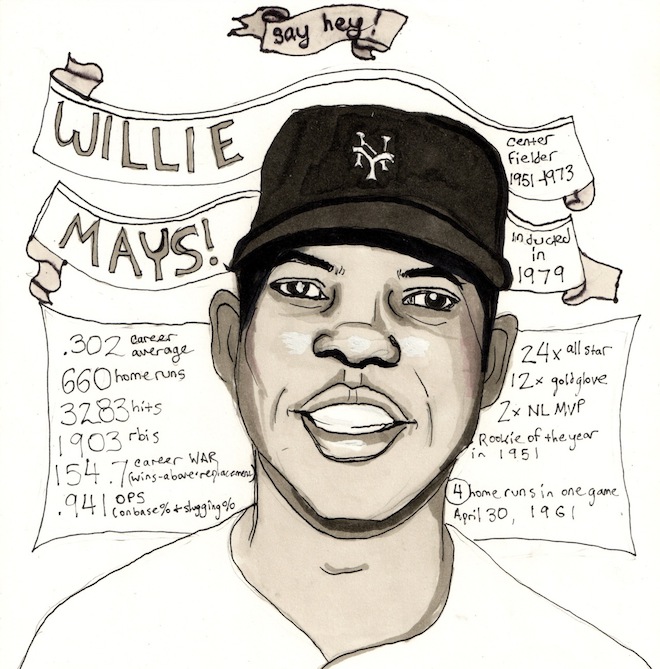 When Willie Mays returned to New York, many saw it—may God forgive them—as a trade to be debated on the merits of statistics. Could the forty-one-year-old center fielder with ascending temperament and waning batting average help the Mets?

To those of us who spent our boyhood, our teens, and our beer-swilling days debating who was the first person of the Holy Trinity—Mantle, Snider, or Mays?—it was a lover’s reprieve from limbo. No matter how Amazin’ the Mets were, a part of our hearts was in San Francisco.

Mays was special to me as a teenager because I was a Giant fan in that vociferous borough of Brooklyn. This affliction was cast on me by a Galway father who reasoned that any team good enough for John McGraw was good enough for him and his offspring. So as boys, rather than take a twenty minute saunter through Prospect Park to Ebbets Field, the Flahertys took their odyssey to 155th Street, the Polo Grounds.

In that sprawling boardinghouse of a park I had to content myself with the likes of Billy Jurges, Buddy Kerr, and a near retirement Mel Ott whose kicking right leg at the plate was then a memory, no longer an azimuth which his home run followed. The enemy was as star laden as MGM: Reese, Robinson, Furillo, Cox, Hodges, Campanella, et al. So when Willie arrived in 1950, the Davids in Flatbush who had been hoping for a slingshot instead were bequeathed the jawbone of an ass.

Willie, like Scott Fitzgerald’s rich, is very different from you and me.

Of course, we did have Sal Maglie, that living insult to Gillette, who thought the shortest distance between two points was a curve. But it was Willie who did it. It was he who gave the aliens in that Toonerville Trolleyland respectability. Even the enemy fan was in awe of him. He was no Plimptonesque hero about whom the beer drinkers in the stands fantasized. He was beyond that. His body was forged on another planet, and intelligent grown men know they have no truck with the citizens of Krypton. It has always amazed me to hear someone taking verbal vapors over the physical exploits of a ballet dancer while demeaning the skills of a baseball player. After all, is it not true that such as a Nureyev is practiced and choreographically moribund within a precise orbit I should swoon at such limited geography, when I have seen Mays ad lib across a prairie to haul down Vic Wertz’s 1954 World Series drive? No. Willie, like Scott Fitzgerald’s rich, is very different from you and me.

Yet, looking back on him (call it mysticism, if you like), I have the feeling his comet could have sputtered. This fall from grace, I feel, could have happened if he had come to bat in the final playoff game against the Dodgers in 1951. I was in the stands with a bevy of other hooky players, and I can’t help thinking Mays would have failed dismally if he had to come to the plate. He was just too young, a kid constantly trying to please his surrogate father, Durocher. Something dire surely would have happened: The bat would have fallen from his hands, or he would have lunged at the ball the way a drunk mounts stairs. Of course, this is all conjecture, since Bobby Thomson’s home run was his reprieve.

Still, let the mind’s eye conjure up the jubilant scene at home plate as the Giants formed a horseshoe to greet Thomson. Willie, who was on deck, should have been one of the inner circle, but he was on its outer fringes—at first too paralyzed to move, then a chocolate pogo stick trying to leap over the mob, leaping higher than all, which is an appropriate reaction from a man who has just received the midnight call from the governor.

Shea Stadium is built like a bowl, and when one sits high up, he feels like a fly who can’t get down to the fudge at the bottom.

But that’s rumination in the record book. Now, the day is Sunday, May 14, 1972, the opponent those lamisters from Coogan’s Bluff, Willie’s recent alma mater, the San Francisco Giants. The day was neither airy spring nor balmy summer but overcast and rain-threatening. I liked that—the gods were being accurate. This was no sun-drenched debut of a rookie; the sky bespoke forty-one years.

The park was as displeasing as usual. Shea Stadium is built like a bowl, and when one sits high up, he feels like a fly who can’t get down to the fudge at the bottom. An ideal baseball park is one that forces its fans to bend over in concentration, like a communion of upside down L’s. Ebbets Field was such a park.

The fans at Shea have always been too anemic for me. Even the kids with their heralded signs seem like groupies for the Rotarians or the Junior Chamber of Commerce: “Hicksville Loves the Mets,” “Huntington Loves the Mets”; alas, Babylon can’t be far behind. And today the crowd was behaving badly, like an affectionate sheepdog that drools all over you. Imagine, they were cheering Willie Mays for warming up on the sidelines with Jim Fregosi! A Little League of the mind.

But there were dots of magic sprinkled throughout the meringue. The long-ago-remembered black men and women from the subway wars also were in attendance: the men in their straw hats, alternating a cigar and a beer under the awnings of their mustaches; the women, grown slightly wide with age, bouquet bottoms (greens, reds, yellows, purples) sashaying full bloom. These couples wouldn’t yell “Charge” when the organ demanded it (a dismal, insulting gift from the Los Angeles Dodgers), nor would they cheer a sideline game of catch. They were sophisticates; they had seen the gods cavort in too many Series to pay tribute to curtain-raising antics.

Mays was in the lead-off spot, and one watched him closely for decay. Many aging ballplayers go all at once, and the pundits were playing taps for Willie. This (and a .163 batting average) roused speculation about Mays’ demise. Nothing much was learned from his first at bat. He backed away from “Sudden Sam” McDowell’s inside fast ball, a trait that is much more noticeable in him lately against pitchers who throw inside smoke. But he wasn’t feverishly bailing out, just apprehensively stepping back. Not a deplorable physical indignity but a small one, like an elegant man in a homburg nodding off in a hot subway. He walked, as did Harrelson and Agee after him. Then Staub, as if disturbed by the clutter, cleaned the bases with a grand slam. Mets 4–0.

His second time at bat I noticed he shops more for his pitches these days. There is a slight begging quality, where once there was unbridled aggressiveness. This time patience paid a price, and he was caught looking at a third strike. This was more disturbing. The head of the man in the homburg had just fallen on the shoulder of the woman next to him.

He still had enough skill to be a “good ballplayer,” though such a fair, adequate adjective was never meant to be applied to him.

In the top of the fifth the Giants roughed up Met pitcher Ray Sadecki for four runs. Also in the course of their rally they pinch-hit for their lefty McDowell, which meant that Mays would have to hit against the Giants’ tall, hard-throwing right-hander Don Carrithers in the Mets’ bottom half. Bad omens abounded. If a left-hander could brush Willie back, what would a right-hander do? And now the game was tied, and he would have to abandon caution. Worse, the crowd was demanding a miracle, the same damn crowd which had cheered even his previous strikeout. The unintelligent love was sickening. He was an old man; let him bring back the skeleton of a fish, a single, this aging fan’s mind reasoned.

But one should not try to transmute the limitations that time has dealt him on the blessed. Even the former residents of Mount Olympus now and then remember their original address. Mays hit a 3-2 pitch toward the power alley in left center—a double, to be sure. I found myself standing, body bent backward like a saxophone player humping a melody, ’til the ball cleared the fence for a home run. The rest was the simple tension of watching Jim McAndrew in relief hold the Giants for four innings, which he did, and the Mets won, 5–4.

The trip home was romance tainted with reality. I knew well that Mays would have his handful of days like this. He still had enough skill to be a “good ballplayer,” though such a fair, adequate adjective was never meant to be applied to him. But life can’t be lived in a trunk, so I closed the lid on the memory of his lightning, and for a day, like an aging roué who has to shore up the present, I boldly claimed: “Love Is Better the Second Time Around.”