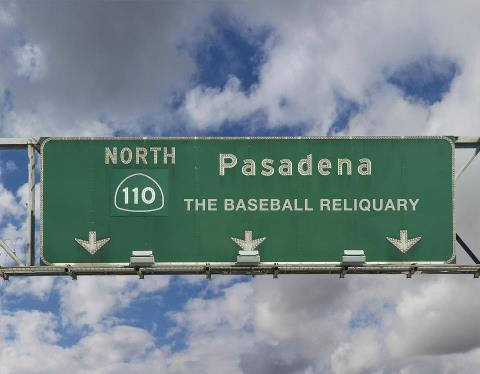 By its name alone, the Baseball Reliquary was unique, for who besides those taught by knuckle-rapping nuns knew what a reliquary was? (Answer: a receptacle for storing religious artifacts.) Right there you have your first taste of Terry Cannon’s impish sense of humor. Terry guided the Reliquary into existence by reaching out to fans who looked beyond big names and ballooning salaries and saw the game as a rich cultural stew. If the organization’s high-falutin’ name troubled anybody, they were soon pacified by Terry’s idea of religious artifacts: Hilda Chester’s cowbell and Eddie Gaedel’s jockstrap.

Gaedel was what we now call a little person. He stood 43 inches short, weighed 65 pounds, and wore number 1/8 on his back when Bill Veeck, the rascal who owned the 1951 St. Louis Browns, sent him up to pinch-hit. He walked on four pitches and the lords of baseball—those spoil sports—said never again. So it was that Gaedel became the perfect Reliquary hero 45 years before the Pasadena-based Reliquary came into existence. No wonder the mere mention of his name set Terry Cannon to happily banging on the cowbell that Hilda Chester wielded when the Dodgers were in Brooklyn and she was the sulfur-tongued doyenne of Ebbets Field.

This was history as Terry loved it—irreverent, full-blooded, rich in character, boundary-defying. Sometimes it was even better than that. Consider Dock Ellis’s induction into the Shrine of the Eternals, the Reliquary’s answer to the Hall of Fame. Yes, the same Dock Ellis who once claimed he pitched a no-hitter on acid. He showed a different side of himself when he got so choked up that it looked like he’d never deliver his thank-you speech. Then Terry’s wife, Mary, signing from a seat next to Ellis onstage, reached over and patted his hand until he could collect himself. It was the play of the day.

There were no such golden moments at this year’s induction ceremony. There was no ceremony at all due to COVID-19. But the bad news didn’t end there. On Saturday the worst of it arrived: Terry Cannon was dead less than a month shy of his 67th birthday. He had battled a merciless form of liver cancer for two years, endured an 11-hour operation, and followed doctor’s orders down to the last pill. And still he was gone.

The life he led was a good one. Even when he was doing scut work for his father’s small publishing company, he left his fingerprints on Skinned Knuckles: The Journal of Automotive Restoration. Ultimately, however, his passions were what defined him, not just baseball but his encyclopedic knowledge of jazz and his fascination with experimental films. He could even hold his own in a conversation about professional wrestling by invoking the names of Dick the Bruiser and Bobo Brazil.

But you could know Terry a long time and never hear him bring up the subject of money. He needed it, of course, we all do, but it was as if he had taken a vow not to let it turn him someone he wasn’t. The work was what mattered, enjoying it and doing it well, then sharing it with kindred spirits or making believers of those who had yet to commit to the things that provided his psychic income. He was a pied piper in that regard, so at ease in his own skin that he could weave a spell over people almost without realizing it.

He was a laugher and a talker, too, especially when Mary was at his side and they were tracking down the next cheeseburger or burrito that couldn’t be missed. In the process the two of them befriended café owners, waitresses and dishwashers. But their best friends of all may have been the fresh-off-the-boat students they knew from Alhambra High School, where Mary taught English forever and Terry worked in the library for a spell. They made a point of taking those kids, most of them Chinese, out for their first true American meal—a burger, fries and a milk shake. In return the kids who wanted to become medical doctors promised they would take care of Terry and Mary for free.

Now Terry’s form of diplomacy will be one more accomplishment to talk about whenever he is remembered. But a betting man would say that baseball and the Reliquary will always come first. It was Terry, after all, who created the atmosphere that welcomed Pete Rose and Maury Wills into the Shrine of the Eternals. Rose didn’t show up for the ceremony—the next baseball card show he misses will be the first—but Wills wept tears of gratitude when he was honored for bringing speed back to the game for one last glorious burst.

Then there was Steve Bilko, whose unstoppable slugging made him the king of Los Angeles in its last years as a minor league town. And the list rolled on to include Negro Leaguers and the women who had a league of their own and the Mexican-American teams that provided heroes for East L.A.

Nobody went forgotten when Terry was at the controls. He created awards for writers, historians and, God bless ’em, fans because he couldn’t imagine a world without that guy in Cleveland who sits out in the bleachers and pounds his drum day and night until the last Indian is out. Terry was a fan, too—the Tigers were his team—but more than that, he was an enthusiast and a collector who never would have been satisfied with just a cow bell and a tiny jock. The enormity of what he gathered was one of the forces that led to the creation of the Institute for Baseball Studies at Whittier College, and it is looking for more storage space already.

The search will seem strange without Terry around to share arcane facts, contemplate Elvis’s death, and debate whether it was more satisfying to honor Bill Veeck, baseball’s last maverick team owner, or to tweak Tommy Lasorda. Or maybe seeing Steve Dalkowski go into the Shrine topped them all. He was a scrawny left-hander who could throw a ball at speeds that resembled car clockings from the Bonneville Salt Flats, but he had an easier time draining a bottle of brown whiskey than he did throwing a strike. He made it through his trip to Pasadena without incident, though, and when he got back home, he told his sister, “I did good, didn’t I?”

It was a story to remember Dalkowski by, but it is remembered now because of the joy Terry Cannon took in telling it. There was a smile on his face and a permanent place in his heart for one more lost angel who’d been found.