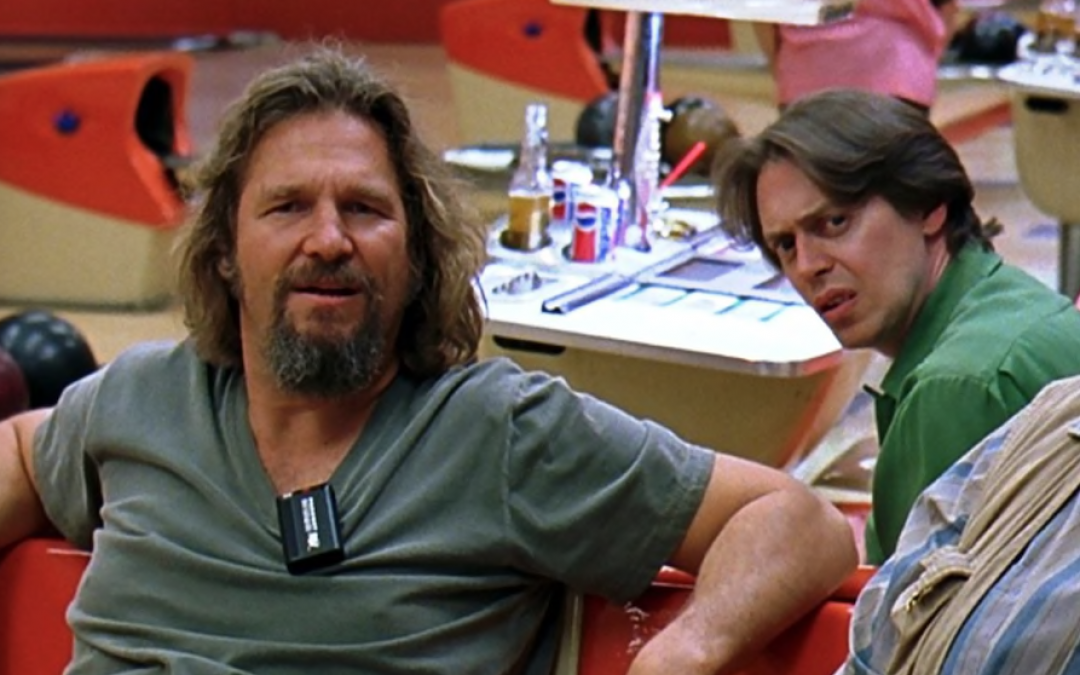 But somehow, as so often happens, Bridges is the still center of the action. The angrier and louder Walter grows, the quieter Bridges’ character, the Dude—a chronically stoned slacker who lives to bowl and avoid conflict—seems to become.

As the shoot treads near chaos—sweet‑tempered Gilmore muffs lines, and a Pomeranian named Bugsy frantically yaps and leaps four times his height on (and off) cue—Bridges, 48, and 40‑odd films into his career, doesn’t fluster. He leans back with an empathetic grin for Gilmore, with whom he has often sung and picked guitar, and tosses off repeat takes of the Dude’s sloe‑eyed weariness at the sight of Walter brandishing a .45 at Smokey. Bugsy, meanwhile, keeps vaulting out of frame. Finally, Joel Coen orders film to roll, and the lines all fall in neatly even as Bugsy orbits into just the right air space. Bridges looks at the panting stunt dog with something like admiration. “He saved it,” he says, “for the shot.”

“Jeff was the first actor I think we’ve ever worked with who uses video playback very constructively,” says Joel Coen.

Bridges is the kind of gently aging pro who takes his lessons where he finds them. He may be known for his meticulous preparation, but what makes him an artist—“the best actor alive,” The New Yorker’s Terrence Rafferty almost casually called him—is his openness to inspiration and his ability to make a scene cohere around the unspectacular but utterly believable reality he supplies. “It’s like watching a diamond cutter,” says Goodman. “When you look at the diamond, you don’t think of the work. You just notice there’s no flaws.”

Joel Coen, nominally the director but, in legend and practice, partners with his producer and brother, Ethan, discovered that while he didn’t have to edit Bridges much (“His choices are usually right on”), the actor himself bore down on every scene. “Jeff was the first actor I think we’ve ever worked with who uses video playback very constructively,” says Joel Coen. “He does a take, and then he’ll look at all or part of what he’s just done and he’ll make minor, sometimes very subtle adjustments based on what he’s seen on the monitor. Which I find interesting, especially for an actor who probably did 25 movies before there was video playback.”

It has become a convention, right after mentioning the actor’s steady productivity, to cluck over the fact that he’s not a slam‑dunk bankable leading man on the order of, say, Harrison Ford or Mel Gibson. This is followed by some hand wringing over his presumed statue envy—three Academy Award nominations (The Last Picture Show, Thunderbolt and Lightfoot and Starman) without a win. And although those shopworn subjects bring a wry smile to Bridges’ face, his patience stays intact as he discusses how he chooses roles: “It’s not really part of the process—you know, saying, ‘We got to find out what’s going to be that one big box‑office smash to put you over the top.’ I enjoy my career, and I almost prefer to play from the underdog position—not to be like, ‘I’m the award‑winning, big‑box‑office, wait‑till‑you‑see‑the‑next‑one guy.’ That’s not really my style and not the kind of pressure I’d want to put on myself.”

This sentiment is delivered from a half-slouch in a Los Angeles restaurant where the waiter has successfully tempted Bridges to order a glass of fine tequila (“Double, on the rocks”). What’s left of the Dude, some months after The Big Lebowski has wrapped, is a deep streak of liberal humanism (the Dude claimed student‑radical roots; Bridges is the bellwether of a committed group called the End Hunger Network) and a much mentioned regular‑guy manner. Bridges tells the tale of meeting his wife of 20 years, Susan Geston, with an undimmed sense of wonder. (She had a pair of black eyes from an accident, and somebody took a still‑surviving snapshot of him looking awestruck at the moment he spotted her across the Montana restaurant where she was waitressing.) And he talks about his daughters (Isabelle, 16, Jesse, 14, and Haley, 12) with a full measure of the fond tremulousness any man would show with three girls marching through adolescence before his eyes. “He’s really happiest at home with his family,” says brother Beau, 56. “He enjoys them thoroughly. Jeff is a really good listener, I think, with his children. He is a good ear, and he’s sort of a quiet leader for them.”

“He is not the kind of movie star who develops a consistent persona with the public so that they flock in, expecting the same persona in film after film.”

Bridges’ own adolescence was a prolonged one. A brother born before him, Garrett, succumbed to crib death, and mom Dorothy (who would have daughter Lucinda eight years after Jeff’s arrival) spent many nights sleeping alongside the infant Jeff with a hand on leg or arm, watchful. Bridges did his debut film scene as a babe in arms before his first birthday and graduated to episodic shots on Lassie and on Sea Hunt, the TV series that made father Lloyd an icon in a dive mask. One of Bridges’ bigger breaks came when his brother met with director John Huston for the part of a small‑time boxer in 1972’s Fat City and was told he’d be perfect if he were 10 years younger; enter Bridges, who flew to Madrid to meet Huston. Bridges picked up a woman in his hotel, went out late for wine and funky shellfish, and spent the next day in the Prado Museum trying not to blow lunch. “I’m just so glad I didn’t throw up on him,” recalls Bridges with a laugh.

Nonetheless, it was an auspicious foray into the movie business, and Bridges quickly established himself as a leading man to watch. With the exception of 1985’s Jagged Edge and 1989’s The Fabulous Baker Boys, however, the Bridges filmography does not scream “hits.” But it consistently whispers “great performance,” not only for his Oscar‑nominated roles but for such lesser‑seen films as 1981’s Cutter’s Way, 1988’s Tucker and 1993’s American Heart.

There’s probably not enough Patron tequila in Los Angeles to draw out Bridges’ innermost complaints about The Mirror Has Two Faces, in which he starred opposite Barbra Strei­sand, but suffice it to say that, doing a befuddled, Ralph Bellamy‑esque turn as a man trying not to fall into bed with a sacred monster, Bridges never lost his dignity.

To rebound from that movie by playing a bakehead for the filmmaking team coming off Fargo would look like a welcome respite, but as always, Bridges wavered before signing on for The Big Lebowski. “Because he does commit so fully, he takes some time before making that jump,” says Joel Coen. “He wasn’t ‘difficult,’ but he did do that circling for a while.” One factor in Bridges’ planning was his wish to get Son of the Circus, a rendition of the John Irving novel, set in India and to be directed by American Heart’s Martin Bell, under way. Bridges and the producers fought to get financing until India’s rainy season finally helped slam the window shut. But the question persists: How deeply flawed is the Hollywood system when one of our greatest actors has trouble mounting the film adaptation of a best seller?

“It may be the fact,” says Joel Coen, “that he is not the kind of movie star who develops a consistent persona with the public so that they flock in, expecting the same persona in film after film. From a commercial point of view, it’s harder to become a star that way.” (Bridges determinedly finds his own path; in 1996 he produced a gritty drama about homelessness called Hidden in America, starring his brother, for Showtime.)

With a respectable measure of tequila left in his glass, Bridges gets ready to go to his folks’ Westwood home for one of his mom and sister’s informal theatrical salons. He and his brother will perform a skit they once did to open Saturday Night Live: a chat that turns into a spat and then a fight. (This, despite the infamous moment in The Fabulous Baker Boys when Bridges very nearly broke his brother’s hand during a staged fight: “We had this idea that I was going to mess with this piano guy’s fingers. And what we failed to do was give a word that meant stop. So, when [Beau] said, ‘Stop, you’re hurting me,’ I thought, oh, you’re acting your ass off, sucker. I actually sent him to the hospital. I felt bad about that.”) Dad Lloyd has been having some health problems, and Bridges, getting ready to head off and shoot a thriller in Texas, is in a mood to huddle with family before departing. In any event, everyone is expecting a good show from the brothers, and Bridges seems appropriately eager and apprehensive. But for tonight’s performance at least, one dramatic challenge is taken care of. “We don’t have to act brothers,” says Bridges with a grin. “That was handled 40 years ago.”