The Making of “Fat City” 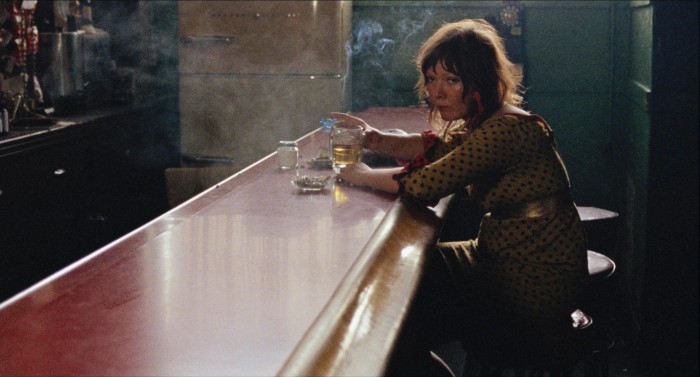 The scene called for Billy Tully, played by Stacey Keach, to be thinning and weeding young tomatoes under a broiling sun. It’s sweaty, backbreaking working that must, because of the delicacy required, be done with a short, 18-inch hoe. As the script says, “He stands erect, grimacing from pain, holding the small of his back.”

“How long before you get used to this, anyway?” says Tully.

The answer is never, and it’s part of the terror of Fat City, a grim little novel by Leonard Gardner, set in his hometown, Stockton, Calif., that turned out, prophetically, to be about the kind of people who were murdered in nearby Yuba City and, even more sadly in a way, were never missed. Itinerant farm workers, scratching out a crummy existence, going into the prize ring some of them, in search of the glory and money they could find no other way and, of course, ending up only with more pain and emptiness.

And somehow this scene with the tomatoes told a great deal about the dinginess and the hopelessness of the lives. So John Huston, the director, who like Tully is making a bit of a comeback, wanted to stretch the scene. He asked Gardner, who also wrote the screenplay, for some additional dialogue. Gardner was glad to oblige. Writers on movie sets are about as necessary as a fifth a bridge, and as welcome. He was happy, he recalls, to feel part of the action.

Gardner filled in with a monologue by one of the black workers about how he lost his wife because of wine and roses, both enjoyed with a neighbor lady. It worked fine and Huston was delighted. The scene was shot on a farm in the San Joaquin Valley, just outside Stockton; the men digging close to the soil, streaked with dirt and the salt of their sweat, working, talking, hoping, dying together in sun, alone.

Then the technicians looked at the rushes and decided it wouldn’t do. The light wasn’t right on the faces. The big camera couldn’t get down low enough. The footage was useless. Look, couldn’t Gardner set the scene in a cannery?

Writers on movie sets are about as necessary as a fifth a bridge, and as welcome.

Gardner slapped himself on the head as he told the story. He is 37 years old, looks much younger and has produced several short stories in addition to Fat City. Fat City (meaning “making it”) was highly praised and sold well. He received $50,000 for the screen rights from Columbia and as much again for writing the script.

A cannery! That would be like setting the Crucifixion in Anchorage. The point was the heat, seat and pain. What happens in a cannery is, er, another kettle of fish. So Gardner was adamant. No cannery. Well, how about longer hoes, so there could be some light on the facts? How long? Just a little longer. “When they shot the scene,” Gardner said, “there they were with those six-foot hoes, standing straight up, and Tully says, ‘How long before you get used to this?’ Used to what?” He shook his head in wonderment.

“You know, it’s really a victory,” he said. “At least they’re still hoeing. It could have been worse.”

And sometimes it is, it is. No only in Fat City, but in every flick that has any pretensions toward art. For art is the first give. Technology, box office, a scene that exists only in the head of the producer’s wife, all come first. Which is why, probably, people like Gardner, men who are willing to turn their books into screenplays, are increasingly rare. “I’ll never write another movie,” Gardner told an interviewer on one of his more bitter days. Then he sort of wanted to take it back. “That’s like a drunk saying he’s never going to have another drink,” Gardner said. “He’s a self-effacing young man, the kind you have to search for in a crowded room, and so quiet-spoken you find yourself leaning closer and closer to him, cocking an ear, as he talks.

What Gardner seemed to mean is that yes, there were difficulties, but no, he didn’t want to put the knock on Huston or anybody else. “I had my visions,” he said, whispering almost, “and they had to be transformed into live people. In casting, it’s easy to get perfectionist and then tense.”

Fat City presented a great many special difficulties, largely because it is, like its creator, so low-key it is understandable that Huston kept trying to jazz things up—a fake dream sequence here, a knockdown that wasn’t in the script there. Gardner argued, cajoled, fought when he felt he had to.  Even so, scenes he never dreamed showed up in the rushes filmed, ready to go. “There is a tendency to overdo everything,” Gardner said, “to lay it on with a trowel. The movie winds up being both cruder and simpler than the book. Somehow the irony is gone.”

The fight scenes were the most difficult, probably for the same reason sporting contests never seem real in the movies. Too much is demanded of them. Games are exciting enough by themselves. In the movies, somehow somebody has to be ready to die too. Then there is a special difficulty about fight scenes. If fighters actually hit each other the way they do on the silver screen, there would be no fighters, just dead men. The movie thud of boxing glove on flesh has become so ingrained in the American psyche that Jim Jacobs, who puts together old fight films and does it well, felt it necessary to dub in fake splats and thunks on real fights.

None of that for Huston, of course. Baggy-eyes, seamy-faced, a large man gone heavy around the middle, seemingly more interested in his cigars than the movie he was making (when asked what directorial rapport had been established with Huston, Keach shrugged and said, “We play a lot of backgammon”), Huston promised this would be no Hollywood boxing movie. “I did some boxing myself,” Huston said. “I’d see those movies and laugh—the same way I’d laugh at movies about painters.”

Well then, how did he plan to put realism into the Fat City fight sequences? Simple, he said. He was going to turn his actors into fighters. Simpler said that done. There are two main boxing actors in the picture. Jeff Bridges, son of Lloyd, plays Ernie Munger, and up-and-coming young failure. Keach plays Tully coming back from a pause in a mediocre career. Keach took boxing lessons from Jose Torres, former light-heavyweight champion. On the set, the Stockton Civic Memorial Auditorium, the local fight club (smoke courtesy of a machine that vaporizes mineral oil), Al Silvani, an old ring hand for such as Jake La Motta and Rocky Graziano, gave instructions and acted as referee. Huston was impressed.

There was doubt, obviously, that the unrelieved gloom of Gardner’s novel, and his script, would make a movie anybody would want to see.

“The other day Jeff was boxing with a professional,” Huston said over a salad lunch at the Auditorium during the shooting. “I thought he could have taken him. I think he’s become a very good boxer. So has Stacy.”

Maybe so, but Gardner, who put on the gloves himself a few times as a lad, took one look at Bridges, supposedly impressing Tully in the ring, and said, “Jeff was only pawing at him.” As for Keach, he is a plodding, flat-footed light heavyweight to Tully’s rather stylish lightweight.

Gardner said he didn’t mind. “Tully was a better fighter, but I can see him as a brawler,” he whispered. Still, despite Torres and Silvani, the style of the ring came hard to Keach. He couldn’t remember to keep his chin tucked in and his aggression took the form of heavy-shouldered, inelegant lunges. “I have developed a healthy respect for fighters,” Keach said. “When I first started, I felt very awkward. And I still can’t keep my chin down. But when I saw the film, I believe it was a fight.”

The miracles that can be wrought by the camera are endless. “You can always cut to something else,” Huston said, trying to look sly, succeeding only in looking as though he was on the rack. So what comes out may be a pretty good fight movie at that. Yet I find it difficult to believe that the authenticity Huston thought he had will be there. Fighters don’t telegraph punches that way, they don’t even clinch that way. Sixto Rodriguez, a 34-year-old retired middleweight, plays the used-up fighter, Arcadio Lucero, against whom Tully has his big comeback fight. Rodriguez had 54 fights as a professional and made a small name for himself. I asked him why he didn’t point out to the good movie folk that a lot of what was going on in the ring looked as real as a three-dollar bill. He smiled a sad smile. “They want terrific action,” he said in his soft, used boxer’s voice. “It’s hard to tell them their business.”

And an intricate business it is. It starts too early in the morning and goes to late into the evening, and Stacy Keach, who would care about Leonard Gardner’s art if he had time, must think instead about his moments, and few they are, before the camera. “There are about five minutes out of an eight-hour day that you’re working for,” Keach said.

There was doubt, obviously, that the unrelieved gloom of Gardner’s novel, and his script, would make a movie anybody would want to see. The first thing Huston did when he saw the script was rewrite it. Drove Gardner right up the wall. So he went back to the drawing board. He wrote, as he says, “six or seven” drafts before shooting started, and he was able, after all of that, to salvage a lot of his book The finished script was, in fact, remarkably close to the novel. Then, in the screening room one late afternoon, Gardner saw this dream scene. It’s Tully first time around, before his wife had left him, and there he is with her at the fights, being introduced from the ring, big-manning it. It’s a bad scene, and untrue to the book for a variety of reasons. One is that Tully was never that big a man as a boxer.  He couldn’t have been greeted that way, or dressed that way, or behaved that way. It’s a scene out of a different fight film. And Tully’s wife. One of the ironies of the novel is that Tully has, in his mind, built her into a fairy princess. He believes it, and so, in a way, do we. When we see her on the screen, she’s just another blonde going to fat hips. Gardner can only hope the scene winds up on the cutting-room floor.

Then the big fight between Tully and Lucero. Both are in poor shape, and Tully wins it, in the script, by outlasting Lucero. It’s a dull fight. Only that’s not the way Huston filmed it. He put a lot into the fight; “terrific action,” as Rodriguez said. Knockdown include. It made Gardner wince.

So did a scene at the end of the fight in which Tully is pronounced the winner. Eyes glazed, he turns to his second and asks, “What happened? Was I knocked out?”

“It wasn’t my line,” Gardner said, “but it works. It works.” He seemed surprised. Hopefully there will be a lot more surprises. Movies are, after all, made in the cutting room, a place no writer can function. Too dark.